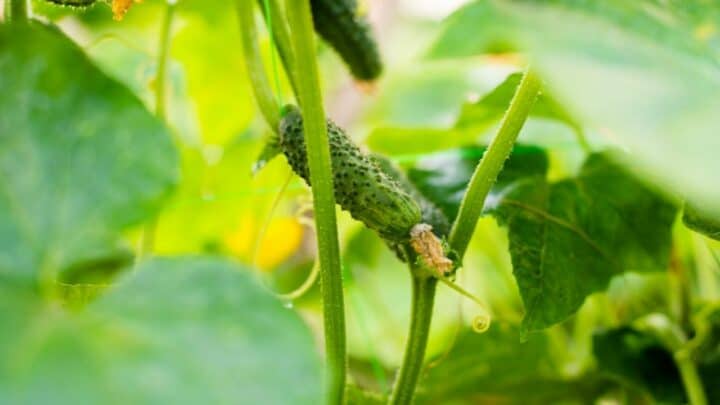 Among the most popular and tastiest vegetables to plant in spring are cucumbers.

The problem is that since they’re either transplanted from very young seedlings or grown from seed, they’re extremely susceptible to disease, particularly fungal diseases.

Discover the soil problems that cause cucumber stem rot, how to treat it, and the mitigation steps to prevent it from occurring in the future.

Stem rot in cucumbers is also called damping off disease. It’s caused by either fusarium, verticillium, or pythium in soil. Early signs are the lower leaves wilting, turning to a darker orange-yellow tinge, then eventually brown. Warm and moist conditions hasten the spread of fungal spores.

Whenever you plant cucumbers, you need to be on the lookout for anything that’ll stunt their growth, let alone threaten to take them out.

The fungus called fusarium oxysporum is the culprit responsible for the death of too many cucumbers every spring.

It’s that same pathogen that’ll wipe out your tomato crops and your basil plants.

It lingers in soil for as long as ten years.

If that’s not bad enough, when it’s spread in the air, like happens in greenhouses, it can survive in the frames, inside potting sheds and even on blocks of rock wool.

Once there’s enough moisture and humidity to activate it, that’s when it strikes.

Just when you think it’s a good time to plant some low maintenance vegetables… within weeks, BAM, fusarium germinates, damping off disease sets in and your plants wilt so hard they hit the deck.

Signs of damping-off disease caused by fusarium in cucumbers

Pythium causes similar symptoms to fusarium, but this will rot the roots and not just the stems.

A conducive environment for its spread is warm, moist climates. It’s possible for cucumbers to grow under moderate temperatures, reach a mature stage, then suddenly wilt like crazy.

The giveaway sign of pythium root rot on cucumber plants are brown lesions at the base of the stem, just above the soil line.

On mature plants, the top leaves wilt by day when the temperatures are warmer, then recover at night.

They will eventually topple and die.

Verticillium wilt is a tricky disease to identify because despite its name, it does not initially cause wilting. It causes yellow spots or brown spots on the leaves of cucumber plants.

It looks like the spots caused by alternaria leaf blight, minus the halos.

However, like pythium, it starts below the soil-line, infects the base of the plant first, then gradually works its way up the plant.

How to prevent cucumber stem rot

Prevention is the ultimate objective to protect against cucumber stem rot. Once any of the above fungi gets into the soil, it can wipe out your entire crop. Not a single plant will be spared.

Do that by controlling the following:

The magic number to have top of mind is 68. Temperatures below 68-Fahrenheit is when fungal spores can germinate. Keep the temperatures higher and it’ll prevent the fungi wreaking havoc in your soil.

Good air circulation is crucial, both around your plants and within the soil. Tilling the soil helps prevent compact soil suffocating the roots.

The added benefit is that the more air pockets there are, the less risk there is water pooling on the surface.

Contaminated tools will spread the fungal spores to any other plant you use the same tools with.

Whenever you need to cut a diseased stem, root, or even a leaf from any plant, clean your scissors or pruners with either rubbing alcohol or a hydrogen peroxide solution.

Use bleach only if you have to. That’s an oxidizing agent that will degrade your pruners and other garden tools.

Prolonged exposure to bleach can cause pitting, and when you have pruners with pits in them, fungal spores can linger there, then transfer to another host plant.

When to use bleach is inside of potting sheds, and/or to sanitize the frame of a greenhouse to eliminate fungal spores.

Use a raised garden bed

Cucumbers are among the best veggies for raised beds, not least because they’re an extremely low-maintenance vegetable, but mainly because the raised bed improves drainage.

There’s a far less likelihood of stem rot getting a foothold in the soil.

How to treat cucumber stem rot

Since the cause is a fungal infection in the soil, and one that can become airborne, there’s no cure for the plant.

You can only treat the soil or growing media with a fungicide.

For organic gardeners, your best organic control of fusarium oxysporum, verticillium, and pythium is neem oil, which is compatible with hydroponic gardening, too.

Bottom line, whenever you’re growing edibles, invest in neem oil. It’s the one product to have in your emergency gardening kit for plant care in the worst of times.

How much watering do cucumber plants need?

Cucumbers fair best when watered sparingly. Drip irrigation systems work well, or deep watering once weekly, letting the soil dry between watering. The less moist the soil, the less chance there is for fungal spores to infect the soil.

Can cucumbers be grown on a trellis?

To grow vertically (on a trellis or other support), you’ll need to choose a vining variety, not a bush type. The advantage is more yield, but if you’ve been troubled with stem rot in the past, the improved air circulation from vertical growing can prevent a repeat of the same problems. 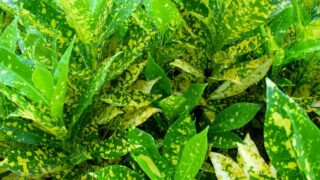 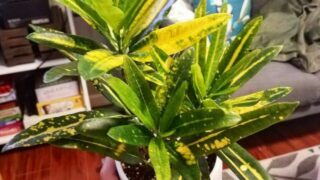