Philodendron birkin is an easy and delightful plant to care for.

Its speedy growth means that Birkin blesses its owner with quick results (none of this bamboo “water me for four years before you see a single shoot nonsense“), which means that gardening errors show up quickly and certainly with Birkin.

Given the right amount of light (no direct sunlight or horror-movie-dark shade) and water (letting the top two inches of soil dry between waterings), your Birkin should do well with very little other input from you, except that it probably won’t!

But how often to fertilize Philodendron birkin?

Philodendron birkin is a man-made Philodendron hybrid and therefore needs extra attention in the form of plant food, aka fertilizer.

I discuss how often you should apply such fertilizer in this article.

How Often to Fertilize Philodendron birkin

Fertilize Philodendron birkin with fertilizer once a month when it needs the extra nutrients during its active growing phase in spring and summer. During autumn and winter, give the plant fertilizer once every other month only as prophylactic against nutrient starvation or when it loses its luster. 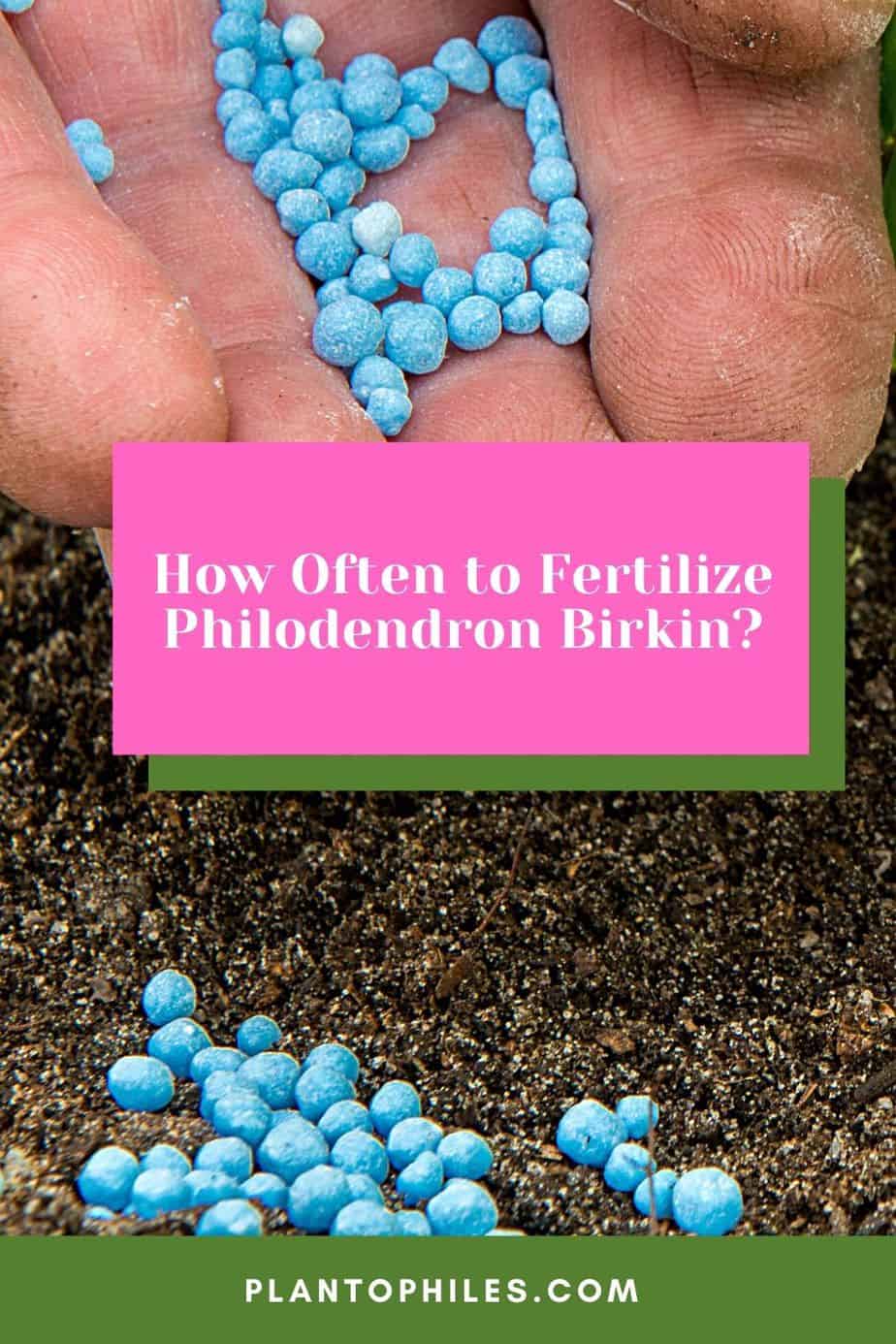 How Often to Fertilize Philodendron birkin?

What Kind of Fertilizer is a ‘Balanced’ Fertilizer, and Why Should I Apply it to Philodendron birkin

Always apply a balanced fertilizer to Philodendron birkin. There are three numbers (NPK) which mean a lot in the world of fertilizers: N (Nitrogen), P (Phosphorus), and K (Potassium).

(Why potassium’s chemical symbol is K is due to a historical curiosity concerning the affectation of the intelligentsia of the Age of Enlightenment to write in Latin. During this period, potassium was named kalium and took the letter K as its symbol. This education article will tell you more if you are interested in such things.)

So anyway, three numbers tell us the proportions of the three most important plant-feeding chemicals.

When Birkin needs its chemical fix, it needs an equal “shot in the arm” from all three elements, which is why it is essential to supply your Birkin with a balanced fertilizer. 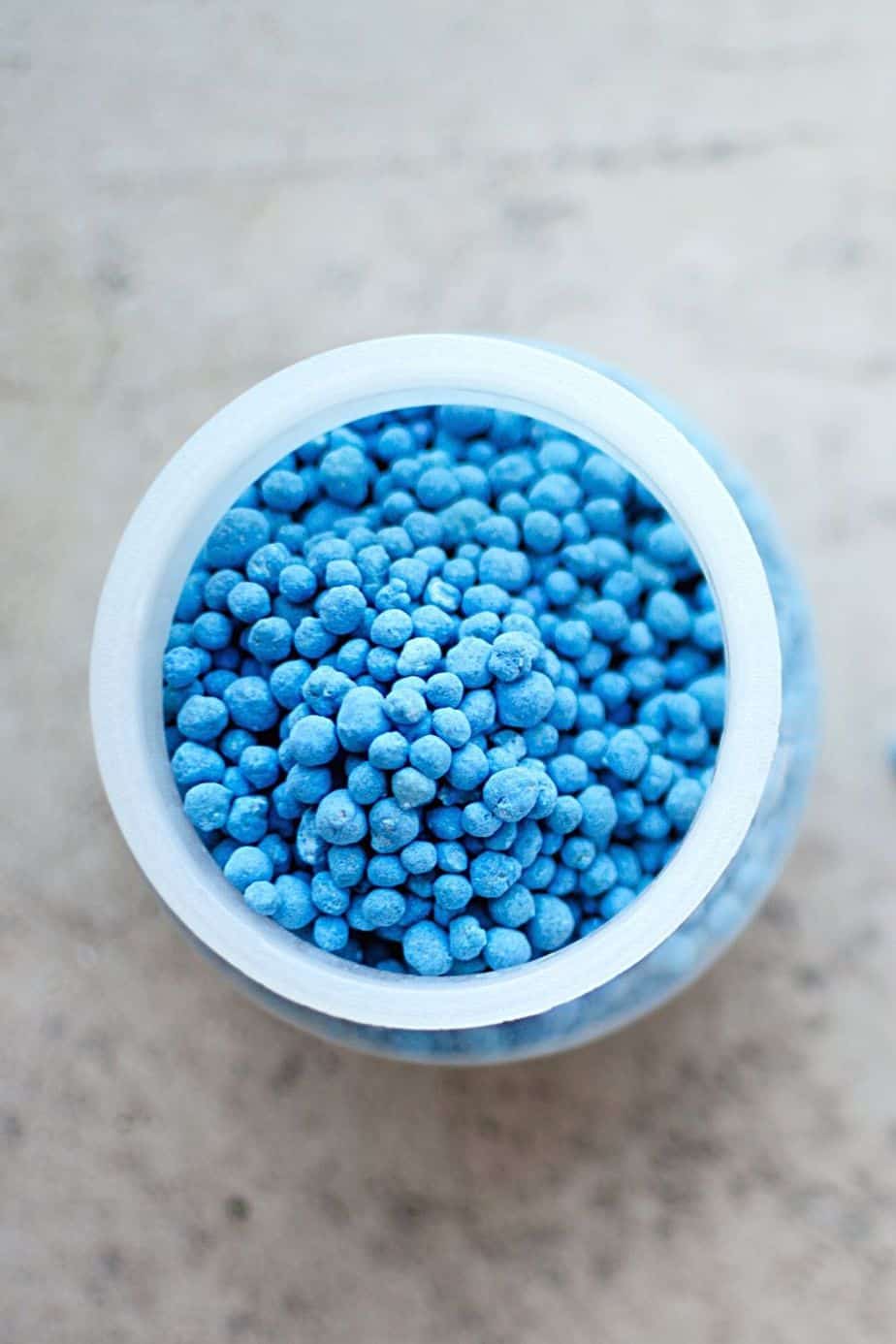 For all that, heed the advice I go into below to use a low-nitrogen fertilizer, one in which the N factor is 10 or less.

Birkin is pretty because of its striations: beautiful streaks of pale cream, white or light green that start out wide at the leaf’s stem and gradually narrow as the stripe approaches the leaf’s edge. 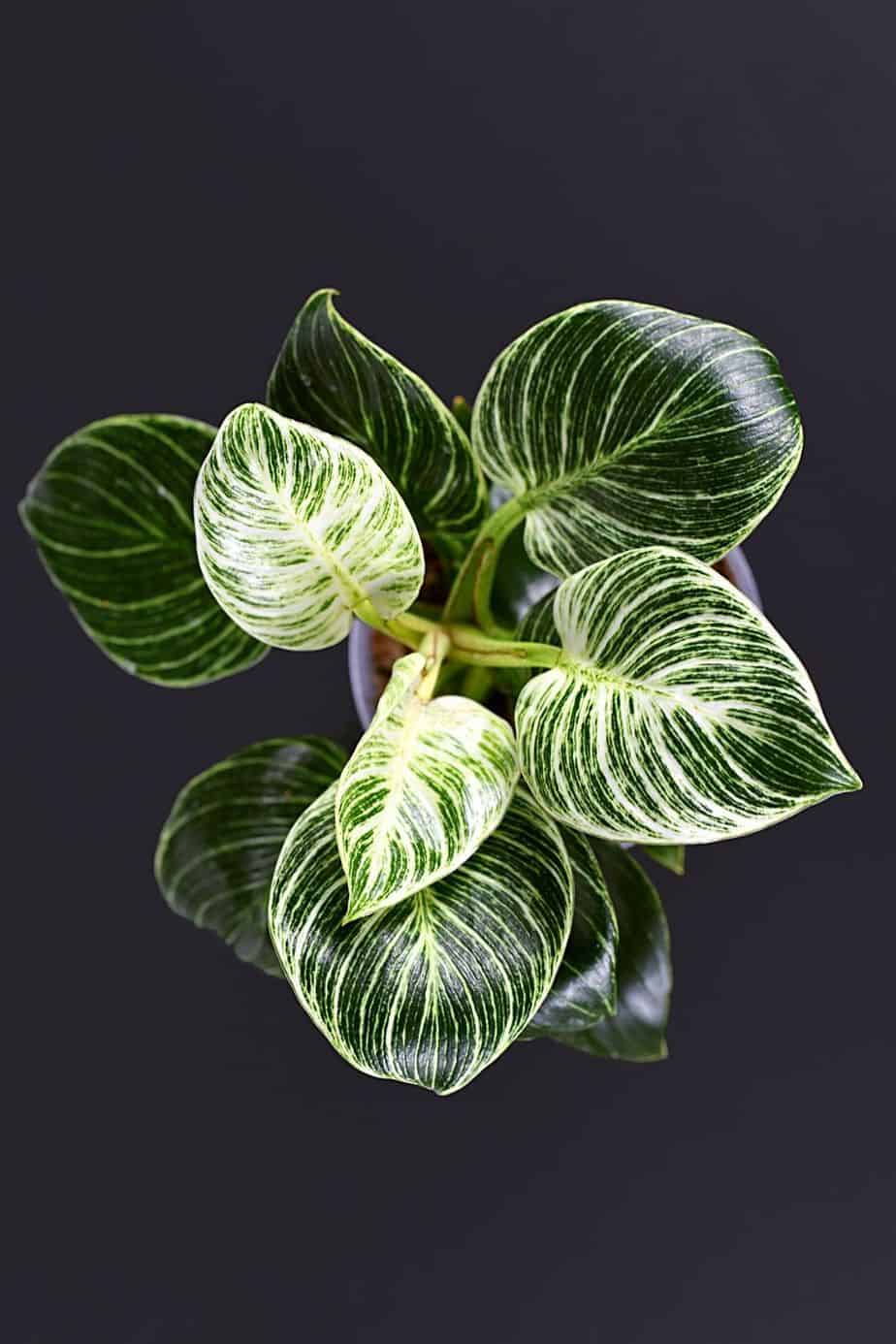 Philodendron birkins are known for their pale cream, white, or light green striations

However, Birkin is actually a hybrid Philodendron. Having these streaks is not its natural condition, so Birkin has a tendency to revert to nature at the drop of a hat whenever it can.

The one thing that can and will help Birkin in this regression is the presence of plenty of delicious nitrogen in the soil.

The action of nitrogen in most plants is to stimulate and boost the production of chlorophyll – the stuff in plants that makes them green.

This green stuff, chlorophyll, is a clever little so-and-so. It helps convert sunlight into energy that plants can then use for their own purposes, such as for powering the growth of roots, stems, branches, and leaves, and sundry other things besides.

The upshot of all this is this: the more nitrogen you make available to your Birkin, the more it will be able to produce chlorophyll, the greener will be its leaves, leaving you in the perplexing and annoying position of having a healthy, bursting-with-vitality Birkin that is stubbornly green and bluntly refuses to offer even the merest sign of variegation. 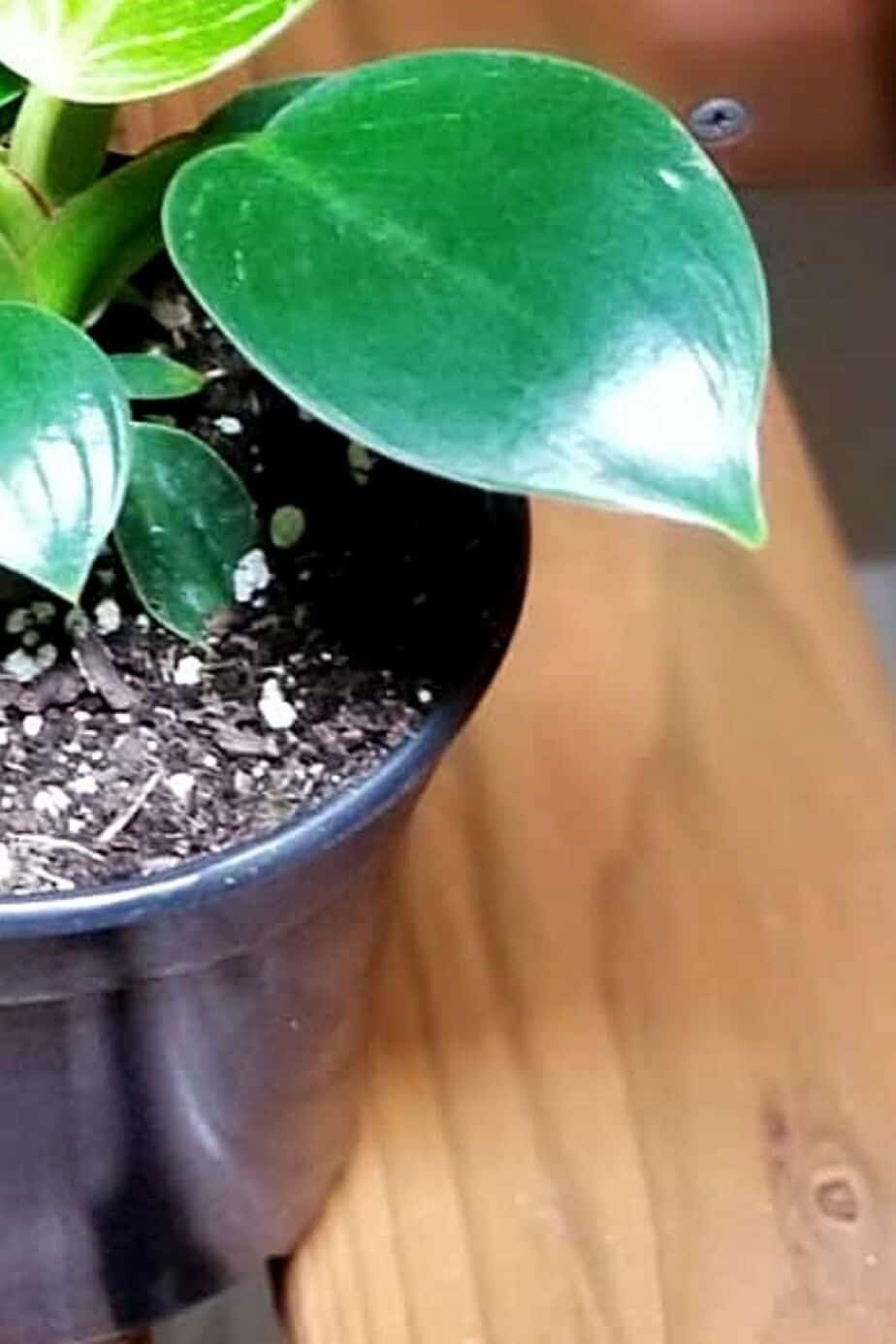 Now you know why that is, and you can fully understand that it’s all your fault for feeding the plant with too much nitrogen.

Birkin is Rojo Congo which has chimerically mutated, meaning some meddling someone has very kindly and excitingly mixed its genes with those of another plant species.

The truth is, of course, that the Birkin itself is in seventh heaven since it can now drop the weird attire and stop pretending it is something it never wanted to be in the first place.

However, I digress. To prevent Birkin from getting too uppity and carefree with its greenery, use a balanced, low-nitrogen fertilizer with one of these NPKs for the best results: 5-5-5, or 10-10-10. 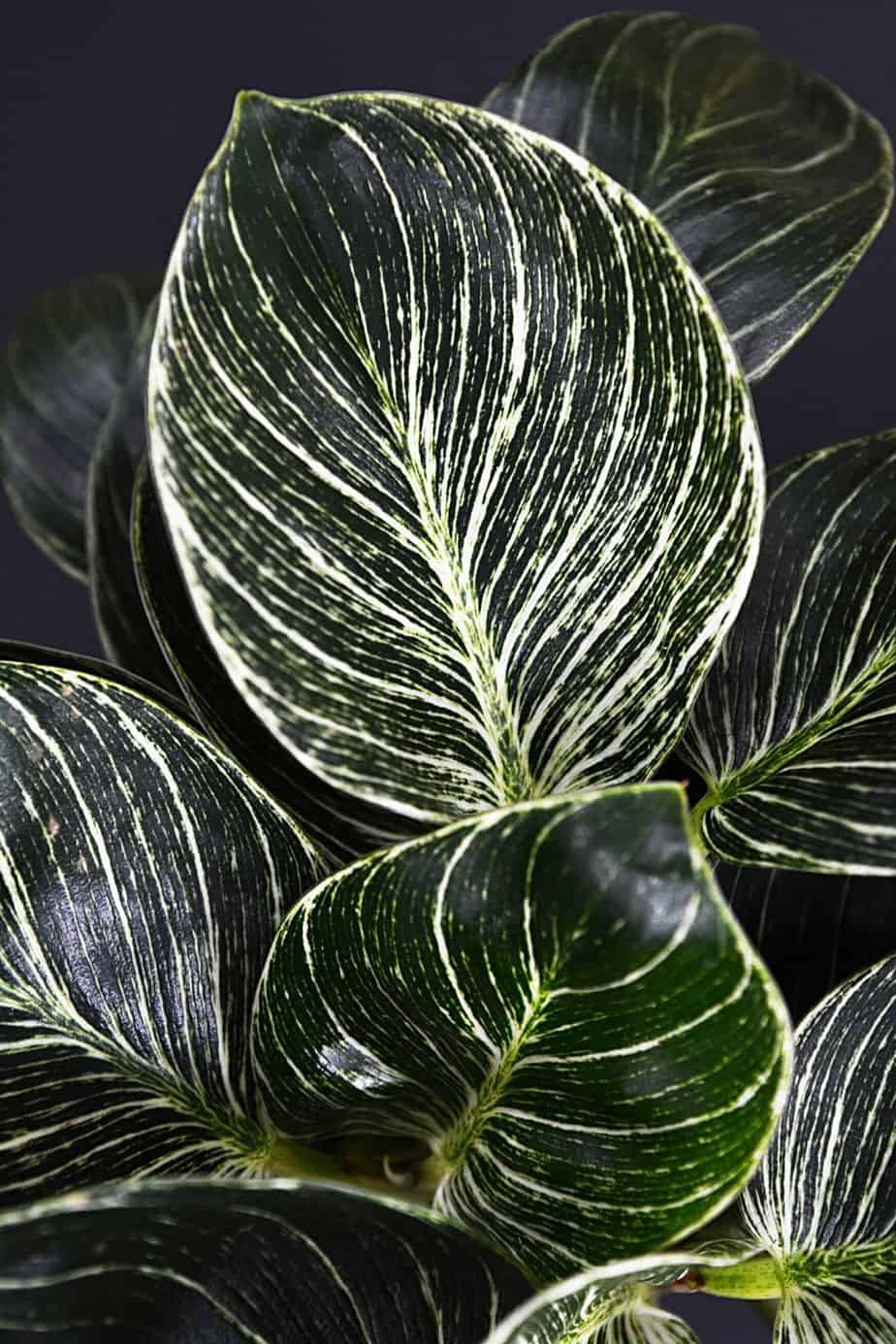 I would also advise that you stick to a monthly replenishment schedule during spring and summertime and a bimonthly schedule in autumn and wintertime.

Use a fertilizer solution you’ve manually watered down to 50% strength because Birkin is a sensitive plant, a lot more delicate than its boisterous growth and exuberant appearance would suggest.

If you use full-strength fertilizer on your Birkin, there is every chance that the plant will wither and might even die.

You can also learn more about how to encourage more variegation on your Philodendron birkin to help you with this problem.

Frequently Asked Questions about How Often to Fertilize Philodendron birkin

How do I know what fertilizer to apply to my Philodendron birkin?

Can I apply natural fertilizer to my Philodendron birkin?

Where Birkin is concerned, especially if you wish to protect its variegations, apply low-nitrogen fertilizer. Natural fertilizers low in nitrogen are non-glossy newspaper paper, bone meal, and human manure. Provided it is the right kind of fertilizer, it shouldn’t hurt your Philodendron birkin.

Some people say I should feed my Philodendron birkin weekly. Why do you say monthly and bimonthly?

Most literature discussing how often to fertilize Philodendron birkin agrees with a monthly growing season schedule, and bi-monthly during its torpid season. Begin with the suggested schedule, but gradually ramp up the frequency.

Philodendron birkin is a lovely plant and is generally hardy and well-behaved.

However, the plant does suffer from malnutrition when left to its own devices, so Birkin owners should apply a specially formulated, or weakened, fertilizer according to a schedule that largely depends on the time of year.

Part and parcel of the care package growers must give Birkin is to carefully address the strength of fertilizer applied, as Birkin’s roots are sensitive and can ‘burn’ if exposed to too strong a fertilizer.