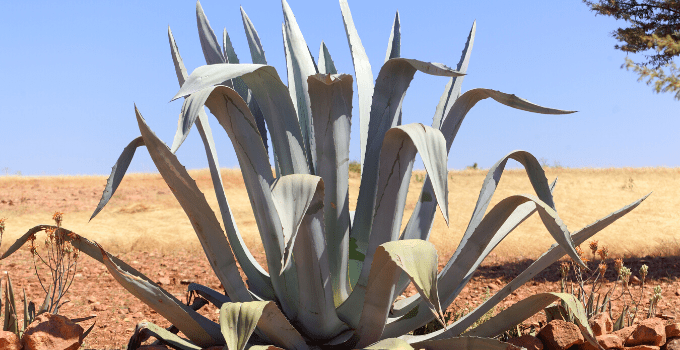 The Century plant, or Agave americana, has a few different names that it goes by. Many have given it the description the Maguey, American Aloe, and the Sentry plant.

This flora is found within the family Asparagaceae, or flowering plants that have long, monocot leaves and flowers that resemble lilies.

They are known for root bounding quite easily, making them a favorite for those who prefer somewhat large potted plants!

Agave americana is naturally found regions of Mexico, Arizona, and Texas, though it has grown in popularity over the years. They are considered relatively easy to grow, especially when placed indoors.

There are a few parameters that you’ll have to meet in order to keep them happy and healthy. We’ve taken the liberty to research these long-living desert dwellers so that you can reap the benefits.

Read on to find out everything you need to know for a vibrant, lush Century plant!

The Century plant is known for being a laid-back grower, surpassing the expectations of most who choose to plant them indoors. They do have a few specific needs in terms of their overall care.

Knowing the preferences for watering, soil type, humidity levels, and more can give you a better chance for nurturing your American Aloe. 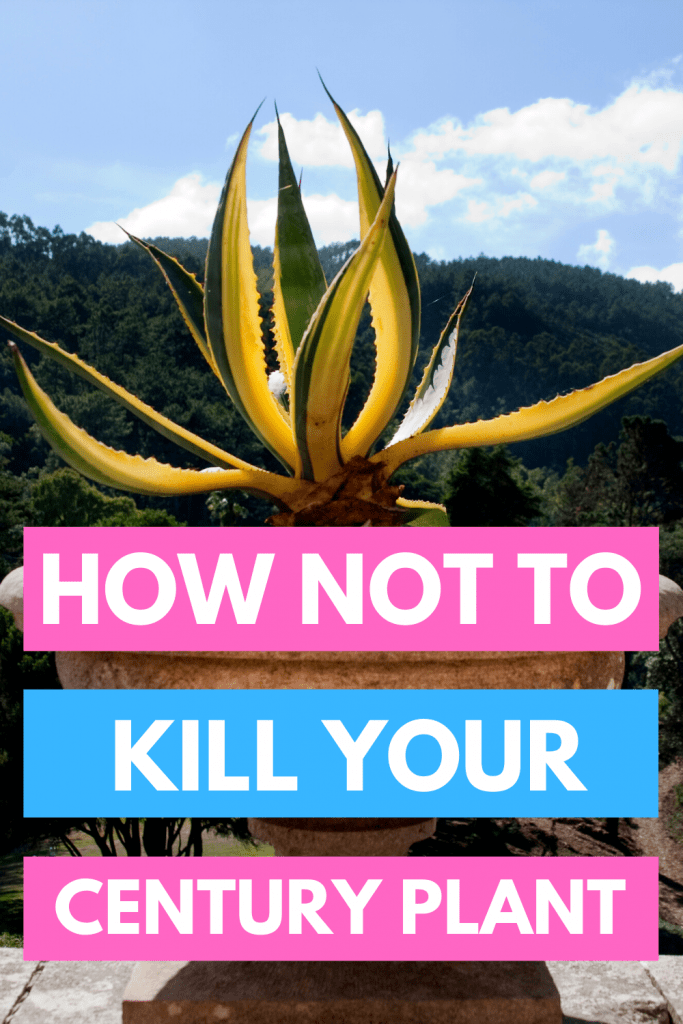 These individuals are found in desert regions, meaning that they’re used to areas with light soil. Potted plants need a mixture of porous soil such as sand, peat, and clay.

The reason for having such a light soil type is due to the poor root system. This allows the nutrients to be absorbed more easily. They should also be provided with plenty of drainage.

They are drought tolerant, but don’t do well when sitting in water for long periods of time.

The Century plant shares the same soil needs as other desert floras. If you’re curious about another similar plant that you can add to your collection, read our article on the 12 best cacti!

As you would assume, the Century plant absolutely adores sun! Being a desert native, they tend to need full sun for the majority of the day. It isn’t the end of the world if you can’t provide this indoors.

Even sitting in shade isn’t detrimental, as long as it is done properly. Gradually transition your Century plant from a room with bright sun to that with shade.

This should be done over the process of two weeks. Any sooner and you can risk burning the foliage. They need time to adjust to the changed circumstances!

The watering needs of a Century plant can depend on a few different variables. The time of year can have an impact. The growing season requires more frequent watering since it goes through a dormant period.

In fact, the winter rarely needs any water at all. Those thick leaves act as storage since it’s been adapted to live in the deserts. Many are happy to find that you only need to add water about once a month.

Any more than that can cause the root system to become overloaded with water. This will then lead to root rot. Having plenty of drainage holes is essential in avoiding this issue.

Living in the desert means that these individuals have to be able to withstand warm days and chilly nights. Growing one of these floras indoors takes that challenge away entirely.

The best conditions for a potted Century plant tend to be anywhere between 15 and 21 degrees Celsius. In all reality, they can handle a wide range of temperatures.

Anything aside from freezing and you should be just fine!

Agave americana isn’t really all that picky when it comes to humidity. The average range of humidity that you’d find indoors should be more than sufficient for these individuals.

This falls in line with most desert dwellers, as they don’t really have much moisture hanging in the air. One thing to note is that these floras do prefer fresh air, if you can manage it.

Placing them next to an open window can yield great results.

Have you ever seen the flowers on any desert plant? There’s something similar when you compare different species of these types of plants.

This isn’t always the case, but generally, they all share large flowers. Producing such grand blooms takes a lot of energy. If you give your Century plant plenty of sunshine and fresh air, you shouldn’t have a problem.

In case you want to help them out, consider investing in a liquid fertilizer. Only use it during the growing season at two-week intervals. They don’t really need any more food than that!

These plants produce parts that are known as offsets. Also referred to as “pups”, offsets are separate parts of the plant that have developed from the mother plant.

They are essentially clones! You can use these to actually propagate your Century plant, given that most of the work is done for you. Other methods of propagation involve seed germination and leaf cuttings.

We will add instructions for leaf cuttings later on in this article!

Taking the first word involved in its name, you might assume that these individuals reach maturity at 100 years of age. This is actually false!

The Century plant can begin growing flowers anywhere from 8 to 30 years.

Individuals who are allowed to grow without the restrictions of a pot can shoot up beyond 20 feet in height. Indoor specimens tend to be restricted to about 6 feet in height.

Even with an exceptionally slow growth rate, it’s important to repot when they need it. Their root systems are poor, meaning that this should be handled carefully.

Without transferring them to a new container, the roots will become cramped, leading to stunted growth. These plants should be repotted in the spring during periods of growth.

Expect to do this every year for a healthy Century plant.

Be careful and make sure that each pot has drainage holes so that you don’t end up letting your flora sit in water for too long. 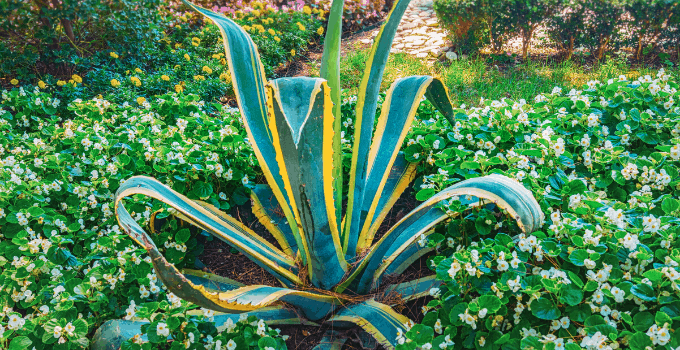 Watering these desert-dwelling individuals is not all that tricky, as long as you don’t give them too much water. Let’s start at the beginning.

Once you have placed your individual into a pot, water it more frequently than you would if it were an adult. This will typically be every three days or so. Adult plants can do just fine with monthly waterings.

The soil itself should be soaked until a depth of about six inches. You can use your finger to make sure that this is the case.

Allowing it to dry out completely before adding more moisture can actually help them for the long run.

You can choose to use the already developed offshoots that a Century plant produces naturally. Or you can take matters into your own hands and propagate through seed germination or stem cuttings.

Multiplying such individuals is relatively easy despite which method you choose. We will explore the steps involved in stem cutting propagation.

You’d think that the life out in the desert would make you extremely tough and resilient. Well, that’s mostly true! But, they do have their pests just like any other plant. There are even a few diseases that can cause them harm. Here are the ones to look out for!

Chances are that you haven’t heard about the snout weevil. This beetle has been known to seriously harm any cactus dwelling plant.

These, along with leaf-footed plant bugs are quite the problematic invaders. Getting rid of them takes true diligence!

Insecticidal soap is one of the only ways that you can actually rid your plant of these pests before serious harm happens.

Root rot is about the only disease that you really need to worry about when it comes to a Century plant. These can be relatively easy to take care of. Begin by carefully taking it out of its pot. You’ll then proceed to rinse off the roots and bury in fresh soil.

Want to see what root rot can look like in other plants? Read our text about root rot causes and symptoms!

Keeping an eye out for problems that may present themselves is a great habit when caring for your Century plant. The following section involves the more common issues and how you can solve them.

Plants such as the Century plant may at times drop their leaves. This is due to an overabundance of sunlight. Sure, we did say that they prefer full light, but that should not be throughout the entire day.

Certain individuals might prefer to be placed in a room that gets plenty of bright, indirect sunlight.

The foliage of a Century plant is meant to be quite rigid. Droopy foliage may signal that it is either getting too much water, or that bugs have invaded.

You’ll first want to check for any pests that have made themselves at home on your plant. If this isn’t the case, alter your watering schedule and allow more time between sessions.

You may be shocked to find your plant whither and die off after the flowers have bloomed. This shouldn’t be a cause for alarm.

It’s normal for Century plants to go into a state of dormancy after flowering. The reason why we chose to list this as an issue is because a lot of people tend to become worried when they see this.

Brown spots indicate the presence of a fungal infection, most likely the Black Dot disease.

Unfortunately, you’ll have to go to more extreme measures to tackle this issue. Using fungicides is the best resource.

5 TAKEAWAYS TO A HEALTHY CENTURY PLANT

Still unsure if you are really qualified to take in such a large, fun plant? Don’t worry! We’ve got you covered! Here are the most important aspects of raising a Century plant.

Why is it called a Century plant?

It apparently gets its name due to the rare bloom. The flowers of a Century plant can take up to 25 years to happen, therefore it had a “once in a century” bloom.

The only Century plants that give off any kind of unpleasant odor are the ones that have rotting tissue. If you smell anything of this sort, carefully examine it for infection.

The sap found in these plants is considered to be poisonous. If ingested or touched, they can cause problems with skin irritation and digestion. 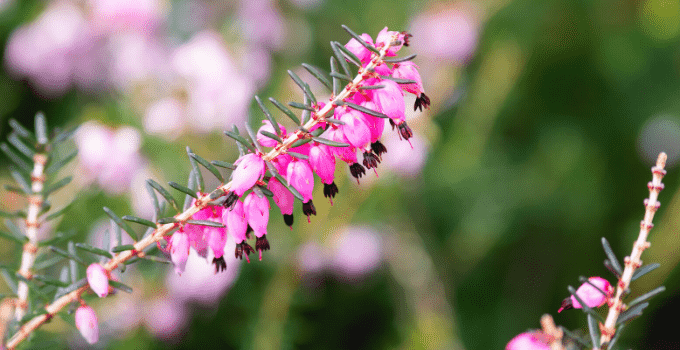 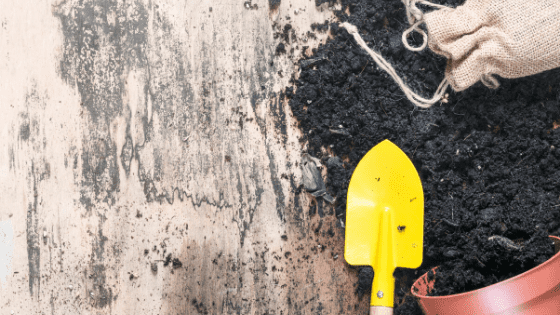 Next
How to Repot a Plant – 4 Steps To Success
Comments are closed.