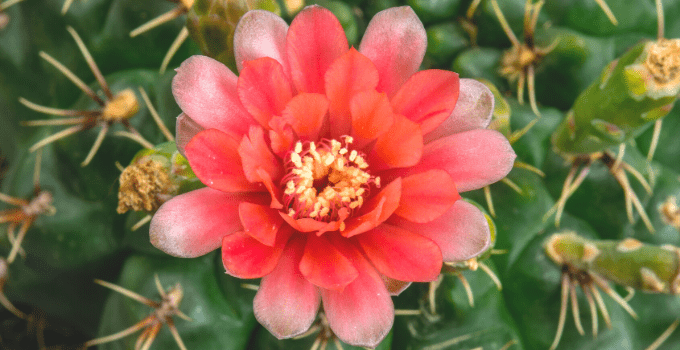 Native to the South American country of Argentina’s Catamarca province, Gymnocalycium baldianum are part of the cacti family. They grow in the green, mountainous region of the country.

They appear more flat than other cacti, however. They are small, spherical in shape and solitary as they hardly have any branches growing out of them.

This cacti species is capable of growing flowers that are pinkish-red or purply in color and funnel-shaped.

Gymnocalycium baldianum would perhaps make one of the more ideal houseplants due to their size, but also subtle nature. They have spines, but they are more on the softer end of the spectrum thus, family-friendly.

They make lovely exotic gems to bring inside to the home with the bright flowers that grow atop them. As you read along, you will notice that Gymnocalycium baldianum don’t make hard plants to tend to.

They are easy-going and will blend comfortably just fine.

From its infancy days to its mature adulthood, this cacti species will blossom into a beautiful green, sturdy plant. Some may even call this species a spider cactus due to how its areoles grow into a spider-like form.

And, if you are lucky enough, you will even see the growth of the funnel-shaped flower. 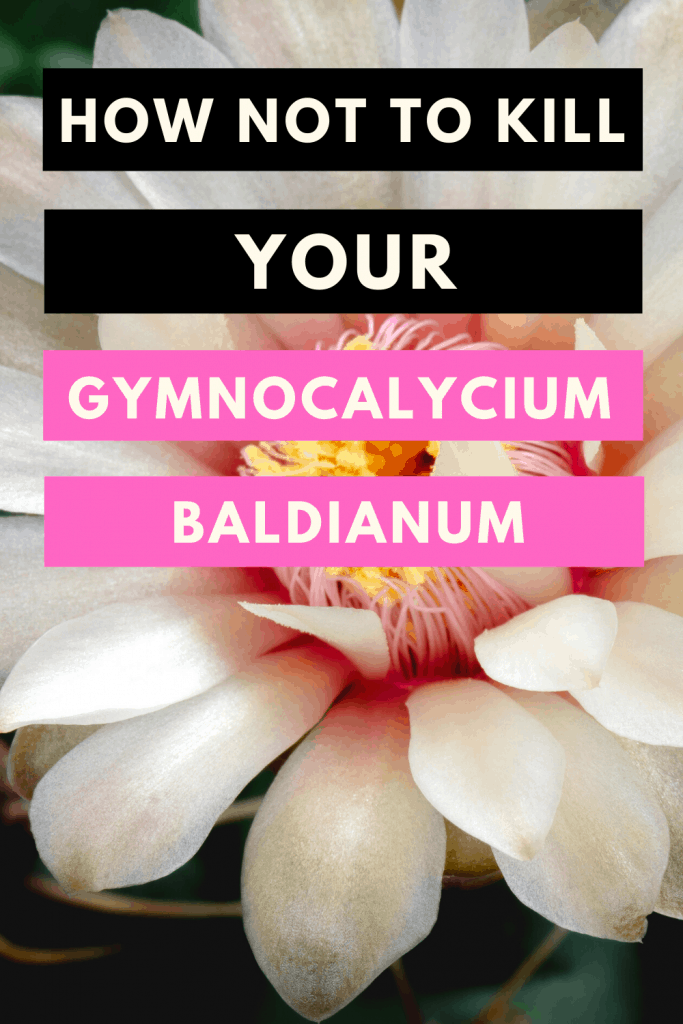 Like most cacti plants, Gymnocalycium baldianum needs soil that will be well-drained. As a cacti species, they don’t do too well when they are left soaked in water, or moist, for prolonged periods of time.

When choosing a soil, go for a normal cactus soil mix. However, because you want the soil to be properly drained, or porous, you can add perlite to the mix. An equal balance would suffice.

If you don’t have perlite on hand, you can opt for a sandy mixture or coarse sand that will do just the trick. If you want more information about types of soil that allows cacti and their succulent friends to prosper, click here for detailed information.

Gymnocalycium baldianum is the type of cactus that appreciates partial shade instead of direct sunlight. Keep in mind that this is a species native to the mountainous, grassy region, not a desert cactus.

When growing this plant indoors, place them in a spot that tends to be the brightest at home. Direct sun exposure isn’t recommended as this cacti enjoys partial shade.

Four to six hours of appropriate lighting is necessary on a daily basis. Also, ensure that where you place this plant inside the house receives a healthy, consistent flow of air ventilation.

When growing this plant outdoors, damage would be done if you place them under direct sunlight.

Gymnocalycium baldianum thrives when they get shade, thus, consider placing them under a sun roof or if you don’t have a roof like this, place them next to taller plants that can act as blocks from the sun’s rays. Excessive heat and sun will prevent this cactus from flowering.

When watering Gymnocalycium baldianum, regular watering in their growing months of summer is needed. More watering is needed during this plant’s younger days. Although, wait for the top inch of the soil to dry completely in between waterings.

As houseplants, Gymnocalycium baldianum would need to be watered roughly every seven to fourteen days in the summer growing season. If you live in extreme heat conditions that may cause for a heatwave, more watering may be needed.

In the winter time, depending on if you live in an area that has a cold season, watering needs become less frequent. Watering this cacti species once a month would be appropriate as you want to keep this plant from drying out completely in such a cold, parched season.

Temperatures can go as low as 14 degrees Fahrenheit (-10 degrees Celsius) and the cactus species can still survive as long as it stays dry as previously mentioned. However, if you live in extreme wintery places, you may need to place your plants in a container or pot to move them indoors if you have them growing outside.

If keeping them outside is a must, then you can consider investing in frost cloths or blankets to protect them.

Just like most cactus plant species, Gymnocalycium baldianum is no different when it comes to levels of humidity. They can’t tolerate moist, humid conditions for long periods of time.

Thus, they thrive when they can be healthily drained and dried in between waterings and in climates that would cater to less humidity.

Because Gymnocalycium baldianum are just like most cacti with thick skin, being able to retain water levels within, too much humidity can rot their roots and stems. Therefore, try to stick to moisture levels of about 30%. This would be the safest choice.

All living species need nutrients to grown and prosper, Gymnocalycium baldianum included. A liquid fertilizer would do great at a quarter to half strength about every two weeks during its growing season.

Ideally, go for a balanced blend of nitrogen, phosphorus and potassium nutrients. Not much fertilizer is needed for cacti plants in general.

Therefore, sometimes when you feed nutrients to them, you may want to dilute the fertilizer first.

For your general knowledge, fertilizers contain nutrients like nitrogen, phosphorus and potassium. When purchasing fertilizers, you may notice a three digit number ‘#-#-#.’

This shows how many pounds of nitrogen, phosphorus and potassium there are in the mix, respectively.

To propagate Gymnocalycium baldianum, you can do so in two ways – either by using seeds to harvest or by using cuttings. If seeds are going to be used, then it is best to propagate during the spring season.

Although, for cacti species, it is usually better to propagate by using stem cuttings or offsets. Both seeds and offsets do require patience and time thus, the ultimate deciding factor could be in which area you live.

Depending on where you live, one method may be better than the other.

Both methods will be discussed further in detail in the propagation section below.

Gymnocalycium baldianum don’t grow to be tall cacti. Rather, they grow more horizontal in width, bulbous, but flat.

That is why sometimes you would hear them being dwarf-sized. Gymnocalycium baldianum can grow up to three to four inches tall, which is equivalent to seven-and-a-half to ten centimeters tall.

Diameter-wise, they can get to three to five inches wide, or eight to thirteen centimeters.

The growing season for this type of cacti species is in the warmer months of spring and summer. The flowers that bloom on them are funnel-shaped and can grow to be about one-and-a-half inches in diameter, or four to six centimeters.

Because Gymnocalycium baldianum aren’t big cacti plants, simple, small pots would suffice. Pots that are porous and can drain water from the soil well are best. Therefore, check that the pots have holes at the bottom.

To go into further detail as to how to propagate Gymnocalycium baldianum, there are two ways as  aforementioned above:

The first way is to use seeds to harvest. Keep in mind that you should use the seed method in the spring time. Take a clean, sterile pot and add in some soil mixture. Put in some fertilizer to help with initiating the roots and stems to grow. Water them as appropriate.

The second way to propagate this cacti species is by using cuttings, or offsets. From the mature plant you have, cut a piece off from the stem. Take care and use gloves to avoid getting cut by the spines.

Place the cut piece on a cloth or paper towel to dry up, this may take a few days to a week depending on your environment. Once dried, you may notice a callous that has formed.

Take this piece and place them in a new pot with soil mixture. Add some water and proceed to care for them as per this guide. Feel free to add some fertilizer, but perhaps at a quarter strength.

Common problems for Gymnocalycium baldianum include the amount of watering it is given, as well as how much lighting.

This cacti species need to be able to live in soil that drains well and kept dried. Most of the time, the soil needs to be completely drained before a new watering.

However, for Gymnocalycium baldianum, as long as the top inch of the soil is dried, then you can give it its next drink.

In terms of lighting, you would want to be cautious about the amount of light you provide this cactus plant. Natural lighting with partial shade as houseplants would be recommended. You want to avoid placing the plant under direct sunlight to avoid harm.

To keep Gymnocalycium baldianum problem-free, monitor them every few days or on a weekly basis to check for soil texture. You will want to observe if the water is being properly drained from the soil by touching the surface level and see if the top inch, at least, is completely dried out.

Another tip to keep Gymnocalycium baldianum problem-free is to stay conscious of changing weather.

In a home environment, you can keep temperature levels to living standards for yourself so long as humidity levels remain low and the plant is guaranteed a sufficient dose of light.

Inside, you just need to ensure the plant is placed in the brightest spot possible as night comes around, and the plant will be healthily shaded.

If placed outdoors, make sure you place the plant in shaded conditions rather than under the scorching sun.

What do I do if I over-watered my Gymnocalycium baldianum?

If you have over-watered your Gymnocalycium baldianum, fear not! You can let them sit without watering for a few days until the soil has dried out. If conditions are too harsh and the water won’t evaporate out of the pot, then you would want to repot it. Just take a clean pot, add in new soil mixture and a little amount of fertilizer before placing in the cactus.

Do I need to prune Gymnocalycium baldianum?

Gymnocalycium baldianum rarely needs to be pruned, if at all. They can thrive on basic necessities and care as you will notice throughout this article. The flowers that grow on top of the cactus may need to be closely monitored in case wilting happens. Overall though, this cacti species will fare quite well on its own.

How do you repot Gymnocalycium baldianum?

To repot Gymnocalycium baldianum, place them in a pot of new, fresh soil mixture. You don’t need to water the repotted plant right away, rather, let them settle in first in the dry soil mixture in order for the roots to recover and adapt. This would be from a few days to a week before you can proceed to water as necessary.

Why do people also say that Gymnocalycium baldianum are spider cactus or dwarf chin cactus?

Gymnocalycium baldianum are called spider cactus or dwarf chin cactus mainly due to the appearance of how they grow. Their spines that grow on their areoles come out curved, resembling spider legs.

In addition, they grow to be more flat on the stem compared to their cactus friends thus, they are like dwarves and flat on the chin.

Cacti plants make wonderful houseplants to give your humble abode a unique touch of Mother Nature at its finest. Gymnocalycium baldianum is no exception to this fact. These cacti species are not only easy to care for, but they also give much character and charisma to the entire ambience. Who can say no to these dainty pots of joy! 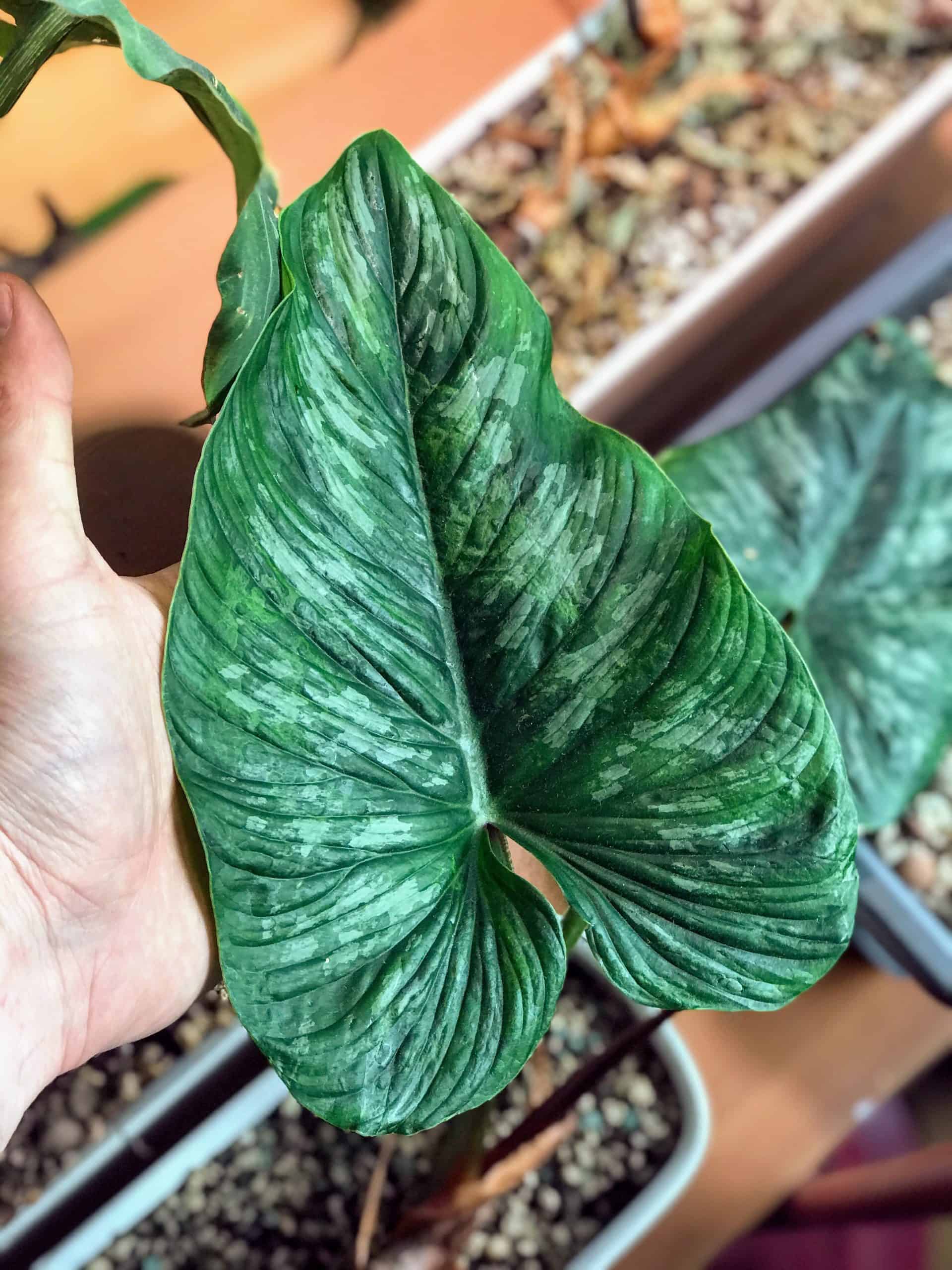 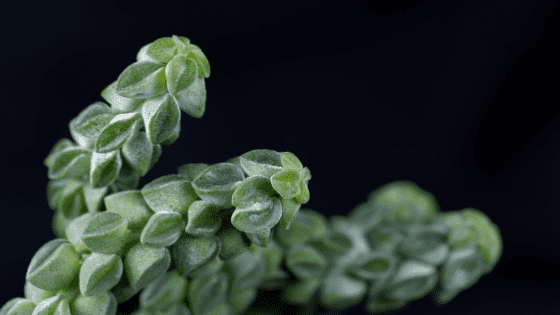 Next
Radiator Plant Care - Things you should know
Comments are closed.