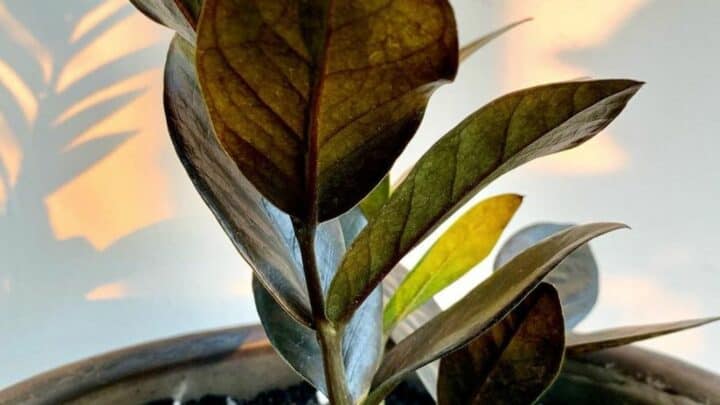 The black Raven ZZ first appeared in a South Korean nursery in 2006. Hyuk Jin Lee, a nursery owner, and ZZ plant grower noticed when one of his plants sent out a single dark-colored branch.

This mutation appeared naturally and when propagated, the same characteristics carried over to new generations. After a lengthy plant patent process in the United States, the cultivar ‘Dowon’ became the latest ZZ available for distribution under the common name Raven.

The new Raven variety is a prized variety amongst interior designers and rare houseplant lovers. It features intense purplish-green, nearly black foliage that makes a bold statement and stands out amongst other plants. Although it is now available in most big garden centers, you’ll want to read up on proper care to avoid having to replace this special cultivar.

Zamioculcas zamiifolia, lovingly referred to as ZZ plants, are one of the best houseplants for beginning gardeners. They are virtually indestructible and will withstand inconsistent watering, low light conditions, and most soils. Plus, they are practically immune to pests and diseases.

These resilient qualities along with their dark, waxy foliage make ZZ plants a favorite amongst beginners and veteran houseplant lovers. New on the market, is a remarkable variety of ZZ plant called Raven featuring dark purplish-green foliage when the plant matures.

If you already have a ZZ plant, you’ll have a good idea of how to take care of your plant. But follow along to get the insight on the Raven specifics.

ZZ plants don’t need any special potting mix so long as it’s well-draining. If you already have some soil at home, simply add a few handfuls of perlite or vermiculite. Or if you want to purchase a ready mix, check to make sure there’s already some perlite in there.

It’s also important to make sure your pot has drainage holes on the bottom. Without drainage holes, it won’t matter how well you prepared the soil!

Water your ZZ once the soil has completely dried out. The Raven ZZ (like all ZZ’s) grows from potato-like roots that hide beneath the soil and store water. These water reserves make the plant resistant to drought and forgetful owners but also makes it susceptible to overwatering.

Overwatering can lead to root rot, so you’ll want to water your ZZ well when the soil has fully dried out. As a rule of thumb, you’ll water every two weeks in the summer and once a month in the winter.

ZZ plants are famous for surviving in low light conditions. They are one of the few houseplants you can keep in a windowless bathroom or stairway. Although they will survive in low light, they prefer bright indirect light.

Keep your Raven ZZ well above 50°F or 10°C and away from air conditioners and heaters. Homes normally range between 68 to 76°F so houseplant ZZ’s shouldn’t require any special attention with regards to temperature.

If you live in a temperate climate with mild winters, you might be able to keep your Raven ZZ outside in a shady spot. Be aware that ZZ plants cannot survive temperatures lower than 40°F or 5°C.  If left outside, make sure to keep an eye out for cold fronts as your precious ZZ will not survive anything colder.

Humidity is one of the factors we’re least aware of concerning our houseplants. While I know exactly what temperature it is inside and how often I’ve watered my plants, I could not tell you what the humidity level is.

Luckily for me and others like me, ZZ plants don’t have any humidity requirements. Whatever the humidity in your home is, they are happy. No extra homework is necessary.

To encourage growth, feed your Raven once every two or three months with a well-balanced fertilizer. Look for a liquid fertilizer that has an NPK ratio of 1:1:1 or 20:20:20 (it means the same thing). To fertilize, dilute the indicated amount of fertilizer in water to feed your Raven.

ZZ plants don’t require fertilizer, so don’t feel like a bad houseplant parent if you skip this step. You might have slower growth, but your hardy ZZ will definitely survive.

During the growing season and in perfect conditions, ZZ plants can grow up to 1 cm per day! This speedy growth is normally followed by a long dormancy period. Every two to three years repot your ZZ to give new room for it to grow.

At home, my ZZ plant will shoot out a ton of new growth in the summer after being repotted. As the year goes on no new shoots erupt, but the stems grow and fill out.  Keep repotting to avoid their roots getting too dense (making it very difficult to repot in the future). However, if you don’t want your plant getting any bigger just stop repotting.

If your plant is getting a bit too large for your liking or you want a backup, you can split the plant. However, don’t forget it is illegal to reproduce your Raven ZZ for resale.

Your black Raven ZZ is sure to wow anyone who sees it, but that doesn’t mean you want it to take over the whole room. The long dramatic branches can sometimes get a bit too long overshadowing other plants or getting in the way.

To control these unruly branches, simply cut them at the base. When pruning unwanted branches, be careful to not touch the sap! It can be irritating to sensitive skin.

The Raven is a new variety of ZZ that is not so easy to find. You’ll want to get a good grasp on propagating to make sure you have reserves. Please be aware that due to plant patent laws, the Raven ZZ variety is illegal to reproduce for resale.

Luckily for you, ZZ plants are considered one of the easiest houseplants to propagate! To grow a backup plant for personal use, use the same propagation techniques as you would for other ZZ plants. These include leaf cuttings, stem cuttings, and crown division.

The easiest and most reliable is to divide the root tubers in half while repotting. This method preserves the existing root systems, allows the plant to recover quickly, and encourages new growth.

If dividing the root ball is too intimidating, or you simply don’t want to remove the plant from its pot (for example, if it’s truly stuck), you can propagate by cuttings. To do this put a piece of stem or leaf in water and wait for roots to appear. Dividing through cuttings is easier at the beginning, but has a lower success rate and requires more maintenance for success.

ZZ plants are considered to be flowering plants and will send out blooms in late-summer and autumn. Their flowers are so small, they are barely visible and the plant is grown exclusively for its foliage.

The ZZ family is widely recognized as one of the easiest houseplants to take care of. Their resistance to drought and their high tolerance for temperature, humidity, light, and soil make them excellent beginner houseplants.

In the rare occasion that your Raven ZZ shows signs of stress, it is most likely caused by root rot. An easily corrected symptom of overwatering.

Any pests on your Raven ZZ will quickly leave as soon as any other vegetation is available. The thick, waxy leaves don’t make an enticing meal for pests.

Root rot is the most common problem with ZZ plants, caused by overwatering. When the soil isn’t able to dry between waterings and the tuber-like roots are sitting in wet conditions they can develop root rot.

The plant will show signs of root rot through yellow, mushy leaves. When you see this symptom stop watering for about 6 weeks to let the soil and roots dry out again.

Before watering again, make sure that your pot has working drainage holes, that you’ve chosen a well-draining soil mixture, and that you’ve refreshed your knowledge on the proper watering protocol.

If it’s not addressed, root rot will prove fatal for your precious Raven ZZ.

ZZ plants are a tough species that are virtually unbothered by pests. Insects will avoid this tough plant and will settle for literally any other greenery. If you get any scale insects on your plant (such as mealybugs), simply wipe them off with a paper towel dipped in alcohol or a neem oil and dish detergent solutions. 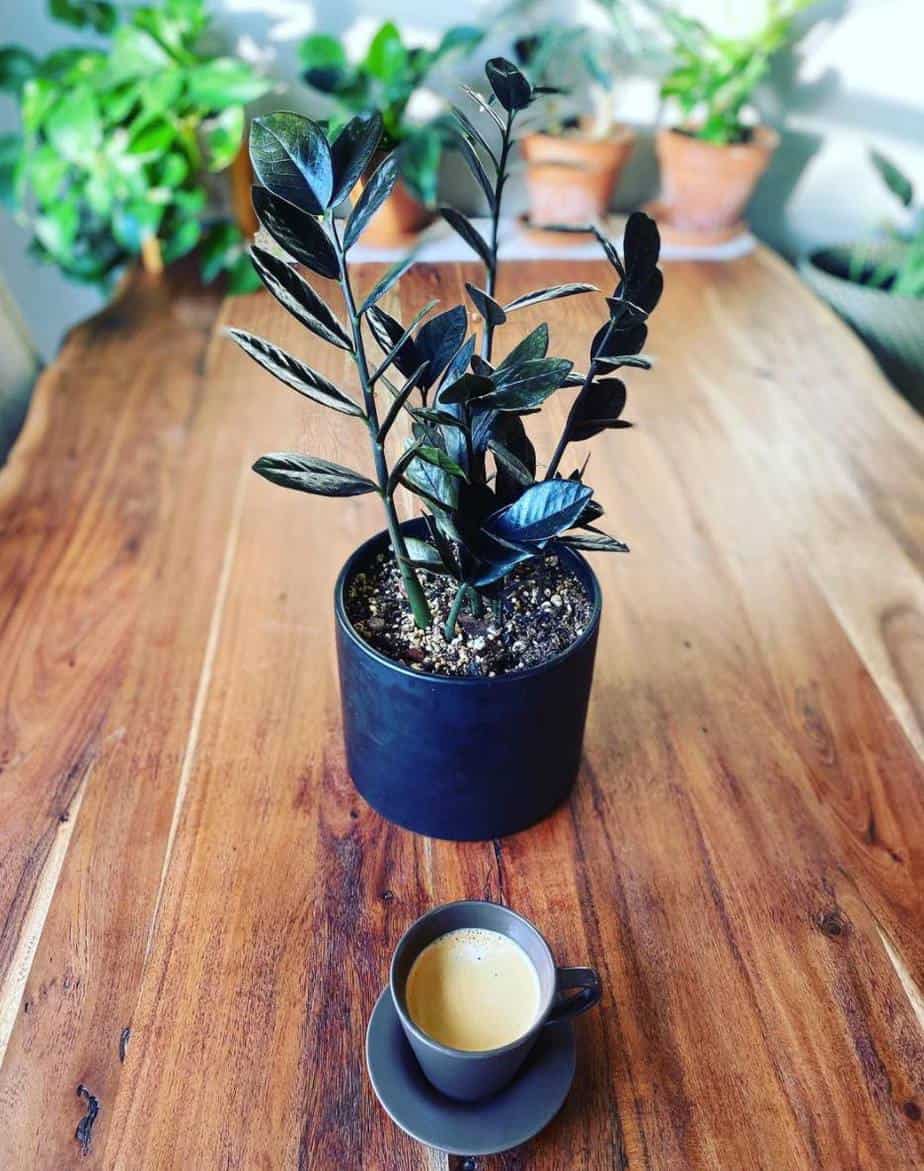 What about a beautiful Raven ZZ as a tabletop plant for your dining table? Photo Credit goes to @cabecadeplanta on Instagram!

Raven ZZ plants share the same low maintenance needs as more common ZZ varieties. They can survive low light, inconsistent watering, and lack of fertilizer. For your Raven to grow and thrive, follow these basic guidelines:

Am I allowed to breed the Raven ZZ plant?

The cultivar ‘Dowon’ (sold under the name Raven) is protected under plant patent number PP30035 for the next fifteen years. This means it is illegal to reproduce the plant or sell it without authorization from one of two certified growers – Costa Farms and Van Winden-Erica B.V.

You can, however, propagate a personal backup by following our propagation tips above. This is a great way to prevent having to buy a new Raven ZZ in the unlikely case something happens.

Where can I buy a ZZ Raven plant?

You can buy a Raven ZZ plant from most large garden centers. In Europe, the Raven ZZ is exclusively distributed by the grower, Van Winden-Erica B.V. and in the United States, the only authorized grower is Costa Farms.

From Amazon to boutique plant shops, all houseplant suppliers carrying the Raven ZZ must be authorized by these two growers.

Why does the Raven ZZ plant change color?

As it matures, the Raven ZZ will transform its new bright green leaves into a dramatic purplish, almost black color. Six weeks from the start of new growth you’ll have a noticeable color change but wait a full two months for the final color.

Experiments to test the influence of light on this color change show that the impact is negligible. Unlike with most colorful varieties whose hues are influenced by the sun, only time will make the colors change.

Is the ZZ Raven plant poisonous?

The Raven ZZ has non-lethal but very irritating calcium oxalate crystals throughout the plant. The sap can be irritating to sensitive skin and ingesting any part of the plant can be extremely painful.

Sometimes, a curious pet might take a nibble of the plant but will most likely spit it out before swallowing too much.

The Raven ZZ is the newest cultivar of Zamioculcas zamiifolia. Starting as a genetic mutation in a South Korean nursery, the Raven ZZ is now a highly sought-after houseplant. Only two growers in the world are authorized to reproduce the Raven, making it one of the more uncommon varieties.

Particularly in modern interiors, the dramatic nearly-black foliage makes a stunning statement and will pop amongst other houseplants. For those looking for a rare houseplant that is still easy to care for, the black Raven ZZ plant is your best choice. 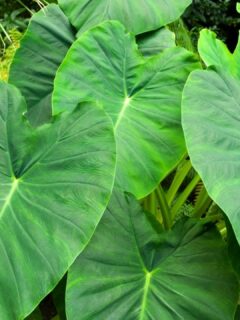 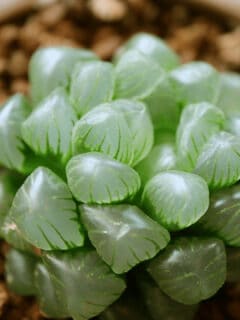 Next
Haworthia Cooperi - A Complete Care Guide
Comments are closed.