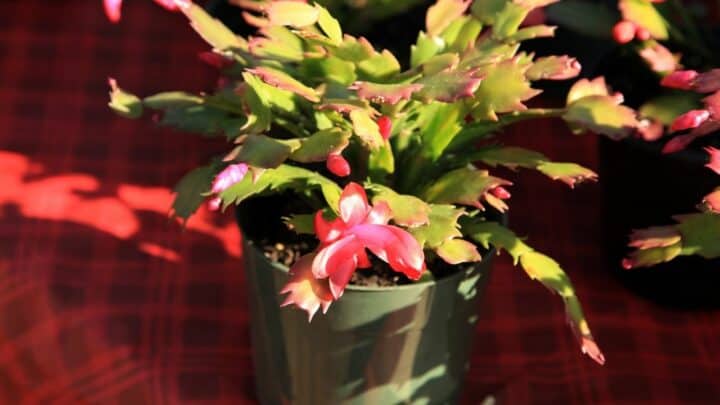 The Christmas cactus is one of the top 10 cutest cacti plants for gorgeous blooms in winter, indoors.

That is unless it comes down with a sinister dose of stem rot.

When that happens, the plant wilts, loses its vibrant green colors, stops flowering and eventually dies.

It’s a horrible Christmas gift, but it can be rescued.

Catch it early enough, take preventative and protective measures, and your holiday cactus can survive the neglect, bounce back and bloom for many more seasons.

Overwatering a Christmas cactus causes root rot that progresses to stem rot. Symptoms are brown lesions on stems, wilting, flowering stops, and growth is stunted. The plant gives off a fetid odor. The fix is trimming off rotted roots and stems, and repotting in a fresh, well-draining potting mix.

The giveaway symptom (apart from browning) is a foul odor being omitted from the plant. It smells like decay.

A musty odor reminiscent of sweaty socks left in a gym bag, found days later. If you have a kid who’s in a sports team, the smell’s likely familiar.

That stench is the decay emitting from the soil. Beneath the surface, the roots will be rotting.

On closer visual inspection, the damage is evident. It might look innocent, and even natural. Like, aerial roots shooting out of the plant’s leaves. It’s common for some plants, right?

Tiny thin hair-like structures emerging from the leaves of Christmas cacti are aerial roots. It’s a ‘survival mechanism’ of the Christmas cactus.

Emphasis is on the word ‘survival’ because any time a plant needs to go into survival mode, there’s a serious problem causing it.

When the roots can’t deliver the nutrients to the plant’s leaves, it’ll start putting out aerial roots to soak up nutrients from the air.

What it can’t get from the roots, it’ll try to extract it from the air. Clever things these plants.

A couple of aerial roots are fine, but an abundance of them ruins the aesthetics.

Rather than pinching them off, like you’d do if you didn’t know any better, see it as a warning sign that something’s amiss with the rooting system.

Either the potting soil is overly saturated, the plants become potbound, in which case there won’t be enough air circulation for the roots to breathe, and if that’s left to continue for too long, they’ll turn to mush and rot.

Then, you’ll see stem rot on your Christmas cactus, by which time, the plants in need in surgery.

Surgical intervention is the fix. Swap the scalpel for a sterile pair of scissors.

Gently lift the plant out its pot, rinse the roots under running water to clean away the soil.

Stem rot shows as brown lesions on the stems just above the soil line.

Where you see stem rot on the plant, trace it back to its root and you’ll see it’s rotted.

With the roots exposed, you’ll be able to see which are healthy and get rid of the damaged roots.

Any dark-colored roots should be cut away. If you aren’t sure if a root or two can recover, gently squeeze the root between your thumb and forefinger. If it squishes, it’s too far gone. If it’s firm, it can survive.

Some roots can be partially rotted, in which case, cut away the discolored mushy parts up the point the remaining root is white and feels firm.

Rotting roots that aren’t removed, will eventually spread and lead to stem rot.

How to repot a dying Christmas cactus

The key is to replant in a very lightly moist soil mix. Repotting a Christmas cactus stresses the plant at any time, more so when it’s under extreme duress.

To make it easier on the plant, make it easy for healthy roots to breathe.

Under normal conditions, you’d moisten the soil mix so that it retains a good amount of moisture.

Given that stem rot is because there’s already too much water, go easy on the moisture content to give it a chance to dry out.

Repot in a bigger container. Go up at least one inch to two inches to give the roots room to grow in to its new container.

And, make sure there’s at least one drainage hole. That might be why stem rot got a grip in the first place.

Use a cacti or succulent potting mix or if you prefer to make your own potting soil, make sure it’s well-draining.

Soil, compost, milled peat, leafmould, and perlite are the primary ingredients to use to make a DIY potting soil for Christmas cacti. Not all of them, but a balanced mix of two or more.

Once you’ve repotted your plant, be very vigilant with watering.

It’s the #1 rule for the essential Christmas cactus care. Water in spring and summer when the top few inches of soil is dry to the touch, then much less when the temperatures drop around fall.

The best prevention against stem rot in the Christmas cactus plant is vigilance. Not just for the soil moisture content, but the signs the plant shows.

Overwatering the Christmas cactus causes wilting first. That’s an early sign that your plant is at risk of rot.

One of the golden rules to prevent Christmas cactus wilting is to water only when the soil is moist, and that only applies when it’s in bloom.

When it’s not flowering, let the top few inches of topsoil become dry to the touch, then water it.

Wilting is a sign that a Christmas cactus is sitting in soggy soil. If you keep on adding water, the roots will rot.

Asides from wilting, another early sign of overwatering on a Christmas cactus is white spots on cacti plants, which are often caused by fungus gnats and similar plant pests that seek out moist soil.

If you’re noticing more pests than you’d typically have to deal with, chances are, it’s the soil that’s holding too much water that’s attracting pesky pests.

Can Christmas cactus plants that are damaged by stem rot be propagated?

If you catch the stem rot before leaf discoloration happens, they can be propagated. For best results, twist off leaves with up to six leaf segments, lay them flat some place dark for a day to two to let the wound heal over. Then root in water by only letting the base of the cuttings rest in water.

Do uninfected stems attached to damaged roots need cut off?

Best practice is to prune roots and stems in equal proportions. As an example, if you cut a root in half, also cut back the stem by half, even if it doesn’t show signs of stem rot. The reason being, with less root mass, there’s less nourishment to support all the leaves. 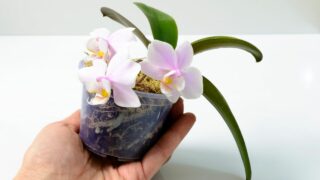 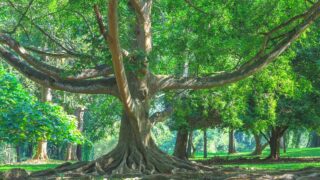