Why Is My Zucchini Plant Wilting? The Answer 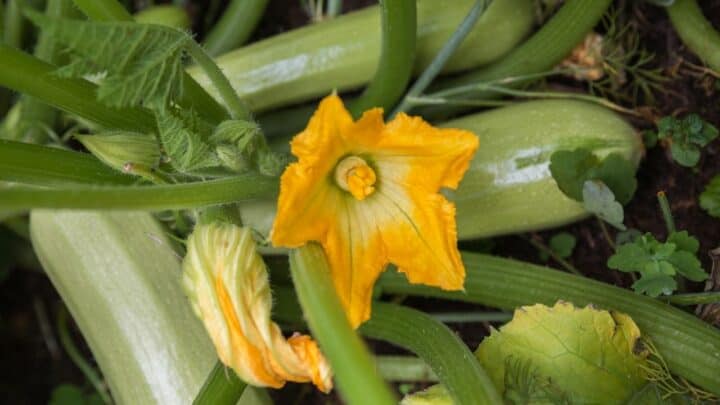 The zucchini, also known as the “summer squash”, is a popular season crop that is enjoyed across the globe.

So much so that April 25th is annual Zucchini Bread Day!

They are an extremely easy crop to grow and are a very versatile vegetable that is a staple in many cultures.

But, what if your beloved zucchini plant is wilting?

In this article, I’m going to help you diagnose what is wrong with your plant, and how to fix it, so read on to find out more!

Why is my Zucchini plant wilting?

Your zucchini plant could be wilting due to being over or under-watered, or it could be suffering from powdery mildew disease or an infestation of vine borers. To fix a wilted zucchini, you should treat it using a fungicide or pesticide, or by adjusting your watering schedule.

A vine borer infestation is one of the biggest zucchini problems.

They are small bugs that fly very fast, often meaning that they go unnoticed by gardeners until their damage has progressed.

Vine borers lay their larvae inside the stems of zucchini plants, which they then feed off of.

Early symptoms of a vine borer infestation include wilting leaves, which is usually a sign that the larvae are already growing inside your plant.

Catching the pest as early as possible will mean that your plant has a higher chance of survival.

I would suggest regularly checking for signs of eggs on the undersides of the leaves or any presence of bugs.

The eggs are typically a dark brown color and can be spotted on both the leaves and the stems.

A simple pesticide works very well to get rid of the eggs as well as the bugs themselves.

Apply this all over the leaves every week, and within a month there should no longer be any signs of eggs or their offspring.

Powdery mildew is a known fungus attacking a variety of crops.

Early symptoms of powdery mildew are white spots appearing on the leaves, which will look almost like a powder had been dropped onto them.

As the disease progresses, the leaves will be entirely covered in white spores of mold and will look both wilted and lifeless.

Powdery mildew is caused by fungus spores spreading to the leaves through contact with water.

To avoid the leaves becoming wet, I would suggest that you water your plant from as far to the base as possible, and try and dry off any wet leaves after heavy rainfall.

I would suggest pruning any leaves affected by the disease as soon as possible, to prevent the disease from spreading to the rest of your plant.

I would especially advise doing this if only a few leaves have been infected, as it is possible this could stop the disease in its tracks entirely.

There are many solutions on the market to treat powdery mildew that are inexpensive and easily accessible.

However, I personally like to steer clear of using chemical fungicides on crops unless it is as a last resort.

I create a natural fungicide using a mix of water and apple cider vinegar in treating powdery mildew.

Use a ratio of 4 cups of water to half a tablespoon of vinegar and spray the leaves thoroughly.

Repeat this every week or after heavy rainfall, and you should start to see signs of recovery in around a fortnight.

Overwatering can lead to root rot. This is where the soil and roots have become too saturated for too long, which was led to fungus entering the soil and attacking the roots.

The leaves of your zucchini will then begin to wilt, as the roots are no longer able to take in the nutrients for your plant to thrive.

Zucchini plants suffering from chronic overwatering will also start to have the foliage change color, usually to a light yellow or brown, starting from the tips of the leaves.

When it comes to a zucchini plant suffering from overwatering or root rot, the only thing you can really do is wait for the soil to dry out.

If your zucchini is planted in a pot that isn’t too large, you could attempt to transplant it into new and dry soil.

However, I won’t strongly suggest performing this step unless the symptoms are very extreme.

If you are not giving your zucchini plant enough water, it will also start to wilt.

If your zucchini isn’t getting enough water, you may notice that the leaves will become desaturated, and drier than usual.

In extreme cases, there may be no signs of growth at all, and the stems of your plant may also become dry and discolored.

To revive a wilting zucchini plant that has been affected by underwatering, you should immediately change your watering schedule to more frequently.

A zucchini plant should be watered at least once a week, but more if you live in a dry or warm environment.

They need 1-2 inches of water each time and should be watered deeply due to their rather large root system.

If you are finding it difficult to know when your zucchini needs to be watered, I would suggest digging a few inches into the soil, close to but away from the roots.

If the soil is beneath is dry, then that is a sign that your zucchini needs to be watered.

Frequently Asked Questions Related to Why is my Zucchini Plant Wilting

Why does my zucchini plant wilt in the sun?

If your zucchini is wilting when in direct sunlight, it simply means it needs to be watered more often. When the weather is particularly hot, it can result in the moisture in the soil evaporating much too quickly, meaning that the water isn’t getting to your zucchini.

Is it safe to eat crops from a wilted zucchini plant?

If there is no damage present or inside the plant, then the crops should be safe to eat. Do not consume any zucchinis that have mold or any kind of disfiguration on them. 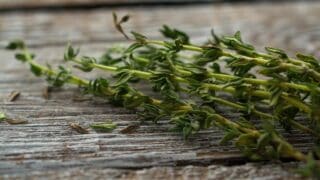 Previous
Why Is My Thyme Dying? The Solution! 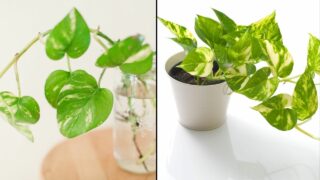 Next
Do Plants Grow better in Water or in Soil? — The Answer