My sister once gifted me with two tropical plants and included some instructions on how to care for them.

I was over the moon with these two beautiful plants that had heart-shaped green leaves.

I made sure to take care of my tropical plants according to the care instructions I was left with, and my plants flourished.

Soon, I began to notice that they weren’t the same plant, after all.

There were differences, even though at a quick glance, they look to be one and the same.

I took my plants to the local nursery to get them identified and to know which is which. I learned that I had a pothos and a philodendron, and here’s how to tell them apart:

A philodendron has a more proper heart-shaped leaf that’s thin and smooth, a thin and brown or lighter-colored petiole than the leaves, and lots of aerial roots. A pothos has leaves that are thicker, straighter along the top of the heart, and waxy, grooved, and the same color as the foliage petiole, and 1 aerial root per node.

The Main Differences Between Pothos and Philodendron 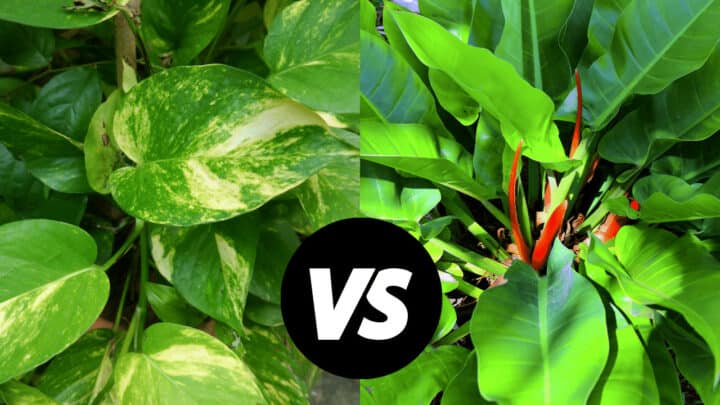 There are a few cultivars among pothos and philodendrons; however, you can still use the list below to tell the difference between the two plants.

Here are the ways to tell the differences between a philodendron and pothos:

One similarity between pothos (also called devil’s ivy, silver vine, or money plant) and the vining philodendron (or heartleaf philodendron or sweetheart plant) is that they belong to the same plant family: Araceae.

The next difference between pothos vs philodendron is the leaves. While both have heart-shaped leaves, and this is why these plants are easily confused or grouped under the same name, there are differences.

The plant leaves of pothos are also heart-shaped; however, the leaves are waxier in texture, giving them a glossy glow. The leaves are thicker too. 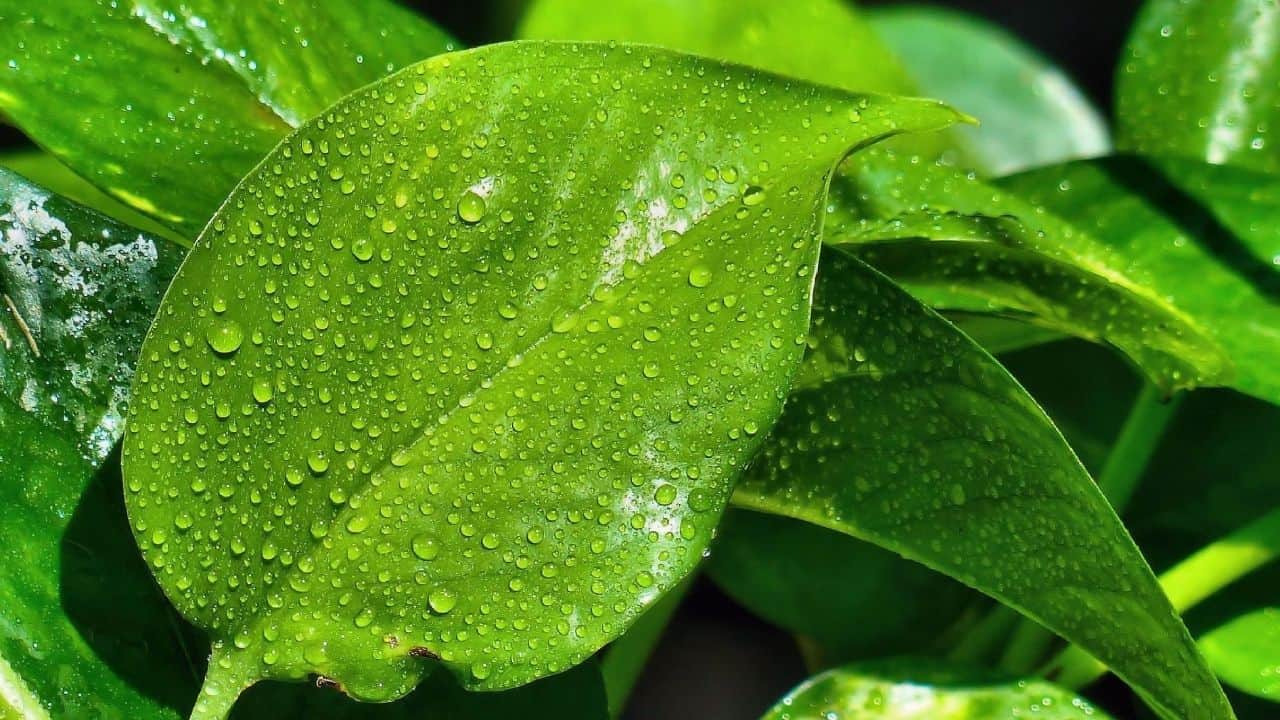 There is a well-defined vein or ridge that runs down the center of the plant.

A philodendron’s heartleaf has a soft, smooth texture and they are thinner. The leaf of a philodendron also has a longer tip, while those of pothos are less pointed and shorter. 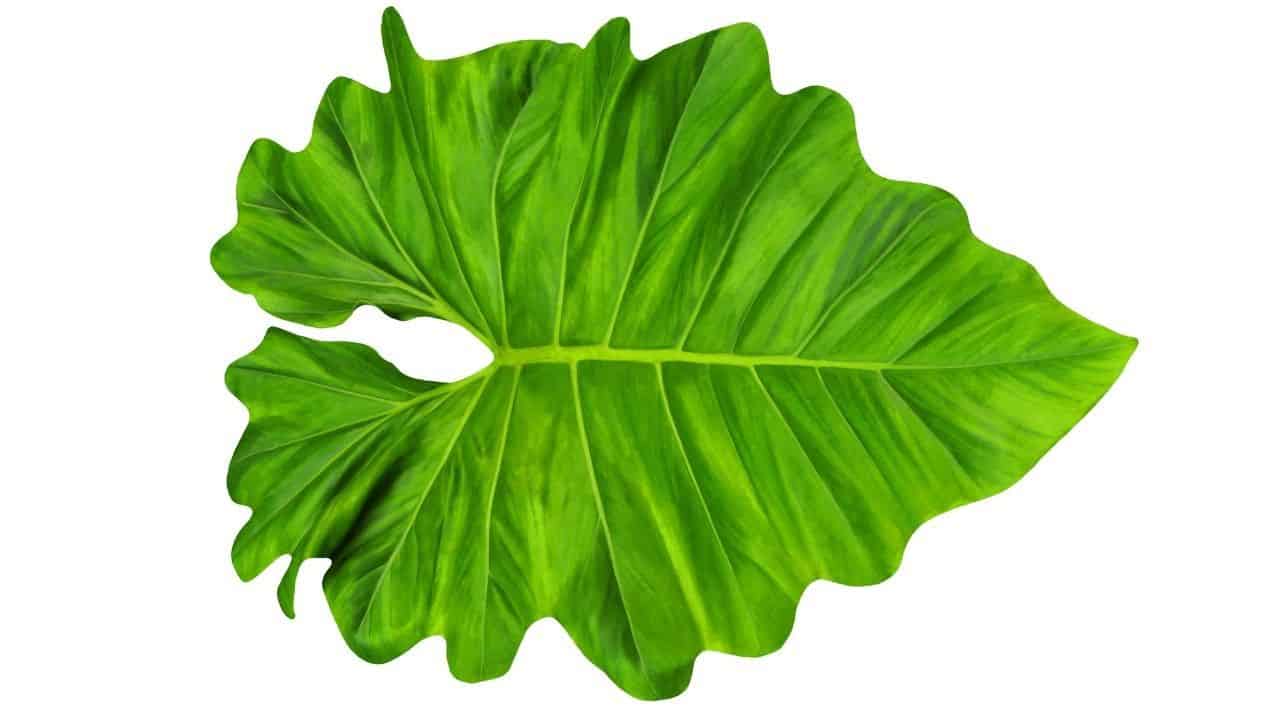 With regard to the petioles, look at where the base leaf connects to the petiole (the stem or leaf stalk). The base of the petiole of a pothos is quite straight so the top of the heartleaf isn’t as defined. 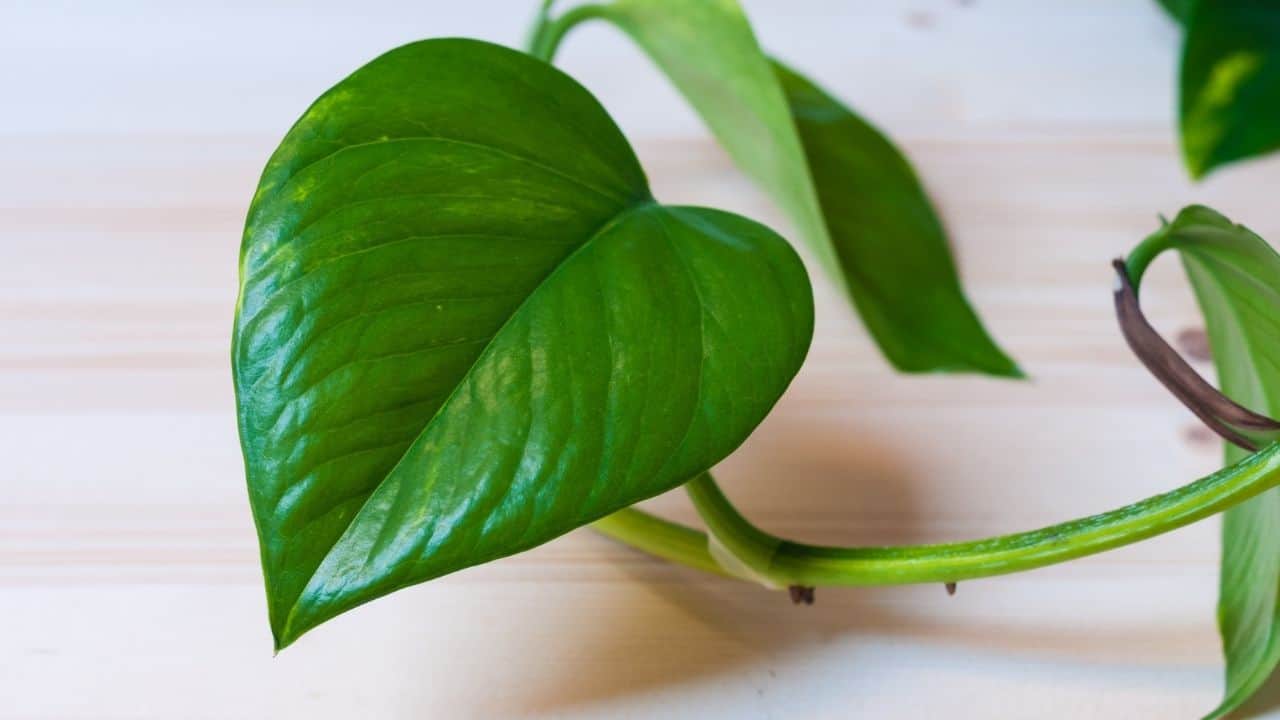 Also, the petioles of pothos have a grooved ridge that runs along the leaf stem, and the color is the same or just a bit lighter than that of the foliage.

The petiole of a philodendron curves inward, forming a more proper heart with the curves of the top of a heart shaping inward. 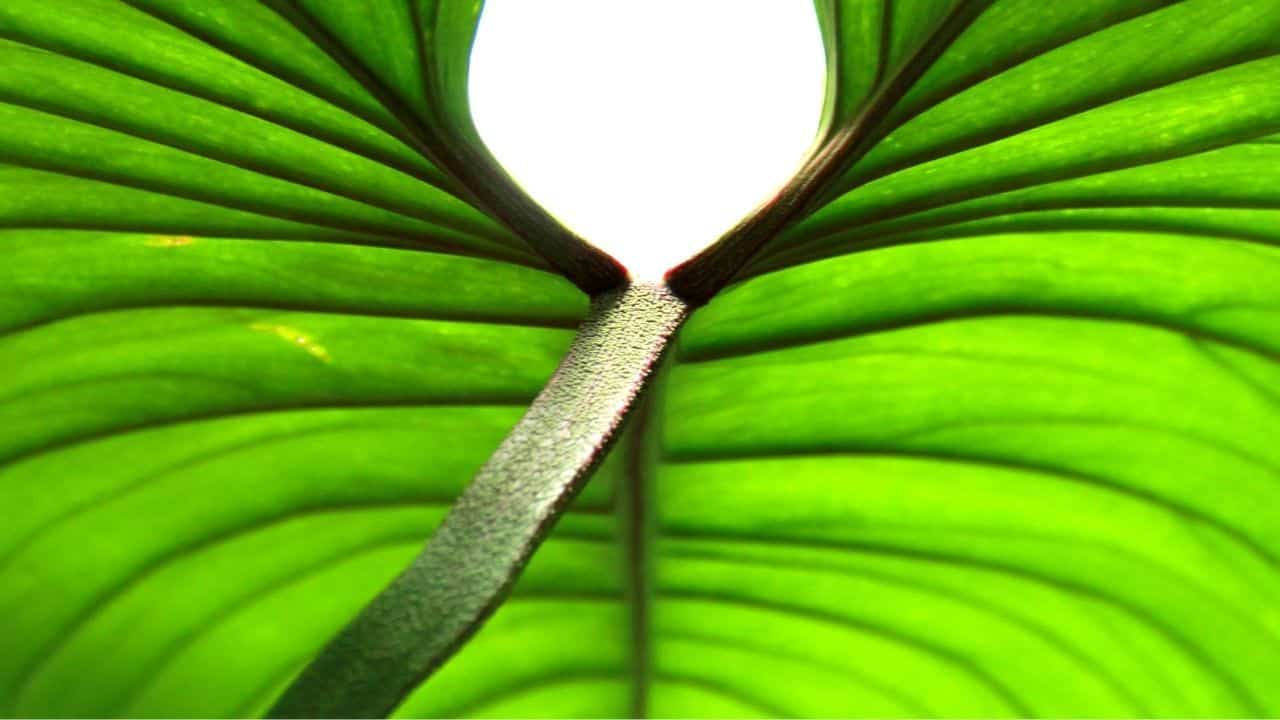 A philodendron’s petiole is smooth and usually a brownish color or lighter than the color of the leaves.

The petioles of a philodendron are thinner unlike that of the pothos’.

You can also tell the difference between these two plants by looking at their aerial roots. Both pothos and philodendrons are mostly vining plants.

Aerial roots are quite aggressive because they help pothos and philodendrons to climb and vine around tree branches. These also anchor the plant for support.

Per node, pothos only has one aerial root. 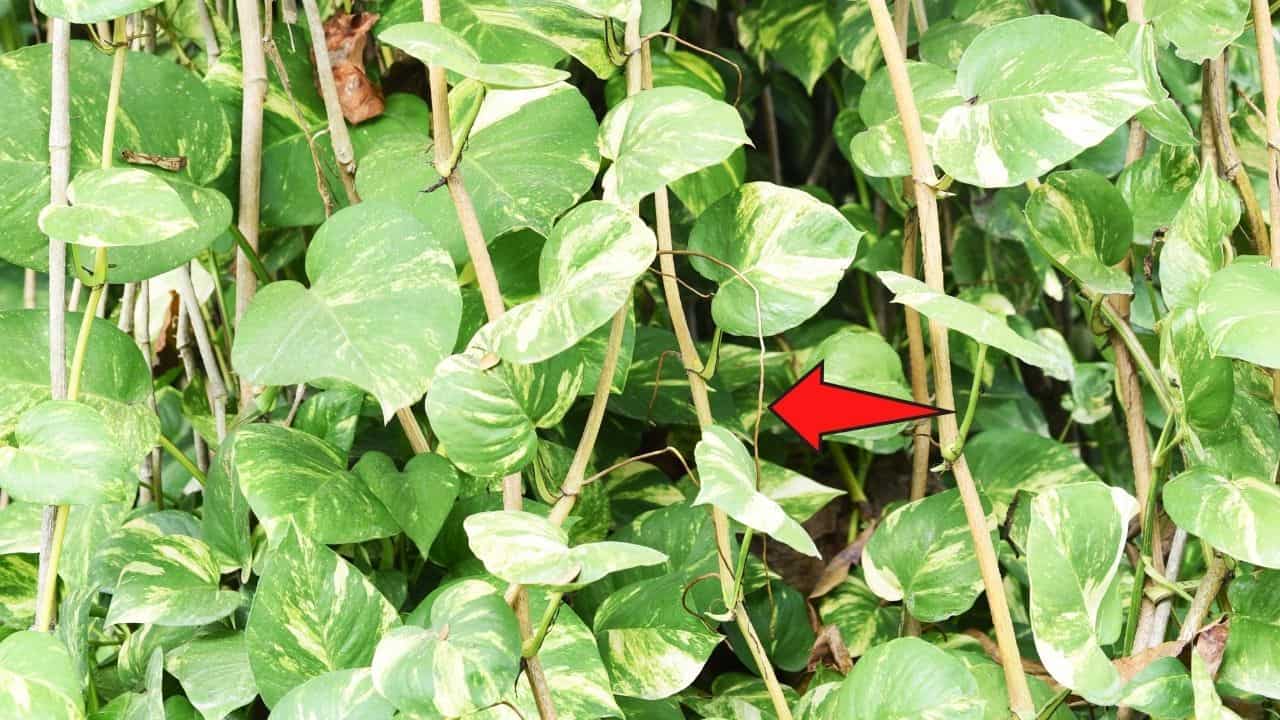 In comparison, a philodendron has a few thinner and smaller aerial roots per node. These look quite wild and like a root system. 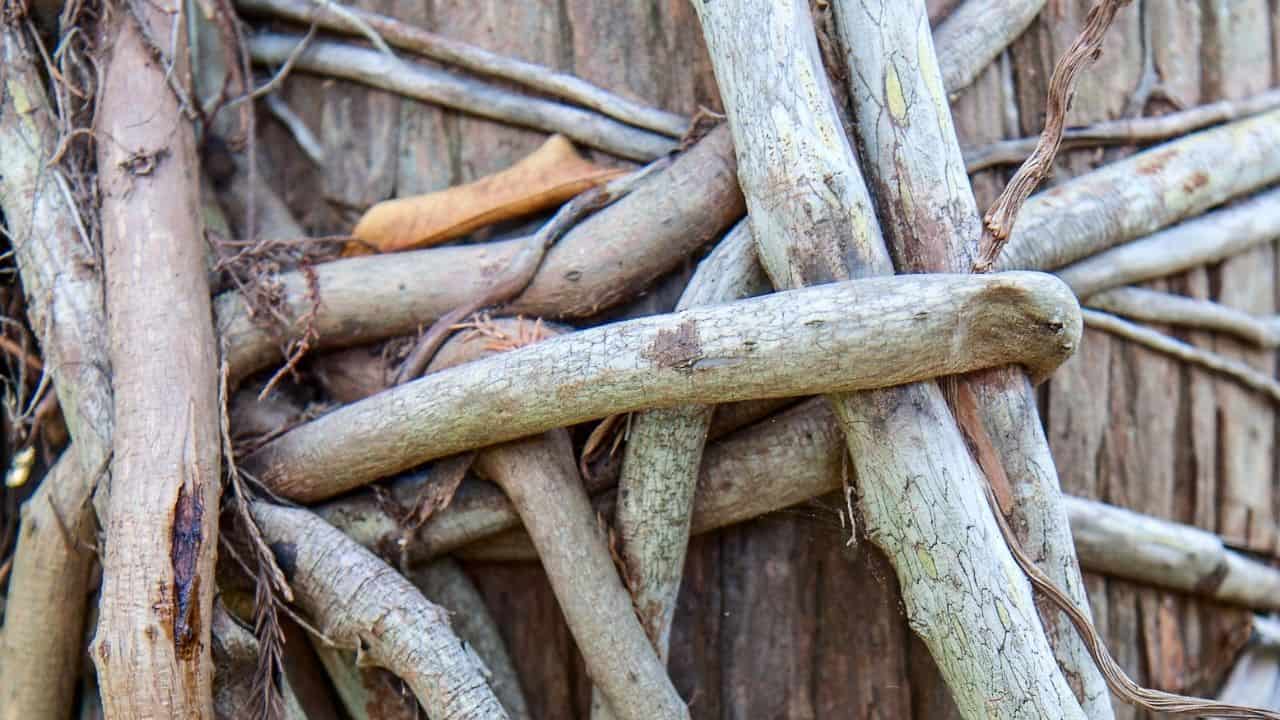 Growth and Forming of New Leaves

How philodendron and pothos grow is another way to tell them apart. I generally look at the cataphylls.

These are small leaves, like a sheath, that cover and protect emerging leaves as they grow. With time, these small leaves dry up and fall off, especially after the new leaf has grown.

If you see cataphylls, then you know the plant is a philodendron. Pothos do not form new leaves this way.

Instead, new leaves simply grow from another, older leaf.

Another area of difference is the color of the leaves. The new leaves forming on a philodendron are often a different color when compared to the other, established leaves.

Emerging foliage has a pink or brown tint, but the color depends on what variety of philodendron you have. Some mother plants have olive leaves and the new leaves are hues of orange or red.

With pothos, new leaves are generally the same color as the fully grown leaves, but they may also be a few shades lighter.

As low-maintenance houseplants, the care for pothos and philodendron are quite similar; however, there are small differences.

Both plants tolerate low light well, but philodendrons have a higher tolerance for low light conditions. Pothos like a lot of indirect bright light.

With regard to temperature, pothos like higher temperatures than philodendrons. Pothos is also the more drought-tolerant of the two houseplants.

The plant that looks like a philodendron is pothos; however, these two plants belong to a different genus of the same species.

Can you plant philodendron and pothos together?

You can plant philodendrons and pothos together. Both plants have similar care requirements, and they will thrive. However, ensure there is enough space in the pot for each plant to grow and meet their needs in terms of light, soil, water, and more.

Turns out, my sister was playing a trick on me (but I think she didn’t know the two plants were different either!).

So if you have a pothos and philodendron, you can tell the difference by looking at their: