They scream exotic, produce gigantic and striking foliage that can transform the feel of a room into a mini urban jungle.

They don’t require much care, but, if something isn’t quite right with their growing conditions, they’re not long in letting you know.

Why Does my Dieffenbachia have Curly Leaves?

Too much fertilizer on dumb canes causes the tips of leaves to curl inward. Additionally, heat stress, various pest problems, too high a humidity level, and over exposure to light can cause curly leaves on a Dieffenbachia plant.

5 Common Problems (and Fixes) for Curling Leaves on Dumb Canes

The most common issue dieffenbachia plants experience is too much fertilizer. They’re a tropical species being grown in an artificial climate.

They have no idea what’s happening outside so don’t know when to go to sleep (aka dormancy).

Something certain species of plant pests find all too appetizing.

When you notice the leaves on your dumb cane curling, here’s what you ought to know…

1. Excessive Fertilizing Causes the Outer Edges of Leaves to Curl

There’s no set frequency for how often to fertilize dumb canes or at what strength. Only that it’s preferable to use a balanced fertilizer.

Mature plants do fine being fertilized twice monthly. On younger plants, diluted liquid fertilizer twice monthly is safer. That is not a rule though because the less light the plants get, the less need it has for fertilizer.

When it’s time to stop fertilizing, you’ll see the outer edges of leaves curl. When that happens, stop fertilizing and leach the soil to get rid of excess salt and other trace minerals that’s accumulated in the soil.

2. Pests Cause the Tips of Leaves to Curl

Aphids, mealybugs, whiteflies, and spider mites are among the most common pests that are attracted to tropical houseplants. Each of them pierces the leaves to feed on the juices inside them.

The more insects feed, the more damage you’ll see. As most are tiny, and invisible to the naked eye, it’s usually the damage you’ll see first. Not the insect. On dumb canes, leaf curl on the outer edges and the leaf tips are early signs of a pest problem.

The simplest solution to rid your plants of pests is to use neem oil – an organic pesticide.

3. Insufficient Lighting Can Cause Curling on Mature Leaf Tips

Dumb Canes are medium-light plants that can tolerate low light levels. The lower the lighting, the slower the growth.

Light also effects heat and that in turn impacts how much water is lost to evaporation. The hotter the growing climate, the more the plant will drink and that increases its natural transpiration rate (the amount of water vapor released through the leaves).

When the lighting is too strong for a dieffenbachia plant, the tips of mature leaves curl and the growth on younger leaves get stunted, often having brown edges.

Check the new and mature leaves on your plant. New leaves with stunted growth and browning edges as well as curling old leaves is a sign of over-exposure to light.

The solution is to move the plant to a location with a little more shade, then it’ll just need time to recover.

4. Heat Stress can Cause Single Leaves to Curl

Heat stress leads to water evaporating faster than it usually would. A plants way to protect against heat is to curl up. The ideal temperatures for dieffenbachia plants are between 65 to 75 degrees Fahrenheit (18-24 degrees Celsius).

Indoor conditions such as growing a container plant against a wall can increase temperatures in certain parts of the plant, as can grouping too many plants together. Something that’s done to increase humidity around plants.

Grouping plants does work. Overcrowding plants can lead to high spikes in temperature and humidity.

If you’re seeing curling leaves on only one side of the plant, it’s possible there’s an increase in temperatures causing the leaves to curl.

Low temperatures result in yellowing and drooping. Higher temperatures in parts of the part can cause some leaves to curl inward to prevent transpiration. It’s essentially the plant trying to conserve what little water it has in the leaves.

Heat stress can be prevented by rotating the plant. The more it’s rotated, the more evenly light is distributed and that ensures there’s an adequate amount of air circulation reaching all the leaves too, rather than just those at the front.

5. Droopy and Yellow Leaves are Early Indicators of Watering Problems

Dieffenbachia are really good at letting you know when they need a drink. Drooping leaves indicate it’s time to water them, and if you leave them for too long before watering, the leaves turn yellow.

Overwatering dumb canes is more problematic because that can lead to root rot and that’s more-often-than-not, a drainage problem with the soil rather than watering too frequently.

Overwatered plants can present with leaf curl, but it’ll be accompanied with yellow leaves, drooping, and if not fixed, will lead to leaf drop.

If you suspect the plant’s been over-watered, or the soil is retaining too much moisture, repot it fresh well-draining soil.

The solution for curling yellow leaves that droop isn’t to expose it to more light in the hopes the soil will dry out faster because excessive light will cause leaf curl.

Inspect the plant to find all the symptoms it’s showing to avoid swapping one problem for another.

Should curly leaves be cut off the plant?

No. Curling leaves are fixable by correcting the growing conditions. It’s only a sign that the plant (or that single leaf) is struggling. It’s not dying and won’t harm any other part of the plant.

Do Dumb Canes need to be fertilized all year?

This depends. In their natural habitat, dieffenbachia plants would go through a period of dormancy. Indoors, they’re in an artificial growing climate entirely controlled by you. It is safe to continue fertilizing dumb canes for as long as its showing signs of growth.

When growth stops, there’s no need for fertilizer. By continuing to fertilize when the plant stops growing, that’s when you’re more likely to experience leaf curl as it won’t have any need for the fertilizer. 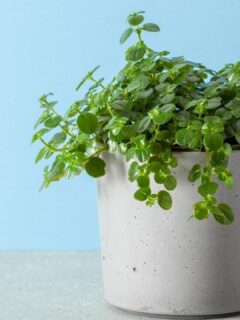