How To Properly Care for Sundew Plants 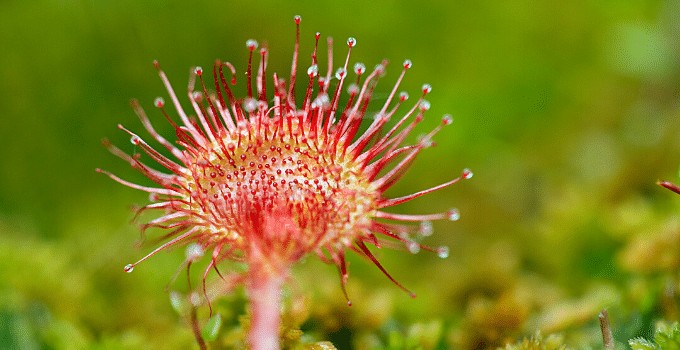 Arguably one of the most fascinating plants to the average public is the carnivorous variety. Plants are thought as being beautiful, dainty, and harmless. Not these specimens!

The Sundew plant is among the largest genera under carnivorous plants, Drosera. All of these individuals are known for their sticky tentacle-shaped appendages used to catch bugs that are accompanied by a mucous lining.

Flora belonging to Drosera, like the Sundew, is found nearly all over the world. In fact, they naturally occur everywhere aside from Antarctica.

They are typically found in rather moist places with plenty of sunlight including swamps and marshes. Raising a Sundew plant indoors can be advantageous; your own bug killer. Not only that, but they are relatively easy to keep alive. 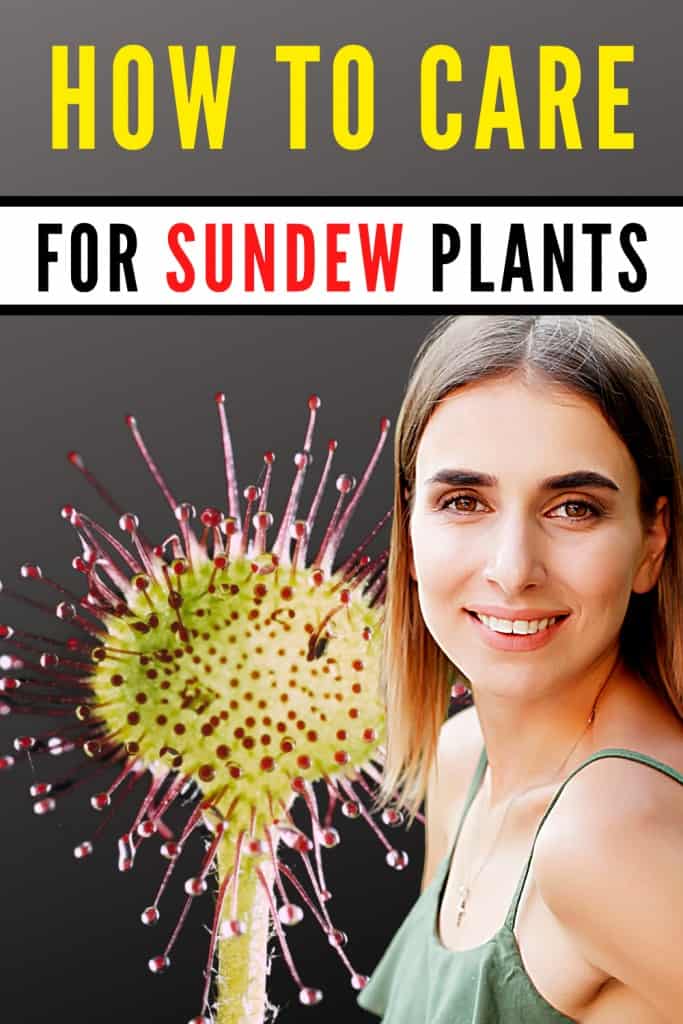 Members of Droseraceae are rather fun to keep in the confines of your home. You might assume that they take more work than the typical houseplant, but that’s not necessarily the case. There are a few differences, but with the proper research, you should be all set.

There are soil mixes with carnivorous plants specifically in mind. We strongly urge you not to invest in a commercial garden soil, as these will be inadequate.

In fact, their nitrogen levels are usually too high. Placing a carnivorous plant in this soil would cause it to go into shock and most likely die.

Sundew plants prefer to grow in soil that is acidic, and low in nutrients. Their natural habitats, bogs and marshes, share these qualities.

For most members belonging to Drosera, full sun is preferred. In fact, carnivorous plants in general need this source of energy. It takes a lot for them to use their appendages to take in insects.

The milky mucous lining is also quite taxing to produce. Bright, indirect sunlight should be given to these plants for at least four hours out of the day if bright light can’t be provided.

There are a few exceptions to this rule. The Queensland Sundew, for instance, needs low-level light. Just be sure to look into the particular species of Drosera that you plan to bring into your home.

If your house doesn’t have a lot of light, you might want to consider a different plant. We have an article about the best houseplants for low light.

Looking at where these plants live, it’s no surprise that they need the soil to stay consistently saturated. There are a few techniques that work to combat this problem.

The popular “tray method” is a great way to go about making sure that the plant has enough water.

All you have to do is put your potted plant on top of a tray. As you water, the excess will run off onto the tray. This stops the Sundew from drying out.

If your house is relatively warm, then you might be at an advantage. Drosera members generally prefer their environment to stay between 16 and 24 degrees Celsius.

Did you know that these plants can actually go into a state of dormancy? This happens on both ends of the spectrum. The winter months spark a dormancy where the temperature drops below 10 degrees Celsius.

Anything above 26 degrees Celsius can produce the same results. If this happens, don’t worry. Your Sundew is merely protecting itself. This state can last up to a few months, in extreme changes.

Those who have ever experienced a bog or marshland usually will say that there is a good amount of humidity. Carnivorous plants, as a whole, tend to require this of their environment.

Indoor Sundews are keen on being placed in a home that has an average humidity anywhere between 40 and 60 percent. If you’re unsure about the level of humidity within your house, you can add additional measures.

Misting once or twice a day can accomplish this.

Carnivorous plants are a bit tricky when it comes to fertilizer use. These floras already prefer a low nutrient living space.

By implementing the use of fertilizers, you’re adding potentially toxic chemicals that can burn the leaves, or worse.

When in doubt, just don’t add it. There are mild all-purpose fertilizers, but even these should be diluted. One of the main reasons why people add food to their Drosera individuals is to enhance the potential for pest capture.

This isn’t as necessary indoors.

Although they share similar characteristics, there is enough of a difference that would change the propagation techniques. As a general rule, you can propagate your Sundew through leaf or flower stalk cuttings.

We will go over these in greater length later on in the article.

The growth of a carnivorous plant depends greatly on how much food that they receive. Most species of Drosera will grow to their full height about a year and a half.

Other species of Sundews take a bit longer, sometimes even three years. There is also a great diversity in the size of a matured individual.

The biggest species that you can own, the Giant Sundew, is only three feet in height.

Most Sundew species can last a few years without the need to be repotted. Of course, this does change based on the specific species that you own.

After looking into data provided by carnivorous plant enthusiasts, it seems as though the larger species take about two years to be repotted.

The smaller individuals tend to need it annually, perhaps because the roots grow at a quicker rate. You’ll want to go about this process at the warmer times of the year, preferably in the early stages of spring. 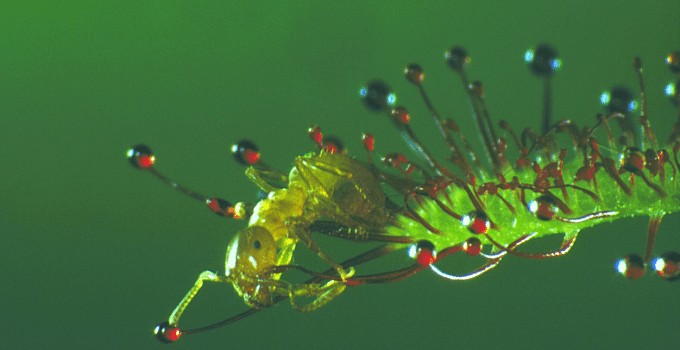 They are called carnivorous plants for a reason: This picture shows a poor ant that got caught by a Sundew (Sundew drosera).

THE WATERING BASICS FOR SUNDEW PLANTS

As mentioned earlier on it is important to take extra care when watering your Sundew plant. They demand a near-constant trickle of water to reach their roots.

You can either keep watering them as if they were any other flora species. Or, you opt for the tray method. This technique involves allowing the pot to sit on a tray with the excess water.

Another noteworthy point to make about watering carnivorous plants is in regards to the type of water that you use. Mineral-free water is the most ideal.

Some tap water contains over 50 parts per million impurities. This would likely cause havoc to your Drosera. Unless you have relatively pure tap water, use distilled water.

The easiest way to propagate a Sundew plant is to take leaf cuttings. In fact, it’s been said that plant owners will occasionally do this on accident, finding new sprouts forming in their plants. So then, let’s look at how to copy your precious carnivorous plant through leaf cuttings. 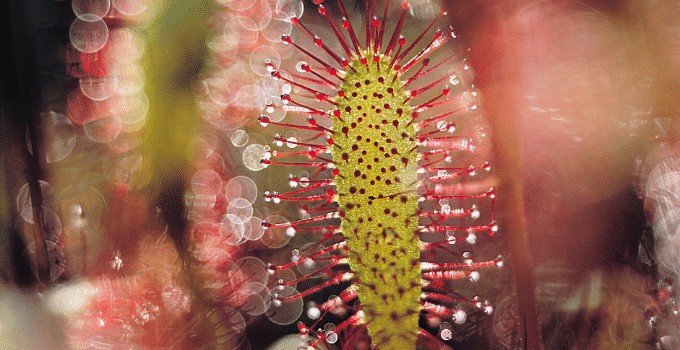 A macro shot of the carnivorous plant Sundew anglica.

It might sound a bit weird to say that these bug-eating plants can be taken down by insects. But, there are some pests that can damage a carnivorous plant, such as the Sundew plant. Fortunately, they are all relatively easy to treat.

There are a number of different types of pests that will go after your Drosera. For the insects, you can find aphids, mealy bugs, scale, spider mites, thrips, and moths. Powdery mildew can also appear in the form of white spots along the plant.

Most pests can be dealt with through several rounds of insecticides and fungicides. Just be sure to do your research before attempting to rid your carnivorous plant of its unwanted visitor.

Even if you’re experienced in raising plants, Drosera may be completely different. But, don’t worry. We’ve got you covered. Here are some problems that you might find with your Sundew plant.

Cause: We realize that this might not sound like a problem at all, but carnivorous plants need their mucous lining to catch bugs. If your Drosera is lacking in sticky properties, it usually is telling you that there isn’t enough humidity.

Remedy: Adding more humidity is a rather simple thing to do. You can lightly mist your Drosera, add a humidifier, or move it to a spot in the house that has higher levels of humidity.

Cause: The existence of leaves that droop is most likely an indicator that your plant needs more water.

Remedy: To increase the amount of moisture, increase your watering session. We also highly recommend using the tray method so that your Sundew never dries out.

Cause: As you might expect, a blackened individual is not a good sign. Heat stress is typically the reason for this happening.

Remedy: If you don’t catch this problem soon enough, your Sundew may die back to the roots. Simply move it to another room that isn’t quite as warm and allow it to come back over the next few months.

Cause: Although not as critical as black leaves, a brown shade isn’t all that great either. This color is generally because of water issues. Or the soil may be packed in too tightly.

Remedy: Try to see which problem you have first by adding more water than you would. Brown leaves can also be due to under watering, so just pay attention. If neither of those work, carefully remove the plant from its pot and transfer it.

Carnivorous plants aren’t all that tricky in terms of care, as long as you keep these five points in mind!

What do Sundew plants eat?

As we’ve stated earlier on in this article, insects are on the menu. What you might have not known is the process it takes for these plants to get a proper meal. Once their prey is trapped, it takes about fifteen minutes to kill it, and a few weeks to fully digest the insect.

Is the Sundew plant poisonous?

Although they aren’t technically poisonous, Sundews have something called “contraindications”. If you were to touch a carnivorous plant too often, you might experience irritation in the digestive tract.

Where can you buy a Sundew plant?

There are plenty of locations where you can go about buying your own carnivorous plant. Plenty of garden centers have keyed in to the appeal of these insect eaters. They are also sold online! 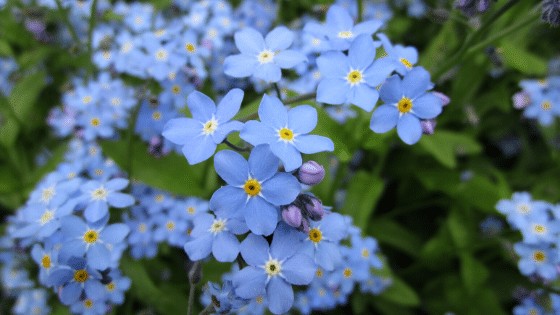 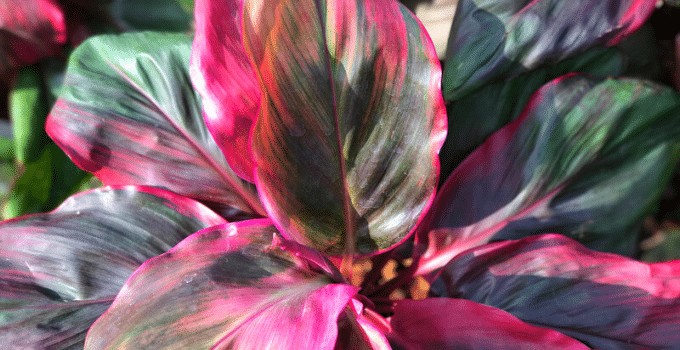