Are lilies perennials? Lilies, or the Lilium genus, are beautiful and popular flowering plants. They belong to a large family of fifteen genera and six hundred and ten species.

You can distinguish between four different flower types: trumpet, funnel, bowl, and recurved, according to the American Journal of Botany.

There are many lilies, such as the calla lily (not a true Lilly). They grow in your garden and are hardy in USDA Hardiness zones 10-12. These flowers are also popular cut flowers as they are long-lasting.

Since there’s a wide variety of lilies, their ability to withstand an especially cold winter varies. Not all lily flowers are cold hardy.

Are Lilies Annuals or Perennials?

Most lilies are perennials. They can survive harsh winter conditions and continue returning year after year. They produce lily bulbs that grow into significant clusters. There are a few lily types that are not perennials.

Lilies are Perennials: What it Means for your Garden

Many lilies start to bloom early on in the summer and continue to show their beauty into the fall, but lilies can bloom in the spring with proper care. However, some varieties only bloom in summer for 2-3 weeks.

Nevertheless, you will be able to look forward to your lilies blooming year after year. There is no need to be concerned about them dying during a hard freeze or needing to replant next year.

Which Lilies are Annuals?

The most popular varieties of lilies are perennial plants, including Easter lilies, Asiatic lilies, and Oriental lilies. Lilies come from a large family of flowering plants. Not every ‘lily’ is a true lily.

True lilies bloom for longer periods and belong to the Lilium genus. Their bulbs produce large distinct fragrant flowers. Their leaves form a spiral up the whole stem.

However, you may occasionally come across a lily that isn’t a perennial. Chances are that it either isn’t a true lily, or you don’t reside in one of the regions where that type of lily is a perennial.

How Regions can Have an Impact on Year-Round Lily Growth

If you’ve double-checked that the type of lily you’ve planted is a perennial, but it’s not coming back the following year, then you most likely don’t live in a region ideal for perennial regrowth.

Even though Easter lilies can withstand extremely cold temperatures, they may not be considered perennials in every region.

How to Grow Lillies

Use soil that is neutral to acidic. A soil mix consisting of sandy loam, peat, sand, or pumice produces the best results.

The ideal soil pH is between 6.3 to 6.8, according to the University of Maryland Extension.

Vernalize them. This will ensure they will be flowering, says California agriculture.

Medium to high light levels of around 2500-foot candles is best. Light intensity does not affect plant growth.

Lillies grow at the same rate in higher light compared to lower light, according to Michigan State University.

The ideal humidity is between 50-60%. They prefer high humidity levels but misting should be avoided.

These plants grow well in containers with drainage holes. For larger species, you will need additional support.

Stabilize the plant with a trellis or stake.

How to Care for your Lilies Throughout the Winter

Since most lilies are perennials, you don’t need to do much to care for them through the winter. Varieties such as Stargazer are considered easy to grow. But it is still necessary to prepare them for dormancy by withholding water and food. 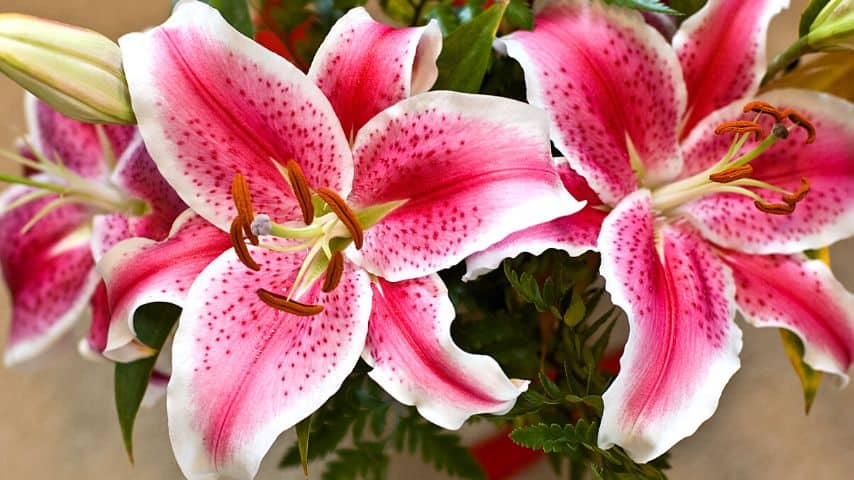 Though some lily varieties, like the Stargazer lily, are easy to grow, you still need to prepare them for dormancy.

Let the foliage die down in autumn.

You should place a thick layer of mulch or pine needles over your bed of lilies to protect the bulbs and prevent an early bloom from frostbite. If your lilies are potted, you will still need to water them throughout the winter, though.

Alternatively, you can overwinter your lilies by digging up the bulbs and placing them on a piece of cardboard to dry out before safely storing them through the winter. However, this is a somewhat complicated process that usually isn’t needed for your lilies to return next year.

Hybrid lilies can be segmented into nine different groups of Lillies, according to the University of Florida. The groups consist of Oriental as well as Asiatic cultivars, among others.

In Florida, late fall to late spring is the main season to cultivate these flowers. Early, mid-and late summer is when they produce flowers for most gardeners. 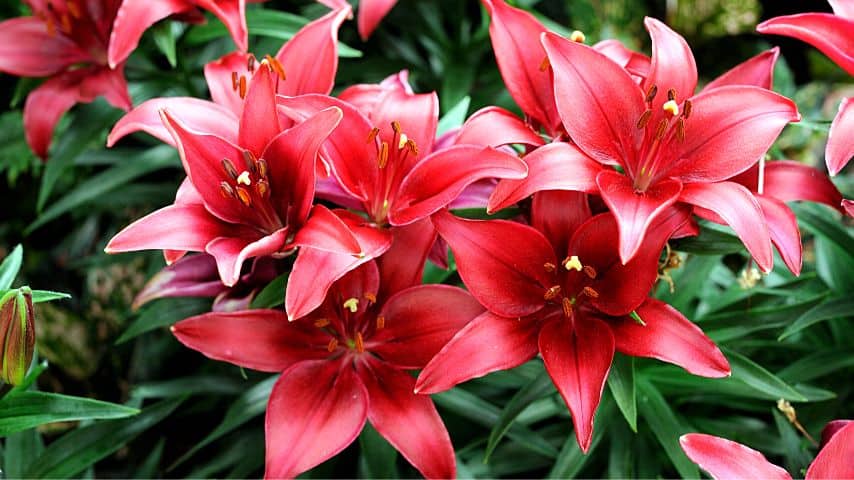 You can cultivate hybrid lilies from late fall to late spring.

One oriental lily is Stargazer. It comes back year after year.

They are renowned for their showy upright flowers. They belong to the Lilly spp. and produce beautiful flowers in different colors if you believe the University of Wisconsin. Some types are:

There are different Asiatic cultivars available. Popular ones are:

How many times do lilies bloom?

Most lilies come back yearly. They only bloom once yearly for 2-3 weeks. After being dormant for about eight weeks during the winter. Some types of lilies will bloom for the entire summer.

How do you make lilies last longer?

After lilies have been cut and placed in a vase, they need a cool environment away from direct sunlight to stay fresh. Place them in fresh water and out of the sun.

What conditions do lilies need to grow?

When planted, lilies need a little bit of sun with partial shade. They grow best in soil that’s well-draining and retains some moisture. Add mulch and other organic matter for optimal growth.

Conclusion to Are Lilies Perennials

Most lilies are perennials. For your lilies to thrive during the winter, you need not provide them with much care. They come back as gorgeous as ever the following growing season. Some so-called lilies aren’t true lilies. They may not be perennials. Lilies are only perennials in particular regions.