6 Insects That Love Eating Your Basil — & How to Defeat Them 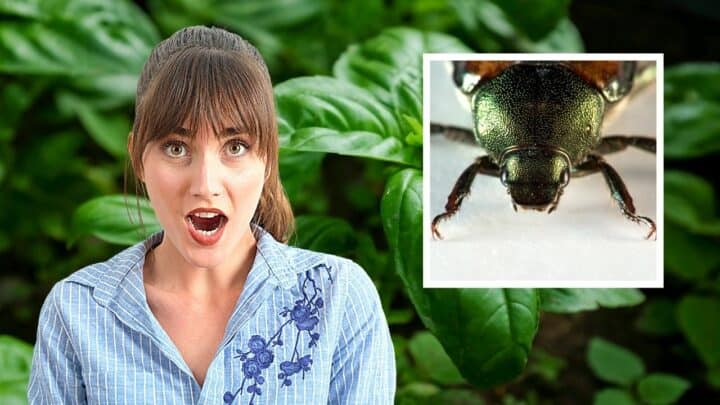 Holes on the leaves of basil plants are a symptom of insects eating them.

Nobody wants to share their basil with garden pests. We grow herbs and vegetables to put on our own tables. Not to feed the local critter population.

When you find holes on the leaves of your basil plant, you need to play detective to discover the offending insect… Then take proactive measures to defeat it.

What is eating my basil?

A handful of insects are attracted to the basil plant. The Japanese Beetle, slugs, thrips, aphids, spider mites, and some caterpillars. Smaller insects can be removed with a strong water spray, while larger garden pests can be picked off by hand.

Japanese beetles aren’t fussy eaters. The only part of a plant they don’t eat is the stems. The softer plant tissue of leaves and flowerheads will be destroyed.

The damage these pests cause is indistinguishable. Japanese beetles skeletonize basil leaves. There’ll be small holes punctured all over the leaves.

Wherever skeletonized leaves are, there’ll be Japanese beetles near it.

Finding them is easy. They don’t exactly hide.

The Japanese beetle is about a half-inch in size, has a bluey-green head with an almost copper-colored back. A fairly unique look.

Getting rid of them is straightforward. You can pick them off by hand, or knock the leaves and they’ll fall off.

It’s easier to knock these off at night when they’re more docile. Drop them into a container with dish detergent and they’ll drown.

That’s how to get rid of the Japanese beetle, but it won’t stop them returning.

Once these feed on a plant, they lay eggs in the leaves. When those hatch, little grubs emerge. They make their way underground where they’ll overwinter, feeding on plant roots underground.

If you have your basil plant near a patch of grass, look for brown patches on your lawn.

That’s an indication of the grubs feeding beneath ground. Those will hatch as adults and start devouring your garden plants again.

Late May to late June is when Japanese beetles are most active. To prevent them from flying onto your basil plants, use row covers. It won’t stop any grubs that pop up from underground though.

Neem oil is your best bet to control Japanese beetles long-term because even though they will still eat your leaves, the chemicals get into their eggs causing the larvae to die.

It won’t save your entire basil plant this season, but it will prevent grubs from devouring other plants from underground over the entire winter.

Treating the problem correctly this season prevents a repeat of the same next year.

Slugs are nighttime feeders. Unless you’re out at night with a flashlight, you won’t catch them in the act.

More likely, you’ll bear witness to the damage they leave in their wake.

The damage slugs do to the leaves of basil plants are usually contained to the lower leaves. They can climb higher up though.

An effective slug control technique is to give them another playground. Like, your compost bin where they help break down decaying material to put back into the soil.

If you’re sluggish about letting slugs run rampant in your compost (or anywhere in your garden) the crueler approach is to give your mulch a sprinkling of diatomaceous earth.

The sharpness of diatomaceous earth scratches the skin on slugs, causing them to dehydrate and die.

It’s the mulch around your plants that attract slugs. The basil itself is just the icing on the cake.

Aphids are a common garden pest. They’re troublesome to spot because they’re the size of a tiny dot.

These are often hidden until their population soars. Once that happens, ants actually help them destroy more of your plant’s leaves.

It’s more likely to be aphids that’s destroying your basil plant, and the ants are helping them to do that.

The thing with aphids is that they excrete honeydew. A sweet sugary substance that the ants feed on. Ants don’t eat your plants. They feed on the honeydew excreted by aphids, whiteflies, and mealybugs.

It’s in an ants best interest to protect a colony of aphids.

When there’s an influx of these, there’s a lot of honeydew on the leaves of your basil plant, making it attractive to ants.

Thrips are another nocturnal feeder, and similar to other insects with teeth, these pierce holes in basil leaves to feed on the sap.

Now, because the leaves get punctured, air is introduced, and that causes a bleaching discoloration to occur.

Similar to many other plant pests, thrips congregate. You won’t get one. You’ll get an army of them. As such, the discoloration to your basil leaves won’t be isolated.

Once these things get a start at eating your basil, they’ll lay their eggs in the stems. They don’t emerge from there though.

When the eggs pupate, that happens underground. Not in the stem.  That’s why you can treat the problem with insecticidal soap or a neem oil application… only to find the critters return the following week.

To treat an infestation of thrips, repeat treatments are needed.

For best effect, place yellow sticky traps among your plants to catch any adult ones that do emerge after you’ve treated it with an insecticide application.

Caterpillars are strong climbers and there’s one in particular that’s very fond of the basil plant. The green cabbage looper. Anything that’s part of the vegetable family, cruciferous, the looper worm will devour it.

They don’t cause as extensive of damage as the Japanese beetle does by skeletonizing the leaves, but they will still puncture some big holes in the leaves.

A way to tell if you’re seeing caterpillar damage is the spacing. If you’re only seeing a hole here and there that isn’t very close together, that’s likely to be caused by a caterpillar.

The pests themselves are difficult to spot because the color of the looper worm blends with plant foliage so they’re naturally camouflaged.

Your safest defense to sporadic holes on basil leaves is to treat it with neem oil.

These are a relative to spiders, but as the name suggests, they are a mite. Just like thrips and aphids.  You’re unlikely to see them though.

In fact, without at least a 10x magnifying glass, you won’t see these. What you will see is the webs they spin once they decide to set up camp on the leaves of your basil plant.

Spider mites survive in colonies so if you have these, you’re likely to have dozens of them.

Spider mites do eat the leaves of basil plants, but given their miniscule size, you’ll barely notice the holes. What you will notice is the yellow discoloration to the plants leaves.

Similar to how aphids and thrips pierce holes in the leaves to feed on the sap, spider mites do the same, but the holes are much smaller because the insects are tiny.

The damage to basil plants is more to do with the stress that spider mites put on the plant, rather than the cosmetic damage they cause.

Nevertheless, you still need to treat a spider mite infestation. If they’re left to do what they like, the long-term stress toll on plants will cause them to wilt and eventually struggle to survive.

No. Ants don’t eat plants. They feed on the honeydew excreted by other insects.  Ladybugs eat aphids. Ants will protect an existing aphid population to harvest the honeydew. If the ant colony is large enough, ladybugs will take flight to find food elsewhere.

What’s the best way to get rid of pests on my basil plant?

For smaller insects like aphids, spider mites, and thrips, spray the underside of all the leaves with water. Apply an insecticide to prevent them from returning. For larger garden critters like beetles and slugs, pick them off by hand or knock the leaves until they fall off. 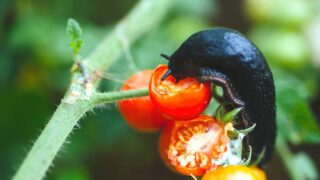 Previous
What is Eating Holes in My Tomatoes? — Revealed

Next
How to Harvest Dill without Killing the Plant — 6 Rules