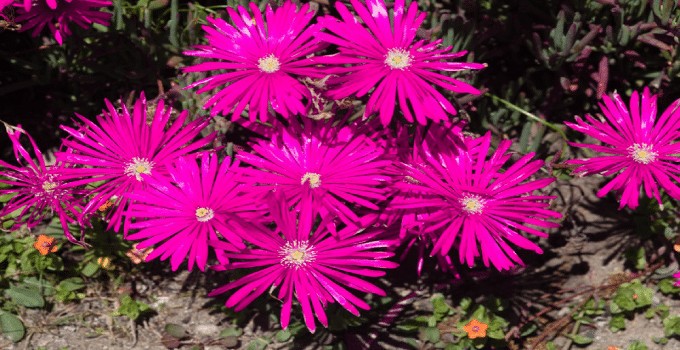 When you hear about Ice Plants, you might think of a flora that can tolerate the frosty continent of Alaska. You may be surprised to find that it’s quite the opposite.

Ice Plants refer to a family of succulents that thrive alongside the coastal regions of Australia, South Africa, the Mediterranean, and California in the United States.

The Ice Plant family, or Aizoaceae, are all succulents. This name is Greek for “Stone” and “face”, alluding to their stone-like leaves that are fleshy. These leaves have small white dots on them that look like the formation of ice crystals, thus lending them their name.

Ice Plants are often picked for their fun, bright display of flowers that sprout in a similar way to daisies. They are also considered to be an easy-keeper, making them a fun indoor addition. In this article, we will explore the needs of these succulents. 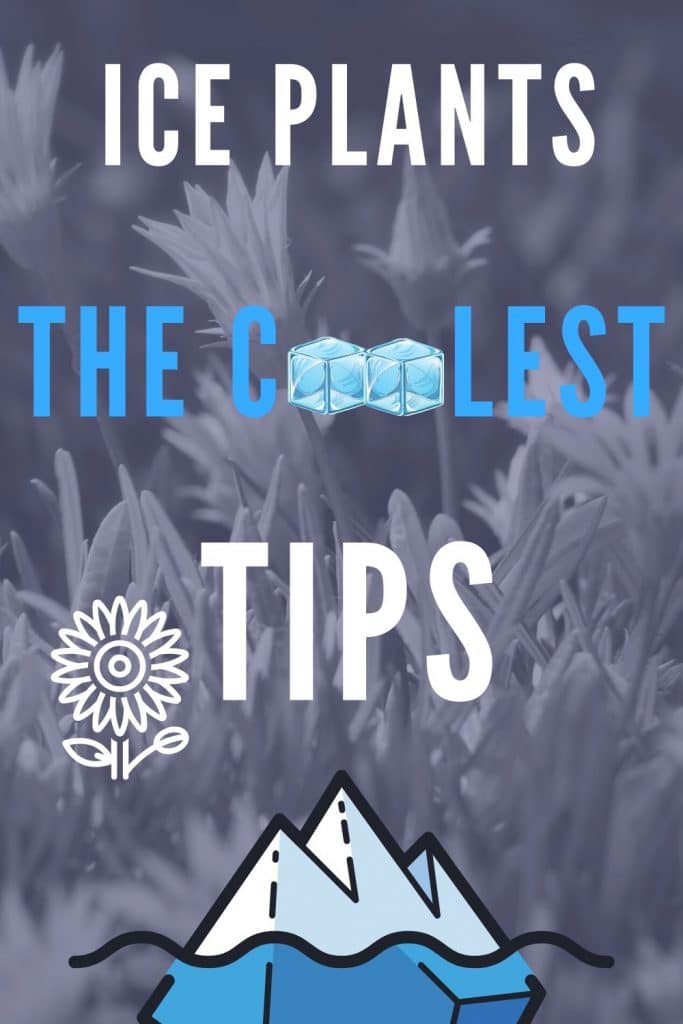 The natural habitat of an Ice Plant lacks frigid temperatures. This makes them great candidates for a home grown individual. Although easy to keep happy, you’ll need to provide them with a few essentials along the way.

Aizoaceae plants have a strong preference when it comes to the soil that they are placed in. Dense soils, like clay, tend to negatively impact them since they hold onto water.

Instead, you should put your Ice Plant in a container or pot that has well-draining soil with neutral pH levels. We suggest using a mixture of sand, gravel, and loam.

Chances are that you’ve been trained to believe that indoor plants can’t be exposed to too much sunlight. Well, the Ice Plant disproves this theory.

Unlike your Orchids, Lillies, and Roses, Ice Plants need sun exposure. They can grow in partial shade, but do best with full sunshine. This gives you more options for placement around your home.

Having the adaptation to hold onto water in their leaves, Ice Plants are notorious for being drought-resistant. Despite this, they still require a consistent watering schedule. We will go into this later on in the article, but you can expect to water your Ice Plant every week.

Growing a member of Aizoaceae indoors means that you don’t have to worry about temperature quite as much. Those in the wild don’t survive when the temperature drops below 2 degrees Celsius.

Aim to keep your home at around 10 to 21 degrees Celsius, and your plant will be just fine!

Succulents, in general, aren’t fans of environments with high humidity. Root rot and other fungal problems tend to be an issue when there is too much moisture in the air. Some of your indoor plants probably require routine misting or a humidifier.

Don’t use these tactics on your Ice Plant. Also, avoid placing them in a room with naturally high humidity like the bathroom.

The flowers of an Ice Plant sport a range of colors, from pink to orange to yellow. Unless the soil is high in nutrients, these individuals may need the added help of a fertilizer. A balanced fertilizer should only be used in the spring to promote healthy growth. Other than that, they simply don’t need it!

Ice Plants can be propagated through several methods like division, cuttings, and seed germination. Stem cuttings are among the easier ways to get a clone. This process should be done in the early spring for the best results. Unsure how to go about doing this? Don’t worry! We’ll have the steps later on.

Aizoaceae, as a whole, don’t really grow to be all that big. Being closer to a shrub, Ice Plants only get to about six inches in height with a width of four feet. When all of their needs are met, they can actually get to this mature state in about a month. Some species of Ice Plants can spread out and become leggy, which can be fixed with regular trimming.

With such a hardy nature, the Ice Plant doesn’t require repotting. The roots don’t get crowded, and they stay rather small. One situation where you may be forced to transfer your Aizoaceae to another container is if the roots get too wet. Oversaturation is a major problem for Ice Plants. In situations where the plant can’t dry out quickly, you’ll want to repot in order to avoid fungal problems and root rot.

Being succulents, providing enough water is the least of your worries. Deciding how much water and when can be a tricky feat. To take the guesswork out, we’ve broken down the various elements of keeping an Ice Plant happily watered without rotting.

The first tip when it comes to watering your Ice Plant is to make sure that the water can escape the container. We can’t stress this enough. When an Aizoaceae succulent sits in water, it increases the likelihood of wilting away. That’s why choosing a loose, porous soil that won’t hold onto water is pivotal.

An interesting fact is that the watering schedule for an indoor Ice Plant differs from those kept in a garden. If you were to place it outside, you could leave it alone, letting rain be the only source of moisture. The only time that you would add water is if there isn’t enough rain, as they only need 18 inches total of water per year. Now let’s compare that to an indoor Ice Plant.

Plants kept indoors should be thoroughly saturated once a week at the very most. In fact, most botanists will agree that ten days can be more effective. It gives the soil a chance to completely dry out. Remember, your Ice Plant can do with a little less water.

Surprisingly, the time of day that you choose to water your Ice Plant can make a difference. These individuals are less stressed when given water later on in the day. Just be sure that there is enough light left that the leaves can dry off.

We mentioned earlier on that you could propagate an Ice Plant in a number of different ways. For the sake of both you and your beloved Aizoaceae, we’ve decided to focus on the easiest method, stem cuttings.

Below are the steps involved to successfully create a new individual through the propagation technique, stem cutting. Stem cuttings should be taken during the active growing months, generally between spring and fall. This will ensure that the new individual has a better chance of thriving.

You’ve heard us mention that the Ice Plant can grow unruly, stretching out and becoming a bit leggy at times. The fact of the matter is that they really don’t need much work it comes to pruning. That being said, trimming back even a little can attribute to more vibrant flowers for the next growing season.

Certain factors can naturally aid in reducing the chance of your Ice Plant getting leggy. The amount of sunshine that these Aizoaceae members need tends to limit their longer growth.

When it comes to pruning, you’ll want to complete this task after the blooms fade. This generally lies in the fall. Begin by carefully removing any flowers that have wilted. Dead foliage can also be trimmed back.

If you’ve had an unusually cold draft in your home and your plant has taken a hit, pruning can actually solve this. For whatever reason, if your Aizoaceae dies, you can clip away all of the foliage to the base, and it will likely grow back.

Overall, the Ice Plant is easy to keep healthy. This does not mean, however, that they are invincible. With the wrong conditions, these Aizoaceae members can fall victim to a number of diseases and other problems. Here are the most common:

Cause: Leaves that take on a yellow hue and then proceed to fall off usually mean that the plant has root rot.

Remedy: Root rot is a serious problem for Ice Plants. They can’t sit in water for too long, or else the whole plant will take damage. To go about solving this problem, one would need to carefully remove the plant from the soil and let the roots dry out. After a few days, the Ice Plant can be repotted with a less aggressive watering schedule implemented.

Cause: Those who might be giving their Ice Plant everything it needs could still experience a plant that does not grow brilliant flowers. Adding too much fertilizer will likely be the cause of such issues.

Remedy: The use of fertilizer often does just the opposite, so why would an Ice Plant be lacking in flower production? The blame isn’t necessarily on the fertilizer, but the fact that there is too much Nitrogen. This will promote plenty of growth, just not with flowers. If you see this problem, simply stop using fertilizer. Luckily, these plants don’t need it.

As far as plants go, these succulents are pretty hardy. They don’t require much attention and extra fuss. Even so, you’ll want to keep an eye on their daily needs. To make it easy for you, we’ve laid out the bare essentials.

Do Ice Plants come back every year?

The Ice Plant is known for dying off if they live in an area that is too cold. In these situations, they can grow back, but fortunately you don’t have to worry about that for an indoor individual.

How fast does an Ice Plant spread?

These succulents can cover a fair amount of ground for their size. They can grow to spread out as much as four feet across. This generally only takes a few short months, but they won’t get much bigger.

Can you eat the leaves of an Ice Plant?

Succulents, such as Aloe have been used for a multitude of reasons. The Ice Plant is the same way. Their leaves are safe for both humans and animals alike. Some people will use them in salads, while others can make them into teas. 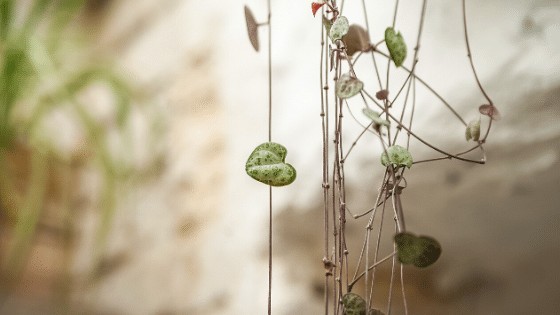 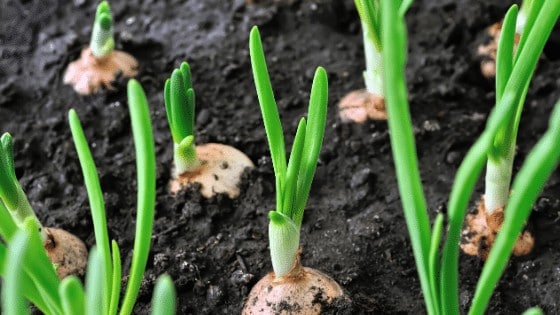 Next
How to Grow Onions The Right Way #1
Comments are closed.