How Often Should I Water An Aloe Plant? The Answer! 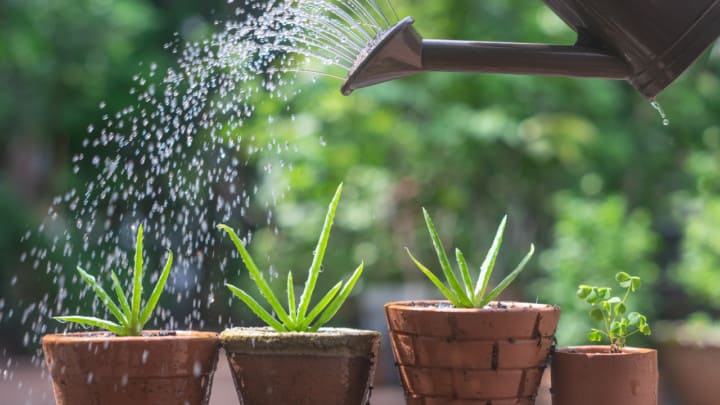 Houseplants are taking the world by storm, and with more people spending time at home they are more popular now than ever.

The aloe plant is a houseplant beloved by many plant parents, due to its low maintenance and usability.

The leaves of the aloe contain a gel that is used to treat burns, and as an ingredient in food and drink.

There are over 500 species of the aloe plant and it is made up of over 90% water, with sword-shaped leaves that hold a high level of water.

So, how often does an aloe plant need to be watered? Read on to find out!

How often should I water my aloe plant?

Aloe plants should be watered twice a month at most during the spring and summer, and as a general rule of thumb every 6 weeks during the fall and winter. They should only be watered once the top part of the soil’s completely dry to the touch.

Aloe plants are fairly low maintenance and in fact, the only struggle in their care is getting the watering schedule correct.

This all depends on where you live and what climate you live in.

You should always listen to your plant’s needs, and it is often the case that you need to feel the soil to see when the plant needs watering again in oppose to choosing a timed schedule.

A rough expectation is that they should be watered once or twice a month during the spring and summer, and around every 6 weeks during the winter.

If you experience warmer winters or cooler summers, this expectation should be adjusted accordingly.

Such as, if your climate is cooler year-round your aloe plant would need to be watered less than if you live in a drier and hotter location.

Aloe plants are typically drought hardy, and it is often that new aloe plant owners end up overwatering their plants.

Aloe plants orientate from southern Africa, a very dry and hot location. As a result, they find it very hard to tolerate overwatering especially if consistent.

If you think that your aloe might be suffering from overwatering, it is best to treat this as soon as possible. If action is not taken then the damage can become too excessive and be hard to reverse.

An early sign of overwatering an aloe plant is it having discolored and almost desaturated leaves. They will start off looking drab and will have much less life in them than before.

As overwatering progress, the aloe’s leaves will become mushy and soft to touch. This is the beginning of your aloe’s leaves becoming rotten, a result of the leaves are holding more water than they can withstand.

In some more severe cases, they may even grow blisters on their leaves from absorbing too much excess water.

However, this process can be reversed if treated quickly and properly.

If in the early stages of overwatering, leave your aloe in a dry but not overly light area for at least 3 days.

Be sure not to leave your aloe in direct sunlight, as the water from your plant needs to gradually dissipate.

Over this time, the soil should start to dry out and your aloe plant should begin to recover.

If this method has little result and the aloe still seems to be suffering from symptoms of overwatering, you should think about repotting your plant.

Remove the aloe from its current pot and lightly brush some of the wet soil from its roots.

Place it into a soil mix of half standard potting soil and half gravel. This will improve the drainage of your soil and will hopefully prevent your aloe from suffering overwatering in the future.

After transplanting, be sure not to water your plant for at least another 3 days. This will give the roots time to dry out completely and start their recovery process.

Although aloe plants have a drought resistance level that is similar to that of a cactus, it is still possible to underwater your plant.

This might be very uncommon, but it can happen.

If your aloe plant is suffering from under-watering, its leaves will appear much thinner than usual.

If left unaided, the leaves will then start to become dry from a lack of moisture. From there, they may turn yellow and brittle to touch.

Due to the hardiness of the aloe plant, under-watering is so much easier to solve than overwatering. It is highly likely that your plant will manage to bounce back to life within a short period of time.

First, with a sterilized pruning tool, remove any dead leaves away from your plant at the base.

This should be your first method of action, as dead leaves can often take away the nutrients to the living parts of your plant.

You should then thoroughly soak your plant until water starts to appear on the drip tray.

Wait around half an hour before pouring away excess water from the tray.

From here, you should continue with a more frequent watering schedule. Be sure to use the touch test to decide when your plant needs watering again.

Can I grow my aloe plant outside?

Depending on the location where you’re living, you can plant aloe vera outdoors. If you live in a location that is not frosty and doesn’t go below 40 degrees Fahrenheit during the winter then it possible to grow your aloe plant outside.

Should an aloe plant be fertilized?

Aloe plants don’t necessarily need to be fertilized at all. If you do choose to fertilize an aloe, do so once a year and in the spring months. 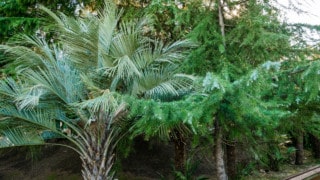 Previous
How Fast Do Pindo Palms Grow? Tell Me! 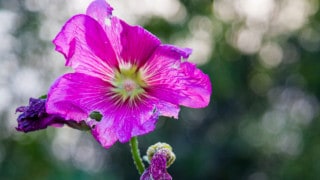 Next
Why Is My Hibiscus Dying? — The Truth Revealed