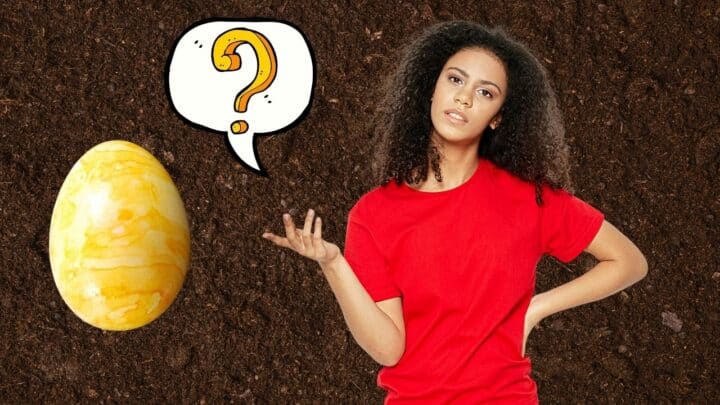 The soil is house for your plant; every plant thrives differently in different soil compositions. While some plants may tolerate acidic pH, others won’t.

An ideal potting mixture will ensure your plant grows with a healthy rooting system.

Some plant owners prefer purchasing premade potting mixtures, while others prefer making their own. Whatever the case, noticing something unusual in your potting mix, like yellow eggs, are a concern for many.

Why Are There Yellow Eggs in My Soil?

The yellow eggs in your soil can be anything from fertilizers to insect eggs. For potted plants, most people use pre-made potting mixtures, which often contain pellets of slow-release fertilizers or perlite that is added to the soil to aerate and aid draining. These pellets are sometimes believed to be yellowish eggs. These yellow eggs could also be slug, snail, or worm eggs. Last but not least, there is also mold and certain types of seeds that strongly resemble yellow eggs.

What Could These “Yellow Eggs” in your Soil Actually Be?

Often times the “yellow eggs” you discover in your soil are of no harm. They are simply slow-release fertilizer pellets that are added to most potting mixtures.

The pellets usually take up to 2 years to degrade. Often the inner part of the pellet degrades first. The tough outer exterior takes longer to degrade.

Insect eggs come in varying shapes and sizes depending on what insect the egg belongs to. Insect eggs are distinctively different from fertilizer pellets. They are smaller in size, have a squishy feel to them, and break easily.

Snail eggs closely resemble fertilizer pellets. However, they appear paler. Worm eggs, on the other hand, are less spherical and more on the elongated side.

You can also expect the yellow eggs to belong to ants. Ant eggs, however, resemble beans and come in varying shades of yellow.

The insect eggs in your soil may also belong to a ladybug, which is rare. Ladybugs are completely harmless, so they aren’t a cause for concern.

If the eggs belong to a ladybug, they will appear more orange than yellow and are slightly elongated and not spherical.

Depending on the plant you are growing, it could produce yellow seeds that resemble eggs. Legumes are a great example of plants that have yellowish seeds.

Often times potting mixture comes with perlite, which over time discolors to resemble yellow-looking eggs. However, perlite is harmless. Its primary function is to increase soil aeration and improve drainage.

Certain types of mold can resemble yellow eggs. It is more than likely that the yellow ball in your soil is mold rather than an egg if your soil has decaying matter.

The mold that appears to be a shade of yellow is often toxic. Hence if you encounter some in your soil, discard the soil immediately.

Do the Yellow Eggs in My Soil Belong to Fungus Gnats?

The Appearance of Fungus Gnats and Its Eggs

Eggs belonging to fungus gnats are white to yellow in color and are found in clusters of 30 or so in the soil. If you notice flying insects approximately 0.2 inches long resembling mosquitoes, it is more than likely the yellow eggs in your soil belonged to a Fungus gnat.

How to Get Rid of Eggs That Belong to Fungus Gnats?

Generously spray the mixture onto your potting mix when it is dry.

Alternatively, you can let your soil dry out completely, providing a hostile environment to fungus gnats. Drying soil deters the hatching of the larva.

You could also completely discard the soil you have found eggs in and repot your plant.

Additionally, you can use yellow sticky cards. Flytrap cards are the most effective means of trapping fungus gnats as they are attracted to yellow color by nature.

You can also apply insecticide onto your soil mixture to kill any hatched larvae.

If your potting mix is infested with decaying matter, you create an ideal environment for a female fungus gnat to lay her eggs. Remove any debris from your soil; this includes leaves, fruit, sticks, or anything that can trap moisture.

Moreover, avoid overwatering your soil. Ensure that your plants are planted in pots with drainage holes.

Alternatively, avoid watering your plant if the soil is wet to touch. You can also add perlite or vermiculite to improve soil aeration.

If you suspect a fungus gnat infestation has already broken out, separate your healthy plants from your infested plants.

What Should I Do With the Yellow Eggs in My Soil?

If the yellow eggs belong to harmful insects such as ants or spiders, remove the eggs and discard them carefully as they don’t hatch. A more extreme measure is to discard the soil entirely to reduce the risk of hatching altogether.

However, if the eggs belong to worms, which are beneficial to your plant if you are into vermicomposting, then let the eggs hatch, preferably outdoors.

Does temperature affect how quickly the pellets take to disappear?

Most often, the fertilizer pellets degrade quicker at room temperatures close to 70°F (21°C). If they do not disappear, it more likely an insect egg infestation.

Will using insecticides to get rid of yellow eggs damage my houseplant?

Insecticides can damage your houseplants if used in excess. However, the damage never leads to a houseplant’s death.

Next
What Causes White Spots on Begonia Leaves? 4 Reasons
Comments are closed.