One thing I know for certain is that the soil around my houseplants should not be yellow.

Imagine my surprise one morning when I went to check on my beloved pretty plants and flowers and discovered what looked like a yellow fungus making my potting soil its home.

How did this happen? I very diligently take care of my plants and conscientiously take detailed notes.

When you see what looks like an off-putting and alarming yellow growth in your plant’s potting soil, it can either be yellow slime mold, called dog vomit slime or Fuligo septica, or it may be the yellow houseplant mushroom, called Leucocoprinus birnbaumii. They’re not dangerous unless ingested. However, the spores of these could trigger an allergic reaction.

Types of Yellow Fungus in Soil

The yellow fungi that grows on your houseplant’s soil could be anything, but let’s look at the common two kinds.

If you are curious, I’ve found both of these on the soil of my houseplants, and I’m eager to teach you about what they are, what they look like, why they appear, and how you can get rid of them. 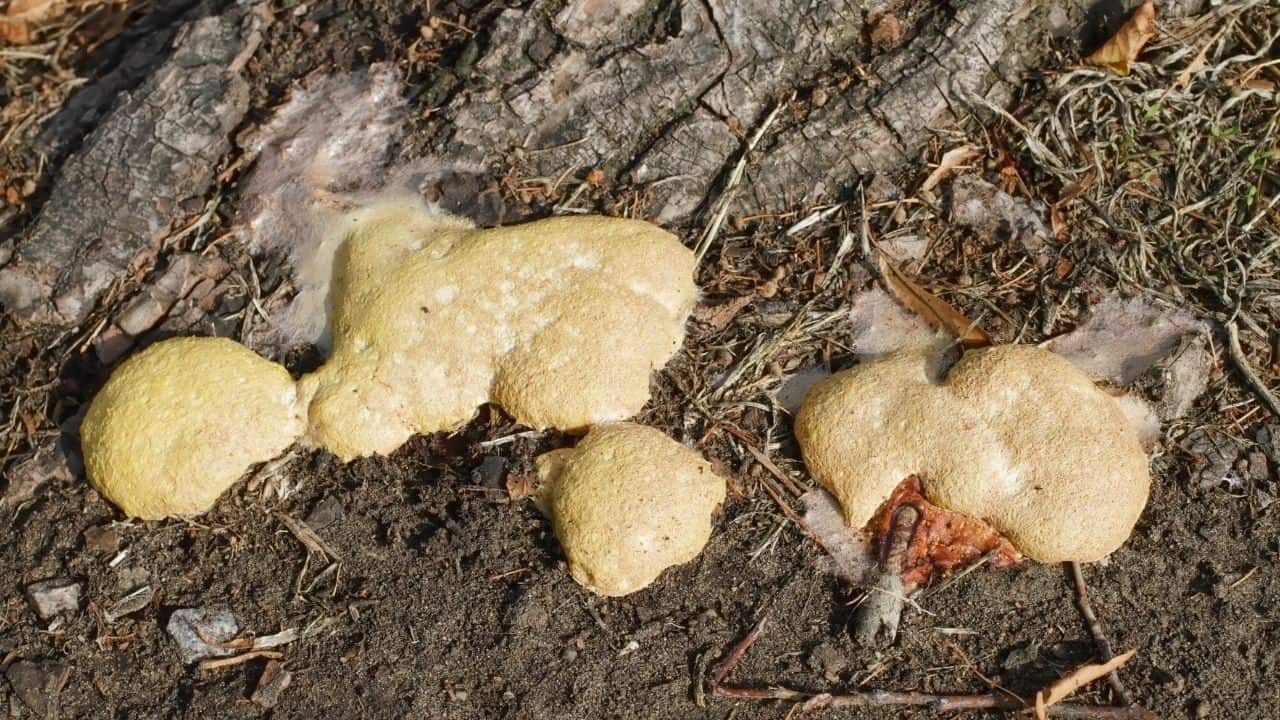 Dog vomit slime may also be known as scrambled egg slime mold because it looks a bit like scrambled eggs. This kind of slime mold is harmless since the organisms are saprophytes, meaning they consume decaying organic materials.

The bad news is that it is not easy to prevent Fuligo septica from growing on soil since the spores survive for a long time and they also spread easily.

If the slime mold is allowed to mature, it can grow up to 8 inches in diameter and up to 1 inch in thickness.

The other bad news is that if your pets or kids ingest this yellow slime, they can get really sick. 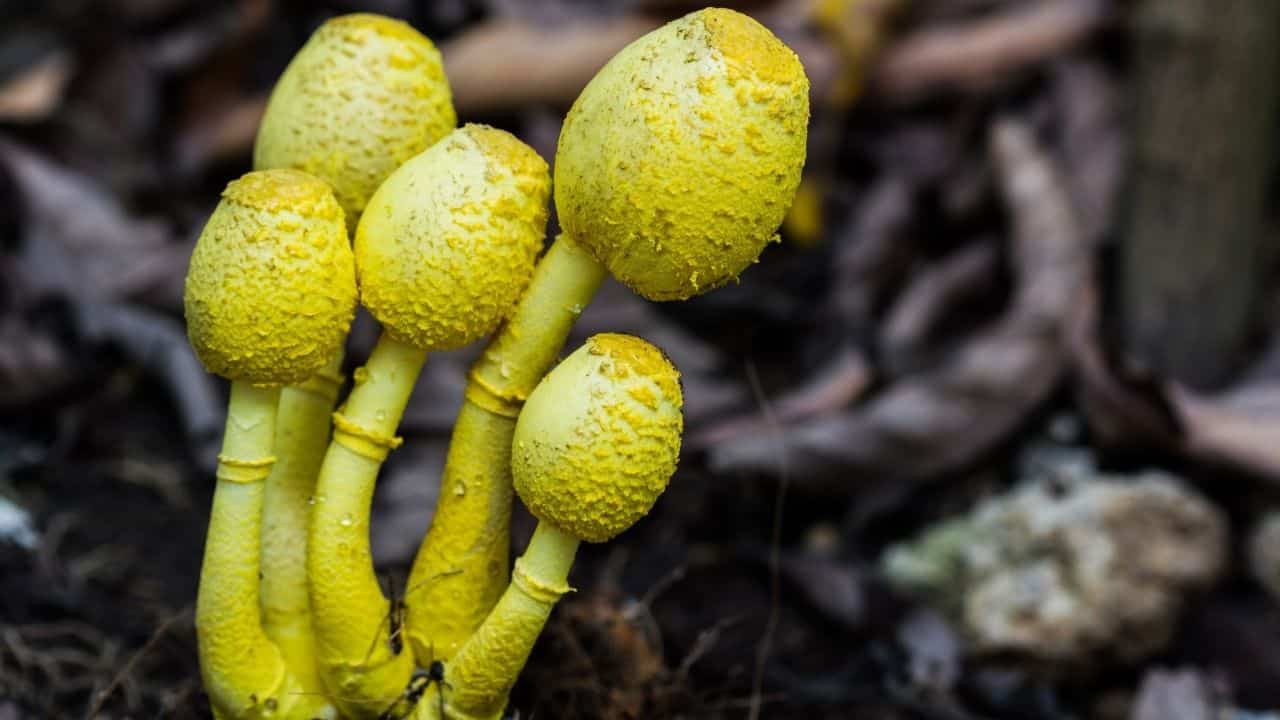 I’ve found that this fungus is very easy to recognize. It looks exactly like little yellow mushrooms popping up next to your houseplant.

These are also known as plant pot dapperlings or flowerpot parasols.

Yellow fungi mushrooms are commonly found in tropical and subtropical areas. They also are saprotrophic, like the dog vomit mold, and can feed on decaying organic matter.

Thus, they won’t harm a healthy houseplant; however, ensure your pets or children don’t ingest these mushrooms.

The causes for both dog vomit slime and yellow mushrooms growing on plant soil are mostly the same. I’ve learned that both of these thrive when the soil is contaminated and when I’ve overwatered.

The spores of the slime mold or mushrooms are invisible and thus, I can’t see them in the soil until they’ve made their appearance as scrambled eggs or mushrooms.

However, the contamination of the soil could happen during the processing of the potting soil. I ensure I only buy my potting mixes from reputable dealers and nurseries, or alternatively, I prefer to mix my own.

The second cause I’ve found for the yellow fungus or slime mold to grow is overwatering the soil. This creates a damp environment in which fungi and mold thrive.

Other causes for dog vomit mold slime are poor lighting, fertilizer, like organic fertilizer that may carry unknown diseases or organisms or that from a compost pile, and a lack of aeration in the soil.

Getting Rid of Yellow Soil Fungus

It isn’t always easy to get rid of yellow slime mold or mushrooms, but I’ll share my best tips with you.

But first, I know I don’t like the sight of yellow mushrooms popping up and growing next to my houseplants; however, they can improve the quality of your plant’s soil as they are a sign that the soil is healthy.

This being said, if the mushrooms are popping up because you are overwatering, then it may be best to get rid of them.

Here are my methods to getting rid of yellow fungus:

Method 1: Remove or Scrape It Off

The first method I’ve tried is to remove the mushrooms as they pop up and thus reducing the chances of them resporing.

With the dog vomit slime, I scrape off the top 2 inches, since mature fuligo septica only grows one inch in thickness.

I am usually extremely careful when I scrape off the mold or remove the mushrooms as I don’t want any of the spores to contaminate my soil and grow again.

Since I’m sensitive to spores, I also ensure I use gloves before touching any kind of fungi or mold.

This is one of the best and most foolproof ways to get rid of a yellow fungus or mold; however, the plant can also go into shock and die.

Firstly, I make sure that all my equipment is properly sterilized as I don’t want to introduce new diseases or fungi or spread these yellow ones. I also wipe any yellow fuzz off my plant stems and leaves with a damp cloth.

I carefully remove the plant from its container. I remove all the contaminated soil and throw it away.

This is followed by gently shaking off the soil from the plant roots and also washing the roots under a weak stream of water. If the roots show they are diseased, I prune off the sickly bits.

Then I put the new soil in the new container and transplant my plant. I water it and ensure that all the other growing conditions for my plant species are met so it can thrive, yellow fungus, and mold free.

Method 3: Use a Natural Fungicide

The other option is to use a natural fungicide. I usually mix apple cider vinegar and water and spray this on my plant and soil.

Or you can also mix dish soap, water, and neem oil, and spray this onto the soil to help get rid of the mold and fungus.

I find that I need to spray the soil several times to ensure the mold or fungus is dead and won’t return.

One other method to get rid of slime mold and yellow fungi is to get rid of the debris, or any decaying organic matter, as these are the food sources that help the mold and fungus thrive.

I ensure that I regularly remove any dead stems and leaves from my houseplants, and I take care to do this before I water.

Are there ways to rid the soil with yellow fungus?

There are a few ways to get rid of yellow mushrooms or the scrambled egg slime mold. You can remove the mushrooms as they appear or you can scoop up the mold and the top 2 inches of the plant’s soil. Other methods for eliminating yellow fungus are to use a natural fungicide, repot the plant, and remove dead stems and leaves.

Why is there yellow fungus in my soil?

The yellow fungus you see can either be dog vomit slime mold or yellow mushrooms. These appear when the soil is warm and humid because of overwatering or because the soil is contaminated with the spores that allow these organisms to grow. While they are harmless to your plant, it is best to get rid of any yellow fungus growing in your soil.

While yellow fungus, in the form of mushrooms or scrambled eggs mold, are harmless to your plant, it isn’t if your child, dog, or cat ingests it.

It is best to get rid of any yellow fungus growing on your houseplants’ soil by removing dead leaves and stems, repotting your plant, using a natural fungicide, or removing the mushrooms, or scraping off the scrambled eggs.