Creating an ideal Potting Soil Mixture for Houseplants is essential for healthy plants and strong root systems. There are multiple pre-mixed houseplant potting soil mixtures that can be store-bought or you can mix your own. Most avid indoor houseplant growers and outdoor gardeners seem to have developed their own mixture over time that works for them. Depending on your climate zone and also your indoor conditions you may need to adjust your potting soil as the humidity, the air temperature, the airflow,  the amount of available light and the water quality and watering habits vary.

We have developed our own potting soil mixture that works for us and that we would like to share with you in this article. We are going to introduce the different ingredients that are: Perlite, Coco Coir, Pumice, Spaghnum Moss, Orchid Bark and Clay Pebbles in detail and also created a handy YouTube video about our Potting Soil Mixture so you can follow along.

Please find the houseplant potting soil mix ratio we are using below. 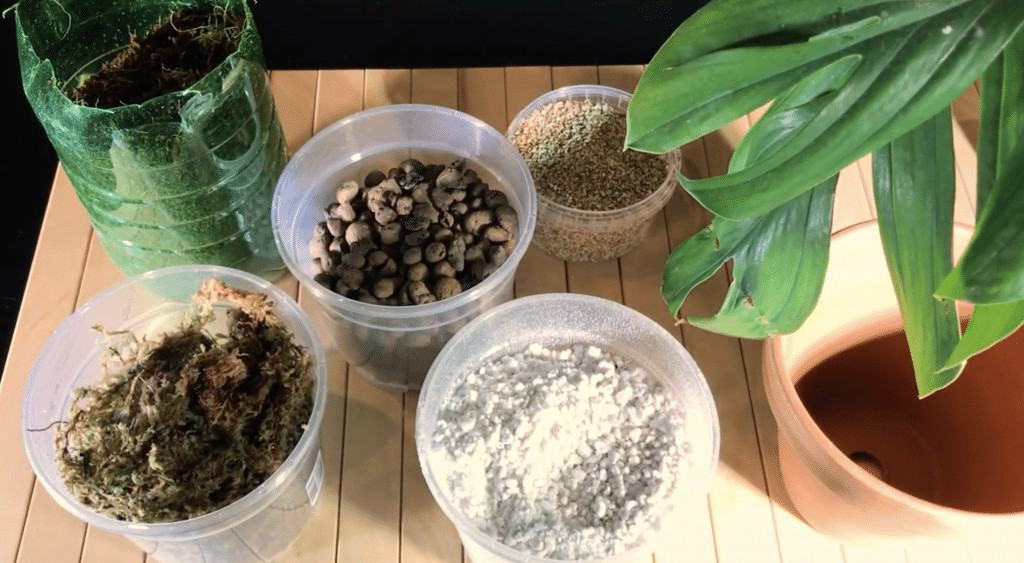 Perlite is volcanic rock that is 100% natural, sterile and pH neutral. It is heat-treated volcanic glass that expands and becomes white and is used for its lightweight and porous characteristics. In horticulture, Perlite is used as a soil additive that helps to loosen up the soil. It has a low density, absorbs little water and prevents soil from becoming too soggy and too compact. It also aerates the soil, a prerequisite for healthy roots as it creates a great balance between water and air. It is well-draining and it, therefore, prevents root rot by minimizing the risk of too soggy and too dense soil.

Perlite is appreciated all over the world and used by gardeners and indoor plant growers alike. It is an essential part of a healthy potting soil mixture for houseplants. It can be mixed with regular soil or any other potting mix components and is lightweight, odourless, simple to use and affordable. It is most commonly bought in 5, 10 or even 100-liter bags.

Coir or coconut fibre derives from the husk of coconuts and does not carry any viruses or soil diseases. It contains a mold called Trichoderma that further protects plants against soil diseases. It is very airy helping roots to access oxygen. Coco coir has great water retention abilities and a natural pH level in the range of  5.2-6.3. The ideal level for nutrients intake in plants is between 5.5 and 7 and coco coir is therefore optimal. One thing to keep in mind is that coco coir is comparable to unfertilized soil. You therefore need to add nutrients to it when used as a single medium.

As an addition to soil or a soil mix, it is a great companion due to the above-described benefits such as being airy and the beneficial pH level and its water-holding abilities.

Coco Coir used as part of an ideal Potting Mix

Pumice, as well as perlite, derive from volcanic processes. Pumice is created by molten lava that cooled. It is very porous so water can drain through it and often has a greyish colour. The name pumice is from the latin name pumex that stands for foam, as the little stones have a foam-like texture. Pumice floats in water and water itself can flow right through it. It is also sterile as is Perlite and is used for great drainage in soils. In addition, Pumice also allows air to reach the roots of plants. It contains little air bubbles and is also pH neutral. In contrast to perlite it is better suited for microbal life to inhabit it because of the sponge-like texture and the air spaces within the pebbles.

Both perlite and pumice can be used to root cuttings as they are sterile. Some growers are using only pumice or perlite for their cuttings and are very successful with it. Pumice is also lightweight although slightly heavier than perlite. It is often used for cacti and succulents.

Sphagnum Moss is used in soil for its ability to hold water and nutrients as well as its capillary abilities. You can buy Spaghnum Moss either dried or alive. In its dried form is called Peat Moss. The major difference is that whilst Spaghnum Moss is pH neutral, peat moss is acidic and contains tannins. When you buy Peat Moss it is often compressed and has to be soaked in water first before you can use it. There are more than 380 different types of Mosses that are called Spaghnum Moss and depending on the type it is able to hold between 16 to 26 times its dry weight in water. In addition, it has natural anti-bacterial and anti-fungal properties which are very beneficial for plants and roots.

Therefore Sphagnum Moss is often used to root cuttings. It also prevents cuttings from drying out using its water-absorbing and water holding abilities. What needs to be done is to put the moss in water and soak it. Afterwards, you squish it multiple times in your palm until the Sphagnum Moss is just slightly wet but not soaking wet anymore. Depending on the environment the moss stays humid but not wet for several days.

Clay Pebbles or also called Leca are brown coloured ceramic balls that can absorb water and hold nutrients and slowly release both to the plant’s roots. They are simply baked clay pellets and are often used as a medium in semi hydroponics as a sole growing medium instead of soil. They are sterile and lightweight and improve airflow to roots. An additional advantage is that they do not decompose. Clay balls or pebbles further improve aeration and drainage. They hold humidity well and slowly release it and therefore add to extra humidity that is beneficial to a lot of tropical plants. Their chunkyness creates air pockets in soil. That’s also why they are a great addition to general potting soil similar to Orchid bark that would also break up the structure of the soil and would prevent soil from being too compact. Compact soil prevents roots from having access to oxygen. A lack of access to oxygen may lead quickly to root rot.

Advantages: Hold water and nutrients, are sterile and lightweight, improve aeration and drainage

Watch our video of how we use a potting soil mixture consisting of Perlite, Coco Coir, Pumice, Spaghnum Moss and Clay Pebbles to create an ideal Houseplant Potting Soil Mixture that is well-draining, airy and retains water at the same time.