How to stop Tomato Blight the Right Way! 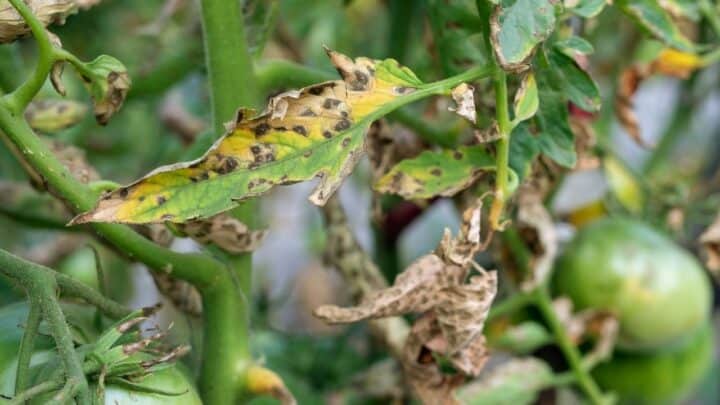 Tomato Blight is a disease caused by fungus-like organisms.

Tomato Blight spreads quickly causing the leaves to rot and discolor. Due to this, tomatoes may collapse in the end.

To avoid this disease, use a stake or cage for Tomato foliage to make it grow in a vertical position off the ground. Sow the foliage which is resistant to Blight.

Mulch well around the foliage to prevent Blight. Use a soaker hose while watering the plant.

But, how do you stop tomato blight from happening in the first place?

How to Stop Tomato Blight

To stop tomato blight, remove all the affected leaves, throw them in the garbage or burn them. Mulch around the tomato’s base to prevent fungal spores growth. Apply fungicide if blight has affected the stems of your tomato plant. Lastly, don’t reuse the soil where the infected tomatoes are planted.

After blight is properly identified, it can be restricted quickly from spreading.

The very common and important treatment is to remove the leaves affected by blight and either burn them or throw them in the garbage immediately.

To prevent fungal spores in the plant, mulch with natural mulch, straw, or wood chips around the tomato plant’s base.

If the Blight has spread on more than just leaves and affected the stems and caused broken tomatoes, then apply Daconil Fungicide (Ready to Use) as it keeps blight from causing further damage and kills fungal spores.

While planting tomatoes, be prepared to prevent Blight.

Plant tomatoes in that section of soil that has not been used for the last two years for any member of the Solanaceae Family like eggplants.

Also read seed packages and plant labels attentively and pick up the variety of tomatoes to plant which is resistant to Blight.

Cage the plant in a way that tomatoes grow vertically of the ground and mulch well around plants. Use a soaker hose while watering instead of an overhead sprinkler as this greatly reduces the water that you’ll spray on the leaves.

Inspect the plants every day in your garden for any damage. Quick diagnosis is the best possible way to keep the plants healthy.

To prevent wilting, water the plants at their base in a way that does not splash foliage.

Watering in the evening can result in tomato wilting but in the morning, it does not affect too much.

Prevent watering the top part of the plant to avoid wilting. In this way, the tomato plant will not die and stay healthy.

It is a solution to prevent fungal diseases of Blight.

To use this, take a tablespoon of baking soda because baking soda is capable of restricting the spread of Early and Late Blight.

Add a teaspoon of vegetable oil, including a small amount of mild soap and all other elements in a gallon of water. Spray the tomato plants with the solution as it will kill the fungus.

As diseases are difficult to eradicate once they are established in plants, we can still prevent them by adding protective fungicide spray.

That’s why it is recommended to plant seeds in new soil every time and avoid planting tomatoes and potatoes where you had planted them the previous year.

Tomato Blight and its Causes

Blight like all fungi is spread by spores which lead to white spots and require favorable damp conditions and warm weather to thrive.

So, in this way, Tomato Blight refers to the family of diseases caused by fungus.

The fungal infection of Tomato Blight is also named Phytophthora infestans, which means it spreads by wind and water splash.

Examination of a plant is necessary to identify the symptoms and type of blight.

Note the symptoms carefully to make positive identification of the disease as the treatment of all types of Blight is the same but symptoms vary.

Types of Blight are as follows:

If few small brown lesions appear on the bottom leaves of a tomato plant, then the symptoms of Early Blight pop up with the advent of the first fruit on the plant.

Lesions grow with target-like rings and dry, dead tissues in its center.

The surrounding tissue of the dead ring starts turning yellow in the beginning and then it turns into the brown shade and in the end, leaves die and it falls off the plant.

Early Blight causes the loss of protective foliage which indirectly causes damage to the fruit because of direct sun exposure.

In the growing season of tomato plants, this type of blight affects them any time during their growing stage.

Symptoms start to appear as the edge of leaves becomes dark and plant tissues start getting damaged from leaves leading towards the stem.

On the affected area of leaves, white mildew may grow underneath.

In humid conditions, late blight rapidly spreads and progresses through the plants.

If the late blight is left untreated, it begins to damage the plant.

Like other types, the very first symptom appears on the lower side of the leaf.

It begins after the first fruit appears on the plant. Septoria Leaf spots appear as several tiny brown spots on the leaves.

Before causing leaves to fall off, lesions continue growing and spreading.

It causes the disease to return next year more forcefully.

Frequently Asked Questions about How to Stop Tomato Blight

Can you eat tomatoes with blight?

Though quite daunting, you can eat tomatoes with Blight. You should, however, cut the affected part and eat the remaining part without worry about any health risk.

What to do About Wilting Tomato Plants? 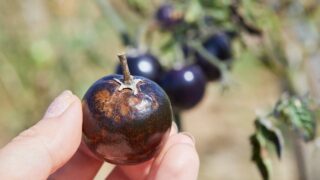 Previous
Why Are My Tomato Plants Turning Purple? OMG! 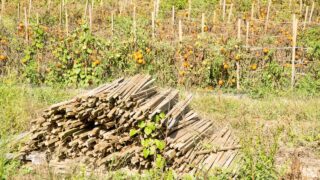 Next
How To Stake Tomato Plants The Pro Gardener Way!