Veteran gardeners and plant enthusiasts know that the goji berry is a plant native to China. They are part of the Lycium genus of fruiting shrubs, which now have variated cultivars around the globe.

Nearly all will grow in any climate, but there are a few that need specific growing conditions. The clue is usually in the name.

Most descriptions tell you that goji berry plants produce bright red berries. That’s true for commercial varieties such as the Crimson Star, Big Lifeberry, Sweet Lifeberry, and the Phoenix Tears.

Others such as the Black Goji Berry produce, well… blackberries.

Read on to discover the types of goji berries to originate in China, then change as they spread around the world.

The African boxthorn is found across Africa and in parts of Australia where it’s considered a weed. The Australian boxthorn is smaller. In drier climates, the Arizona Desert-Thorn and the Pale Desert-Thorn establish better in gardens. The rarest variety is the black goji berry shrub.

5 Goji Berry Varieties Found in Different Parts of the Globe 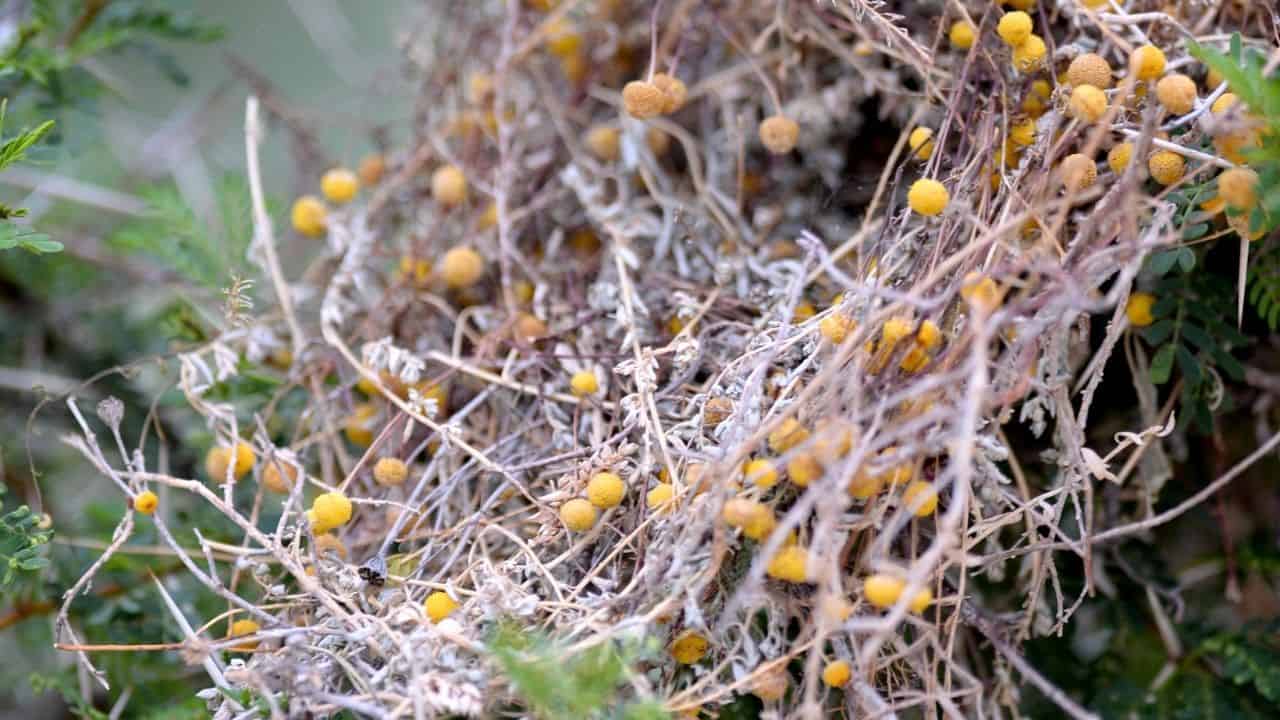 The Botanical name “forocissimum” is derived from the Latin word meaning “ferocious” which is a reference to the spikes on the branches found on all boxthorns.

These are mostly found throughout Africa, hence the name African boxthorn.

Grown as a fruiting plant in Africa, these are considered a noxious weed in Australia that’s better suited as a fencing shrub.

Each shrub can reach heights of 9.8 feet (3 meters) tall and wide.

Stems and spines grow up to 15 centimeters in length with multiple nodes.

Each node produces 5 to 12 oval-shaped bright green leaves that are up to 4 centimeters long.

Within each cluster of leaves, 5 petal flowers emerge that are a similar shape to the Double Begonia but with purple or white flowers.

Fruits emerge in the summer and are miniature in size.

The berries start off green, turning orange as they ripen, then turn a bright red when fully mature.

Much like the fruits from a Monstera Deliciosa, only the fully mature ones are edible. 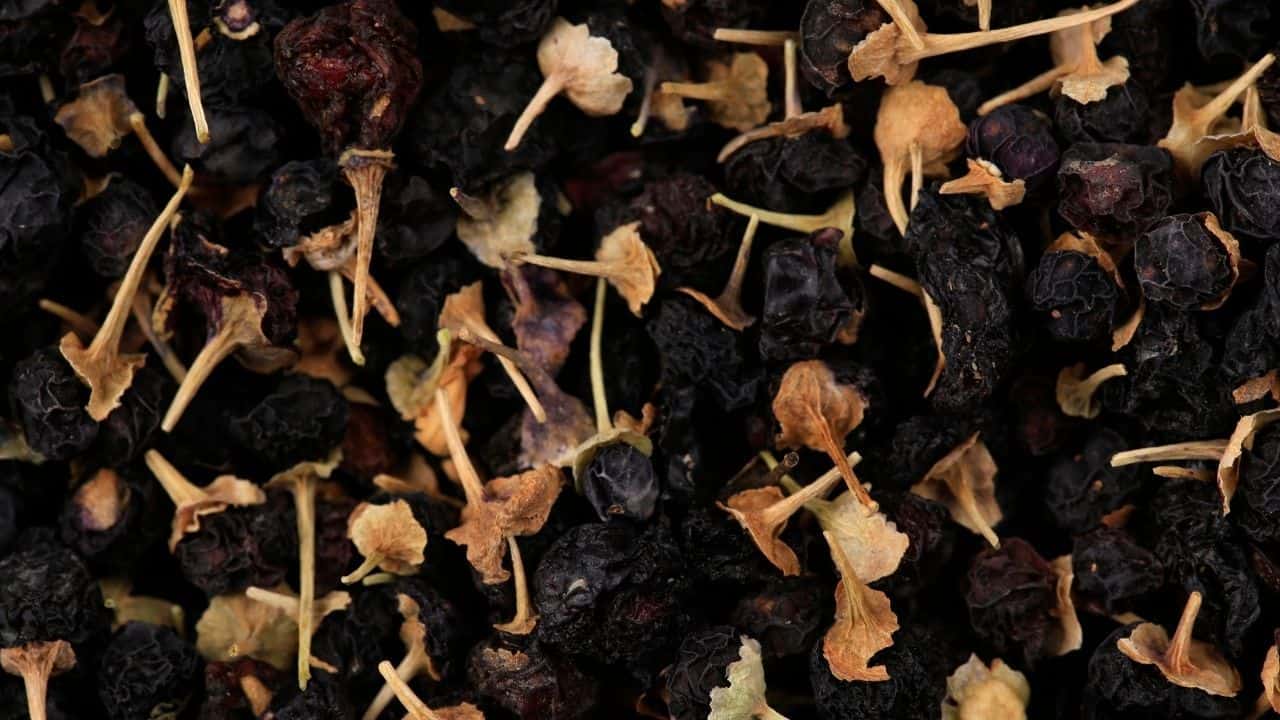 The black goji berry shrub is one of the rarest varieties. These are grown as fruiting shrubs that reach heights of 4 to 6 feet.

They are native to the Northern Himalayas, but they are becoming more popular around the globe as more gardeners are expressing an interest in growing black wolfberry shrubs.

The other name this goes by is the Russian Wolfberry.

The fruits are said to be sweeter than the traditional red goji berry and they have more nutritional value due to their higher OPC (oligomeric proanthocyanidins) concentrations in the fruits.

The leaves, stems, and spines on black goji berry plants aren’t as large as most other goji berry varieties.

Leaves are a paler green and fruits emerge in the summer, starting out as green berries, turning purple, then black when fully mature.

The Lycium ruthinicum grows mainly in the wild in the Tibetan Plateau, also known as the ‘roof of the world’ with a 3-mile above sea level elevation, making the growing conditions extremely unique.

Because of their uniqueness, and high nutritional value, black goji berries sell at up to ten times the price of red goji berries.

The Australian boxthorn is a close relative to the African boxthorn.

In Australia though, the African variety is considered a weed. The L. Australe isn’t and it favors the drier climate, fine sand, and clay-rich soil.

The berries from this are half the size of the African boxthorn but the seeds are bigger (up to 2 millimeters), and it produces a lot more seeds.

Fruits are a dull yellow to a dull orange and don’t turn red, but they are still edible fruits.

The leaves are greyish-green, around 1 inch (2.5 centimeters) thick, helping it maintain moisture in the arid conditions, which is where it most differs from its African counterpart.

This is a type of goji berry you’d find in the wild in Australia, but gardeners wouldn’t go out their way to grow one because this has the smallest fruits of all goji berry varieties.

The L. Australe belongs in the wild for wildlife to feast on the seeds and fruits.

This is a dense shrub that can grow to a height of 12 feet. It produces an abundance of green leaves no larger than 2 centimeters that are covered in minuscule white hairs.

Lilac flowers emerge in the spring, then in the summer, it starts producing small berries that are a rich red when fully mature.

This variety gets its name because it’s only found in Arizona, USA.

It’s rare elsewhere in the United States, being more common in the northern part of Mexico. 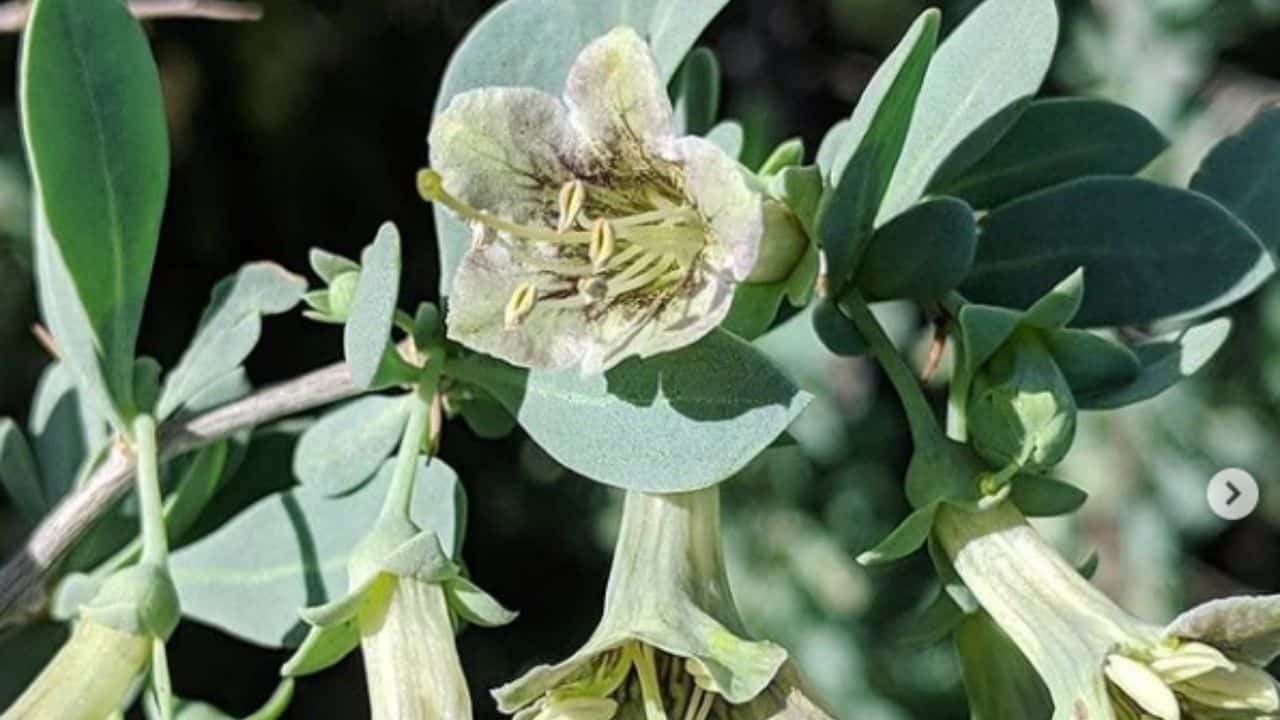 It grows in the same climate but to half the size, and produces similar lilac flowers up to an inch in diameter.

The leaves are hairless though, and the berries it produces are a duller shade of red than the Arizona Desert-Thorn, hence the name “Pale”.

What’s the difference between Lycium Chinense and Lycium Barbarum?

Lycium Barbarum has two-lobed petals, Chinense are five-lobed. The barburum genus is the one that produces edible fruits. The packaged dried goji berries are from the barbarum genus. The Chinense produces bigger leaves, which are edible and (some) can be used in soups, stir fry dishes, and herbal teas.

Are goji berries and wolfberries the same?

Though there is one goji berry variety that bears the “wolfberry” name, technically, they’re a lot different than you think. The names are often used interchangeably, but these two plants are different. Wolfberry shrubs are from the Lycium Chinense genus that produces sour tasting berries. The sweet-tasting berries are the bright red goji berry from the Lycium barbarum genus.