Ponytail Palm Diseases and the Pests that Cause Them 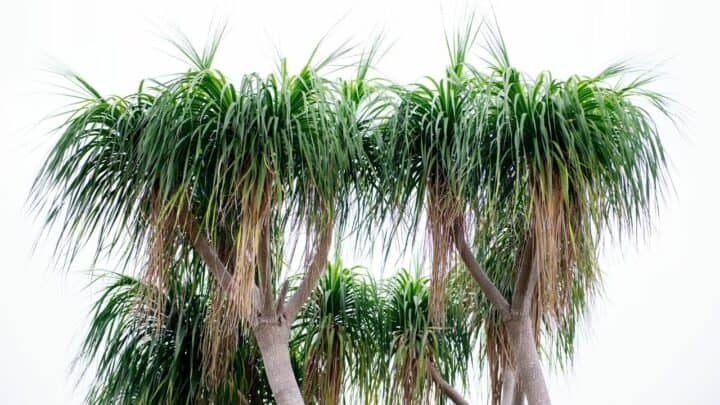 The Beaucarnea recurvata is an extremely slow grower. Anything hindering its growth can be fatal.

The good news is that there are only a few Ponytail Palm ailments to watch out for.

Timeliness is everything though because once the plant gets the disease, the consequences will be dire.

Ponytail Palm diseases are rare, but when they surface, they’re often fatal. Caring for these for the long haul needs a watchful eye for signs of disease.

So, let’s take a look at some of these known diseases that affect Ponytail Palms and find out how best we can treat them.

A few of the most susceptible Ponytail Palm diseases include stem or root rot, sooty mold, and botrytis blight. Most of the diseases that affect the Beaucarnea recurvata plant start with a pest infestation. Common pests are scale insects, mealybugs, spider mites, aphids, thrips, and other leaf chewing insects that excrete a honeydew-like substance. The sticky substance coating the leaves is what fungus spores stick to, cover the foliage, deprive it of light, resulting in insufficient chlorophyll production which slows photosynthesis.

Any damage to the delicate roots of a Ponytail Palm hinders nutrient delivery.

The first sign that the plant’s roots aren’t soaking in enough nutrients is yellowing leaves. Yellowing and wilting of the leaves are a sign of excess watering that’s causing the roots to rot.

As most gardeners know, root rot is the most common problem that kills a Ponytail Palm.

Thus, the soil needs to dry between watering. Failing to do that reduces the pockets of oxygen in the soil, resulting in slow suffocation that eventually causes the roots to rot.

Left unchecked while continuing to irrigate your Ponytail Palm, the trunk will eventually go mushy as more of the roots rot.

If there is enough damage to the roots, the plant will never be able to recover.

Indoors, you can repot a Ponytail Palm in dry soil to try to nurse it back to health.

Outdoor-grown Beaucarnea recurvata plants are unlikely to recover from root rot because it’s much harder to relocate it to a suitable growing location.

If the root rot doesn’t kill it, the transplant shock from moving an already stressed Ponytail Palm will surely see it off.

Mealybugs need to be treated promptly because colonies emerge rapidly.

Established colonies can develop wings, take flight, and fly to other plants.

These are similar to spider mites in the sense that they excrete a honeydew-like residue. Treatment is very much different from getting rid of spider mites though.

Adult mealybugs have a protective layer of wax shielding them from insecticide solutions.

On most houseplants, a steady stream of water can hose these pests off the leaves. But the risk with Ponytail Palms is that it’s likely to lead to overwatering.

Thus, a cotton swab dipped in 70% rubbing alcohol (isopropyl alcohol) is your best defense. Test it on a healthy leaf first though because it can cause leaf burn.

So long as the solution doesn’t burn the foliage, it will be effective at killing the mealybugs and dislodging them so you can remove them.

Use rubbing alcohol to kill the adult mealybugs, then wash the foliage with an insecticidal soap to kill small nymphs on contact.

When eggs of mealybugs hatch, nymphs emerge. These are weak crawlers that don’t have a protective wax coating yet.

The protective layer emerges as they mature. To prevent nymphs from reaching the adult stage, repeated applications of insecticidal soap need to be done for at least one month.

Even then, the damage may be too severe for a Ponytail Palm to recover.

The sooty mold is a sticky black fungus that attaches to insect excrements.

Sooty mold is not an infection that directly damages the plant. The indirect damage is the lack of sunlight reaching the leaf pores.

Left untreated, Ponytail Palms can die from this. The only way the plant can recover is by correcting two problems.

The first is getting rid of the problem insects. The second is removing the fungus.

Removing the fungus is the tricky part because these embed deeply into the foliage.

An effective way to treat the two problems at once is to douse the leaves with insecticidal soap, then leave it to soak for a few hours while the mold softens.

The insecticidal soap can treat the insect infestation, and leaving the fungus damp helps soften the fungi so you can scrape it off.

Depending on how much foliage is covered in the fungus, some fronds may need to be removed. However, aim to trim no more than 20% of the leafage in one go.

If it’s only partial, use a blunt knife to scrape the fungus off, rather than trim the leaves off a Ponytail Palm.

If the insect that’s damaging the plant is any type of hard body-scaled insect similar to mealybugs with protective coatings, use rubbing alcohol to kill them.

Botrytis blight (also known as a gray mold) is a fungus infection.

It looks like a dusting of gray mold spores that gradually cover the leaves. Eventually, brown lesions become visible. It is rare on Ponytail Palms because they’re not indoor flowering plants, and they’re usually not kept in high humidity.

The spores of botrytis blight only germinate when temperatures are between 45 and 60 degrees Fahrenheit, and humidity is in the extreme range (over 93%).

The fungal spores spread from one plant to the other, through water droplets, and through the wind in outdoor environments.

Despite being rare on indoor Ponytail Palms, gray mold can be a problem, particularly on those with yellowing leaves already weakened by improper watering or over-fertilizing.

With that said, the spores of Botrytis blight rarely penetrate healthy green foliage.  Damaged leaves are the most susceptible to fungal infestations.

That’s why you should never cut directly through the soft tissue of yellow leaves.

Instead, make clean cuts with sharp scissors on the healthy parts of the leaf where it’s most likely to heal easier.

This is most likely to occur is when there are higher concentrated humidity levels, such as growing groupings of tropical plants with an abundance of foliage close together.

This arrangement will ultimately reduce the airflow to them, making them more susceptible to the said infestation.

Can a Ponytail Palm recover from root rot?

Depending on the extent of the damage, it is possible. When repotting, trim off most of the rotted roots with a sharp knife or scissors before replacing them in a dry potting mix. Save as many of the dry roots as possible. Once repotted, give the plant around one week in dry soil before adding water. It is drought tolerant and will appreciate roots drying out in new soil.

Should I remove the leaves on a Ponytail Palm that has fungus infections?

Ponytail palms are slow growers and usually won’t tolerate more than 20% of their leaves being trimmed in one go.  Most fungi are just spores attached to the foliage. The most damage is being done because of a lack of sunlight. Removing the fungus allows light to reach the leaves, resulting in increased chlorophyll production. The increase in chlorophyll production ultimately helps the plant heal itself.

Previous
Why is My Ponytail Palm Dying? How to Recover!