There are only a few plants that are easier to grow than the ever-popular world-renowned herb, basil.

What’s rarely known until experienced first-hand, though, is that basil is very susceptible to root rot.

Root rot can become a recurring problem. There’s a sneaky fungus that lays dormant in soil, then strikes on weak plants that lack the structural support to fend off fungi.

Find out what that is, how it happens, what it does, and the fixes you can use to identify, treat, and prevent basil root rot from destroying your plants.

Overwatering basil or using a potting mix with insufficient drainage causes root rot. Fusarium wilt is a soil-borne fungus that once in the stem, stops water traveling through the plant. Early signs are leaf discoloration, wilting, leaves curling, drooping, leaf drop, and the stem twisting.

There are only two main causes of basil root rot. Overwatering and a fungal infection.

Overwatering can be caused by using a potting mix that doesn’t drain fast enough, leading to moisture being retained for too long.

The second, and most destructive type of root rot on basil plants is fusarium wilt. This is a common cause of stem rot on all plants in the mint family.

Over-saturated soil is fairly easy to fix. Take the plant from its pot, and use a pair of sterile scissors to cut away brown roots.

Healthy roots on a basil plant are white.

To keep a basil plant alive, cut away all the dead and dying roots. Divide the rest of the plant into separate plants, then repot each into 4-inch containers, each filled with a well-draining potting mix.

If you plan to grow basil outdoors, in the garden, or even a raised garden bed on a sunny balcony, space them with one foot between each basil plant in soil. Otherwise, they’ll compete for the nutrients with no clear winner. They’ll all struggle.

Something else you need to know for outdoor growing is you need to rotate your crops every year.

Fusarium wilt is an invasive fungus that often infects basil from seed. It doesn’t stop it growing, but it will eventually stunt growth, then kill it, rendering your efforts wasted.

What often happens with infected basil plants is they grow fine up to six to twelve inches, then BAM – suddenly you see your basil wilting, drooping, yellowing or even browning of the leaves, and leaf drop of older basil leaves.

In severe cases, the stems of your basil plant can twist. The term for that is “shepherd’s crook” and it’s a definitive sign of root rot caused by fusarium wilt.

Worse yet is that the fungus can overwinter in soil. Plants that show signs of fusarium wilt shouldn’t be composted. Doing so will spread the fungi to another part of your garden.

Spreading the fungi into another location is the worst thing that can happen.

Once it’s in the soil, it can linger for 8 to 10 years, rendering that patch of soil unsuitable for planting basil, or any member of the mint family, or solanaceous plants, including tomatoes, eggplants, and taters.

Each are susceptible to stem rot caused by various strains of fusarium.

The most susceptible type of basil at risk of fusarium is sweet basil. Even more so if you plant in the same spot without rotating your crops.

The fungus gets into the soft vascular tissue from the roots, travels through the stem, into the leaves, and eventually blocks the xylem vessels, cutting off water supply.

When the vascular tissue gets blocked, that’s when you see the sudden discoloration, wilting, basil leaves curling, and eventually browning, leaves dropping, and stems twisting.

The plant’s effectively done for.

There’s no saving a basil plant infected with fusarium wilt. All you can do is limit the damage to that one patch of soil by trashing the plant. Never compost it.

How to prevent basil root rot

The best prevention against root rot is knowing how often to water basil.

For basil grown indoors, water every other day or every three days. For garden-grown basil, add a little water once weekly, only if there’s been little rainfall.

Overwatering causes the soil to be moist for too long. The same will happen if the soil doesn’t dry out between watering.

Finger test the soil to see if actually needs it.

When the soil is continuously damp, it will encourage fungal spores to develop. That’s why fusarium wilt is often referred to as ‘damping off’. It’s a term that reflects that the damp and warm conditions that encourage spores to thrive.

The only prevention there is from fungal diseases is crop rotation, and whenever there are signs of fusarium in soil, not using that patch of soil for any soft-stemmed plants.

In particular, plants from the mint family or the solanaceous family.

When you come across an invasive fungus in your garden soil, it takes hundreds of plants off the table, rendering the soil patch useless.

Reclaiming the soil isn’t as straightforward as applying a fungicide and taking your chances. Chances are, the fusarium fungi will return to fight another battle.

Your best chance of reclaiming infected land is a full-on heat assault using the power of solar energy.

The fusarium fungus thrives in moist soil when temperatures are around 80-degrees Fahrenheit. (approx. 27-degrees Celsius).

Depending on the amount of sunlight and the type of material used, it’s possible to increase soil temperatures to between 95-Fahrenheit and 140-Fahrenheit.

A black tarp over the soil attracts and traps heat beneath the surface, increasing the soil temperature to the extremes that kills the fungus.

Is it worth saving a basil plant with root rot?

A single plant probably isn’t worth saving, but a patch of land will need to be treated. If it’s a soil problem that’s causing the roots to rot, if you don’t treat the soil, root rot’s likely to impact your next crops, too.

Can a basil plant with root rot be propagated?

Provided you catch the root rot before the plant is too far gone, you can start new plants from stem cuttings. You’d need 4 to 6 inches of a healthy stem with the leaves on the lower third removed. Depending on your growing climate, roots can emerge within two to four weeks. 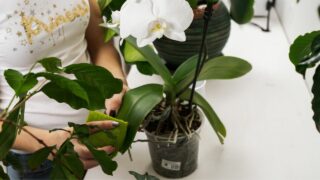 Next
How to Clean Orchid Leaves The Right Way