attracts many insects and produces some aromatic flowers, then the dwarf butterfly bush should be your choice.

make it a must-have for all plant-growers to add some magnificent variety to your garden.

Its botanical name is Buddleia davidii or Buddleja. It originated in China and is now widely available in a variety of other nations.

It is easy to plant indoors because of its small height and not-so-great responsibilities.

It takes up little space and also purifies the air indoors.

However, if you don’t have ample living room, you can conveniently grow this variety outdoors with little to worry.

Even in the category of Dwarf butterfly bushes,  you will find several varieties, each having its properties.

How to Grow and Care for Dwarf Butterfly Bush

Dwarf Butterfly Bush is one of those plants that come from the butterfly bush family and is a perennial plant, meaning that it lives for two years or more. As the name suggests, this plant is dwarf and attains only a maximum height of about 1 meter. This plant grows in a sunny area with intensely well-drained soil. Like many of the butterfly bush varieties, it also has a habit of turning inward or forming an arch with its leaves and flowers. It blooms for an extended period in the spring and fall seasons, after which it dies in winter due to frost. 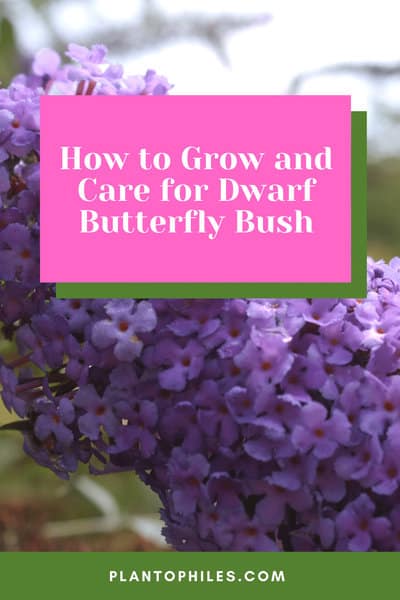 How to Grow and Care for Dwarf Butterfly Bush

How to Grow a Dwarf Butterfly Bush

As this plant is very much vulnerable to root rot, you need to make sure at all times that the water does not stay for long in the soil.

Moreover, it would help if you also dug the ground if you are planting directly in the earth so that the soil loosens up.

You can reduce the amount of soil in the pot where you are about to plant and add some compost.

However, if you are using a planting pot, it should have ample drainage holes in it.

They should be wide and large enough to drain the water as the plant is watered frequently. 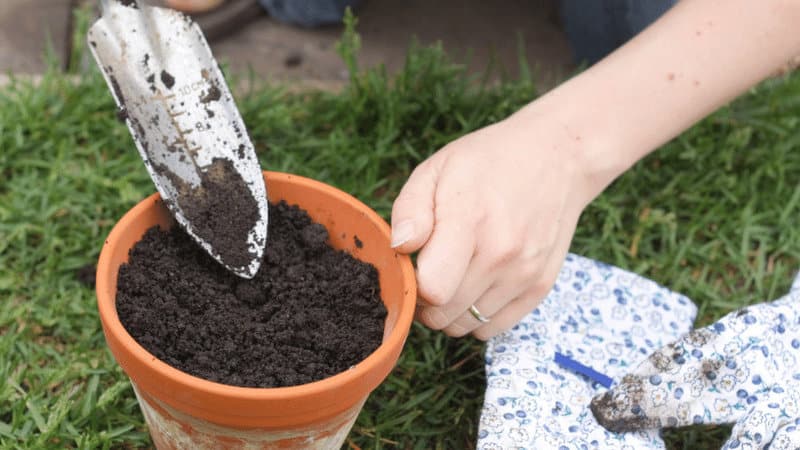 Whether you are planting the dwarf butterfly bush variety indoors or outdoors,

there should always be enough exposure to direct sunlight for the plant. If you are planting it indoors,

put it inside the window or near the window where it can get loads of sunlight each day. However, if you are growing it outdoors,

put it in a spot that is not shadowed by other plants so that your plant can get at least 8 hours of direct sunlight every day. 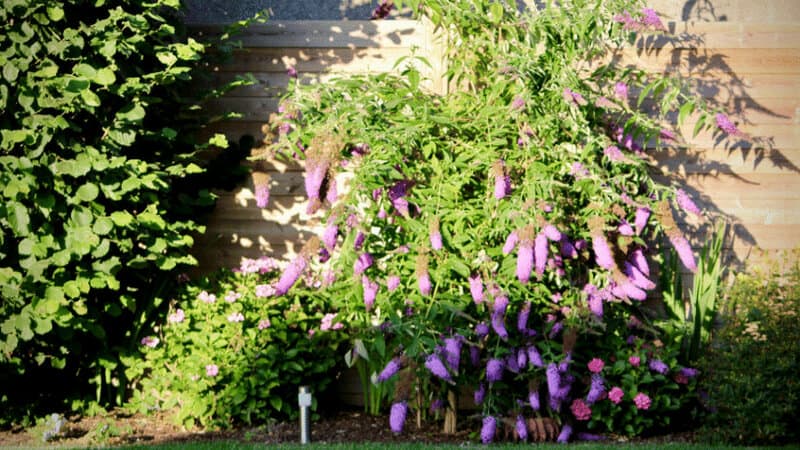 Because watering in excess can lead to rotten roots, keeping a check on the potting soil is a must before watering the plant.

In general, you can water the plant once a day and more if it is blooming in spring and fall.

Make sure that you hold back on the water on the days when there is a forecast of rain.

There is a high chance that roots will be rotten if the plant gets excess water.

Moreover, if you are growing the plant outdoors and realize that it has been raining a lot,

it is best to move it indoors for a few days so that the chances of root rot can be minimized.

Watering in winters is significantly decreased due to lack of sunlight and lesser evaporation of the water vapors. 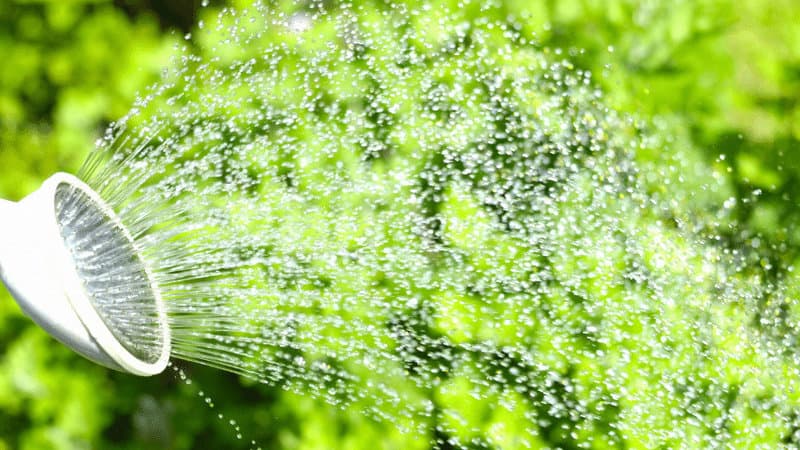 The best temperature for the optimum growth of Dwarf Butterfly Bush is the USDA growing zones of 5 to 9.

If you live in temperatures below 20 degrees Fahrenheit (-6 degrees Celsius),

it is best to move the plant indoors to prevent stunted growth due to the absence of a warm climate.

This plant loves a higher level of humidity; therefore, it can be a good idea to mist it every once in a while.

If you are growing the plant indoors, it is best to use a pebble tray under the pot so that optimum levels of humidity can be ensured for the plant.

The butterfly bush is frequently thought to be an invasive species

Therefore, fertilizing it is not recommended because it already grows at a rapid rate, and fertilizing it even further could have disastrous effects.

However, you can fill the soil with a small amount of compost in each season so that the soil remains nourished at all times. 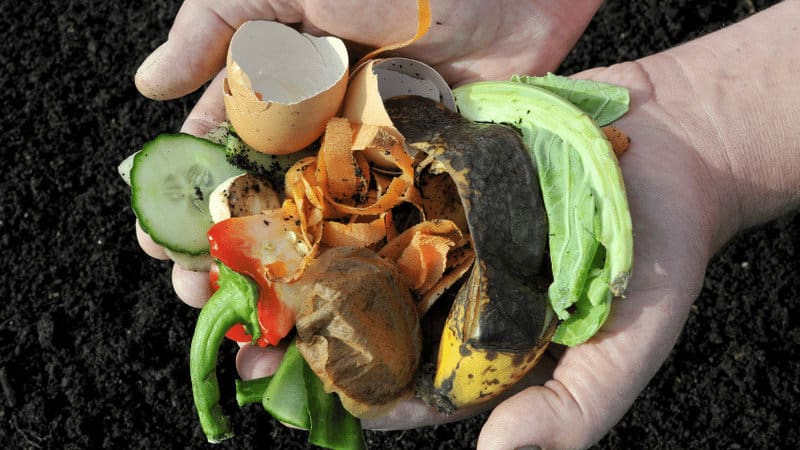 You may propagate Dwarf Butterfly Bush in a few different methods. One method to do it is through seeds.

All you have to do is sow seeds in the soil and water them well for a few days until the stems begin to sprout.

After that, check the soil for moisture before watering the plant.

The second way for the propagation of this plant is by using branch cuttings of a newly developed plant.

Take a branch at least six inches long and place it for a few hours in a solid rooting hormone, which is often available in the form of a liquid.

Afterward, plant the branch in nourished soil, and allow it to grow in exposure to full sun.

It is always recommended not to propagate this plant in the fall, as it will not get enough time to establish itself and become strong.

Because there is no proper sunlight in winter and considering that this plant thrives in full sun,

planting it in fall will turn out to be a wrong decision because the plant will not be able to tolerate the extreme temperatures of the cold season.

Therefore, if you want to start growing it, do it early in spring so that it has enough time to build some resistance against the cold.

Because this plant is a rapid grower, it is essential to prune it at least once a year in spring to prevent its invasiveness.

As the plant dies every winter and its growth remains unaffected,

you will have to cut down the previous growth to encourage new growth.

Moreover, you will also need to deadhead old flowers if you want to promote blooming in spring.

The most common problem to expect when growing a dwarf butterfly bush is the presence of caterpillars.

They will ultimately make their way to Butterfly Bush because it attracts them so strongly.

However, they do little damage to the plant, and therefore, there is usually nothing to worry about them.

However, if you notice small holes inside the leaves of the plant,

it could be time to catch the caterpillars and spray the plant with a slow-release insecticide. 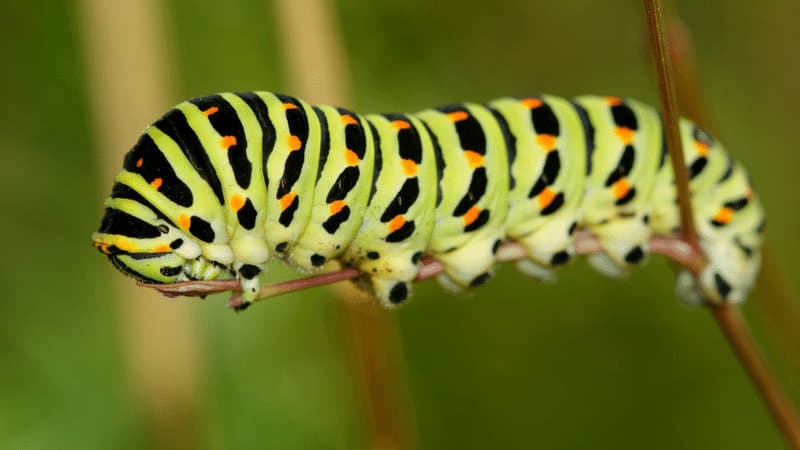 Root rot is yet another common problem when taking care of a dwarf butterfly bush.

Most commonly, the reason behind a rotten root is over-watered soil.

Since this plant never likes water over what it direly needs, it will quickly result in rotten roots.

Having said that, you will notice the symptoms at an early stage, after which you can take action to prevent further damage.

Common symptoms that may be indicating root rot are yellowing of the edges of leaves and twigs and discontinuation of the growth of the stem.

Immediately hold back the quantity of water you are providing to the plant each day,

and you should be able to see the positive changes within a few days. 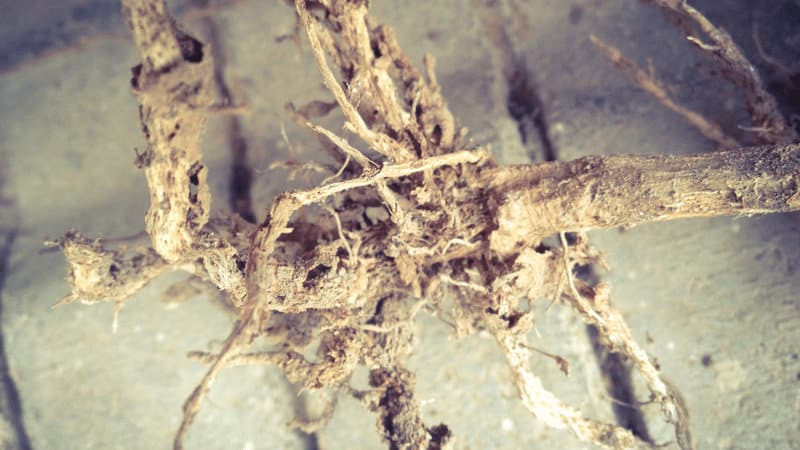 Japanese beetles are tiny insects that like to feed on various butterfly bush plants. It spreads like wildfire after maturity and,

therefore, can be extremely dangerous for not only the plant in question but also many other plants surrounding it.

The even worse news is that if you try to treat the plant with an insecticide after the beetles have grown, it will be ineffective.

Due to this reason, it is essential to keep a close eye on your plant for the presence of such insects.

Even though the insecticide will not be effective in reducing the growth of Japanese beetles,

it will still be enough to repel those insects which are beneficial for the plant, such as hummingbirds.

This makes it a lose-lose situation to use insecticide when the beetles have grown.

Therefore, the ideal solution is to look out for grubs, which are tiny larva that will eventually grow to be Japanese beetles.

Whenever you see one, it is best to handpick right at that instant.

Moreover, the insecticide can also be mildly helpful in the prevention of grubs. 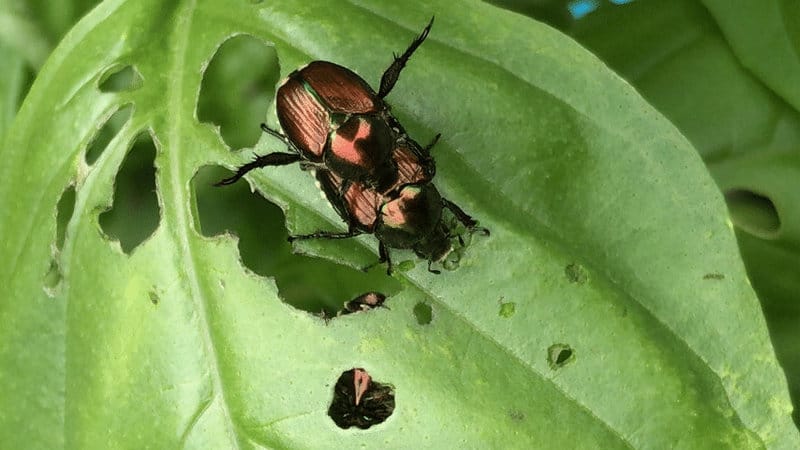 How do you deadhead a butterfly bush?

To deadhead a butterfly bush, you will need clean and sterilized scissors,

using which you will simply cut the flowers that have reached maturity or are turning brown.

Make sure that you cut the stem by one-third of its length so that it still has enough room to grow again in the next season.

Is it possible to pot a butterfly bush?

You can always plant a butterfly bush in a contained space, such as a planting pot.

However, you will need to make sure that the soil is never too wet since this plant does not like excess water.

It is advised to use a pot with ample drainage holes at the bottom so that the water does not stay for long inside the soil before making its way out.

When does a dwarf butterfly bush bloom?

The butterfly bush is known to bloom for a relatively long time, unlike many other plants that complete their blooming period within a month or two.

However, butterfly bush starts to bloom in early summer and continues to develop flowers until late fall.

The blooming period of butterfly bush may also vary according to the temperature and location in which the plant is grown.

Why is my butterfly bush shriveled?

There can be two reasons why your dwarf butterfly bush appears to be shriveled, and you will have to spend some time diagnosing the problem correctly.

If your plant seems shriveled and is turning brown, it is probably because of a lack of water.

This is common in hotter climates. However, if the butterfly bush is shriveled and seems to be green in color,

it is because of the toxicity of herbicides used in the plant’s surroundings.

Will my butterfly bush come back every year?

The butterfly bush is a perennial plant, meaning it will thrive for at least two years.

However, in winter, this plant dies due to frost and regrows again in the months of early spring.

It is best to prune them in late fall to maximize the chances of regrowth of the plant.

Is it dangerous if I plant dwarf butterfly bush?

It is entirely safe to plant dwarf butterfly bushes in a setting where children or pets live. This plant is not toxic if ingested.

Because Dwarf Butterfly Bush is a rapid grower, its growth may be lethal in some cases, which makes its regular maintenance very essential.

Apart from this limitation, it is an excellent plant, owing to its beneficial characteristics, such as attracting hummingbirds,

being drought-tolerant, air purification, and not being toxic to pets or children.