Skip to Content
Succulents are often sought out as houseplants for their easy care, and fun morphology. The Donkey’s Tail, also Burro’s Tail or Sedum morganianum (botanical name), is an ideal addition for its iconic leaves.

Belonging to the family Crassulaceae, this individual sports fleshy, modified leaves. And as you would assume, this foliage grows in a bottlebrush style, similar to that of a donkey’s tail.

These perennials are naturally found in areas extending from the southern tip of Mexico, all the way to Honduras. In fact, this species is considered to be a “micro endemic” species that allude to their heavily restricted range.

This habitat includes steep cliffs lined with rocks. These succulents can handle a myriad of conditions, including your home. Many consider them to be a rather easy to succulent to care for, even with slightly sensitive burro-like leaves. 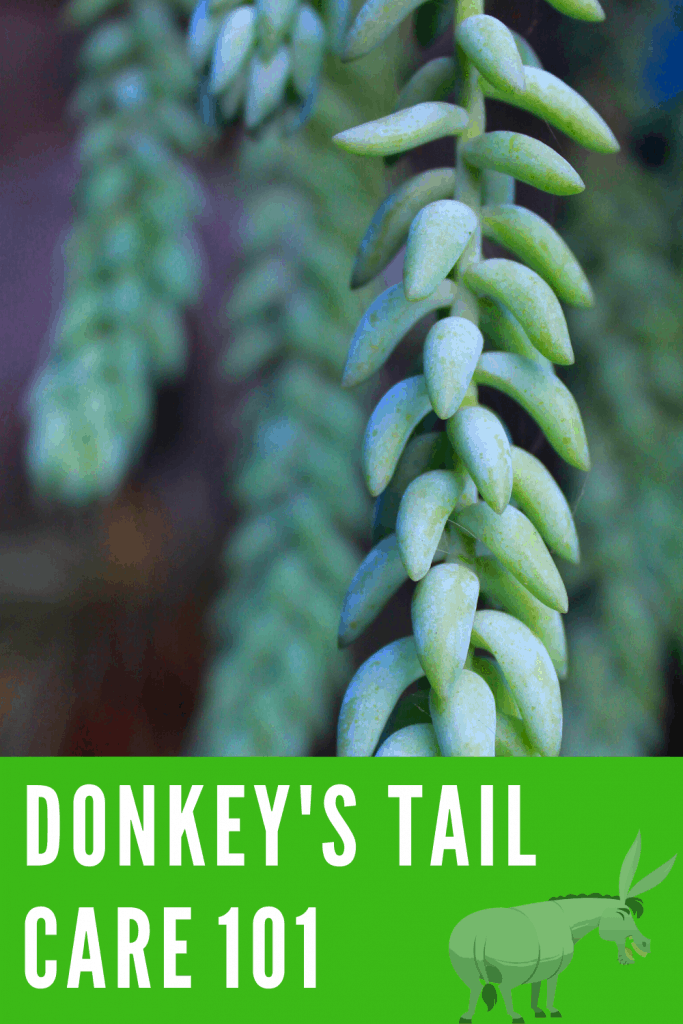 You may have heard this plant be referred to as the lamb, donkey, or horse’s tail. Either way, it is relatively simple in terms of overall care.

This is especially true if you choose to raise it indoors. Most plant enthusiasts will even recommend this flora to a novice, which hints at its laid-back care.

The most important factor to consider when choosing a soil for your succulent is that they prefer one that drains especially well. The typical potting soil does not achieve this level of porous qualities.

You’ll want to invest in a potting mix that has desert plants in mind. This can include ones designed for cacti and succulents.

These generally have higher levels of sand, perlite, and pumice than a regular potting mix. Gritty soil will prevent the water from sitting for too long.

We have an article about the Yucca that also requires a properly draining soil!

Perhaps the most important requirement for Sedum morganianum is the amount of light that it receives in a day. On the lower end, your Donkey’s Tail plant should get at least four hours of high light.

But, what do we mean by “high” light? Most would assume this to be direct sunlight. That’s where houseplant owners get into trouble. Direct light can burn the foliage, even for sun-hungry succulents like Sedum.

Instead, try to put your plant in a spot that gets four hours of bright, indirect light exposure. Opting for a location such as on a windowsill, patio, or balcony.

Regardless of where you’ll put your Donkey’s Tail, be sure that it gets the minimum requirement of four hours.

Being a succulent, you might make the assumption that they rarely need water. This is surprisingly false. Those fleshy rows of leaves that take on the shape of an equid’s tail actually rely on a good amount of hydration to stay alive.

Depending on the conditions of your home, you likely should expect to water your Sedum every few weeks. This can also shift based on the time of year.

There should be enough water to fully saturate the plant down to the roots. Still concerned about the watering details? Don’t fret! We’ll discuss this briefly later on.

Being native to the southern regions of Mexico, it’s no surprise that warmer temperatures produce a healthier individual. The ideal range is between 18 and 24 degrees Celsius, so only slightly warmer than the typical household.

As long as your place does not creep below 10 degrees Celsius, you should be fine. Handling the heat? No problem.

Freezing temperatures are a completely different story. Raising your Sedum morganianum indoors gives you an advantage. Just don’t place it next to an open window during the colder months!

The amount of humidity that you’d find in most homes is enough to keep a Donkey’s Tail succulent from wilting away. The average humidity found in Veracruz, where these plants naturally exist, is about 85 percent.

You don’t need to obtain this level of moisture in the air, but you can if you’re unsure about the state of the leaves. Misting is among the more commonly used techniques.

You can also opt to place your plant in a room with naturally higher humidity such as the bathroom. Just keep in mind that too much water can cause root rot, even when in the form of misting.

One of the biggest questions that people have when it comes to the care of a plant is if it needs fertilizer. Some do, especially those who produce large, decorative flowers!

The Donkey’s Tail plant has flowers, but they are anything but flashy. For this reason, these succulents aren’t entirely dependent on fertilizer to bloom. If you want to implement food, it’s best to limit it to the growing season.

This should not be done more than once a month. Sedum morganianum does best when given weak solutions that are specifically designed for desert plants. When in doubt, we suggest opting out of using fertilizer.

Succulents are known for being propagated without any problems! This is mainly due to the fact that they root rather easily.

The Donkey’s Tail plant can even be copied through dropped leaves that you tend to for a few days. You can either proceed with this method, or opt for the more typical stem cutting.

The method simply depends on how much of a new plant you want. Using the leaves that drop simply adorn your already existing plant and make it fuller. Stem cuttings will bring about a whole new individual.

Compared to most other houseplants, you’ll be surprised to find that your Sedum will take a while to fully mature. They grow in pendant patter, where the leaves trail down.

This makes them an ideal candidate for hanging baskets. The leaves can be up to 60 centimeters in length. The flowers, as we’ve mentioned before, are quite small. They are only a few inches in total.

The whole plant, though rare, can be around four feet long. This takes quite a while, as they are incredibly slow at growing. Sedum morganianum will generally reach its full potential at around six years.

The process of repotting can be a bit risky for this succulent. Those fleshy leaves are actually quite fragile, easily falling off of the plant whenever they are handled too much.

If you can get by not really touching your Donkey’s Tail, then you might have a healthier succulent. Fortunately, these plants don’t require frequent repotting.

Unlike other flora, they actually prefer to let their roots become bound within a small container. Most houseplants will face the consequences with cramped roots.

The only time that you will likely need to repot your Donkey’s Tail is if it is experiencing some disease and needs a fresh batch of soil. 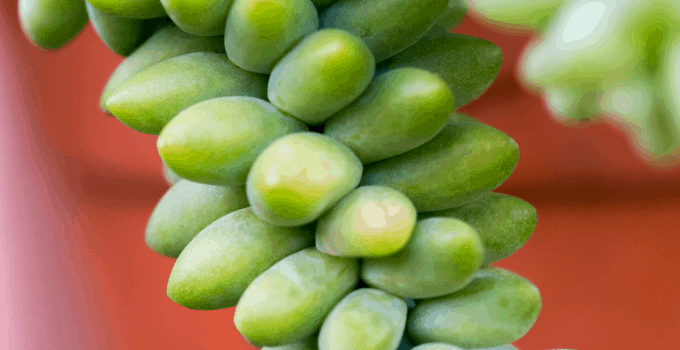 You may recall us say earlier on that the Donkey’s Tail is a fan of water. This makes it quite a bit easier to care for them. Do keep in mind that there is such a thing as too much water. This would cause the stems to eventually rot. So then, how much is too much without drying out your succulent?

Consider watering your Sedum morganianum every few weeks or so. This depends on a number of factors such as the humidity, temperature, and sun exposure that your plant receives.

The typical Donkey’s Tail plant should be given moisture between ten and fourteen days. This watering routine includes a thorough watering enough to saturate the roots.

To avoid root rot, make sure that there plenty of drainage holes on the bottom of the pot.

As with most succulents, making new individuals is rather easy, especially when you consider the process involved in copying most houseplants. One of the easier methods involves simply taking the leaves that have fallen from your Sedum.

Simply placing them on top of the appropriate potting mix and watering lightly can create new plants. You can also opt for the classic stem cutting, which we’ve described below.

Although low-maintenance, these plants can fall privy to a few issues involving insects.

Raising a plant indoors does limit the number of infestations that they are likely to get. But, bugs can be in the soil you buy at the store, or even come in through the window. Knowing what to look for is key when it comes to the overall health and well-being of your Donkey’s Tail plant.

We’ve already touched on the potential for root rot. They can also fall victim to black or sooty mold. This is rather easy to treat. Making a spray with diluted dish soap can tackle any form of mold, as well as rid the plant of a few insects.

Most of the time, mold will be present alongside insects.

Among the more common pests are aphids, scale insects, and mealybugs. Preventative measures should be done with care, as the leaves are incredibly fragile.

Aphids can usually be removed with a simple hose down. Just make sure that the pressure isn’t too high. Organic neem oil can also combat such pests with soft misting. This method may take a few weeks to become successful.

Problems can present themselves in a myriad of ways. Being observant is the first step in understanding what your Sedum needs. Here are a few hints that you may see if an issue arises.

The foliage of Sedum morganianum is extremely sensitive. If you notice the leaves start to drop, then this may be due to low humidity or light levels.

It may be easier to increase the overall humidity first, and then continue to change the spot where your Donkey’s Tail plant resides.

It may sound a bit strange, but the foliage may become soft. This is usually a result of overwatering.

Although these plants prefer moisture, allowing your plant to dry out between watering will help to restore the state of the leaves.

The stems and leaves are known for breaking off rather easily, even with only moderate handling. This can be one reason. Brittle stems can mean that the plant is too dry.

First adjust the way in which you handle your Donkey’s Tail plant. You will also want to add a little more water so that the roots are evenly saturated.

Keeping your succulent happy shouldn’t be too difficult as they are easy to maintain. Here are the most important elements to consider that will make your Donkey’s Tail plant long-lasting.

Is the Donkey’s Tail plant poisonous?

These plants are non-poisonous. They can, however, cause irritation if consumed.

Where can you buy Donkey’s Tail plants?

You can find Sedum plants in your local garden centers, or even online!

Touching a Donkey’s Tail will not harm you, but it can damage the plant. You may not get pricked, but leaving them alone will prevent the leaves from dropping.