You are working in your garden and discover a bug that looks like a slightly elongated ladybug that is bright orange, with no spots, long antennae and beady black eyes.

This is not a ladybug. This is a red potato beetle (Aulacophora foveicollis). This beetle is a pest and needs to be destroyed.

Are These Bright Orange Bugs with Beady Black Eyes Ladybugs? 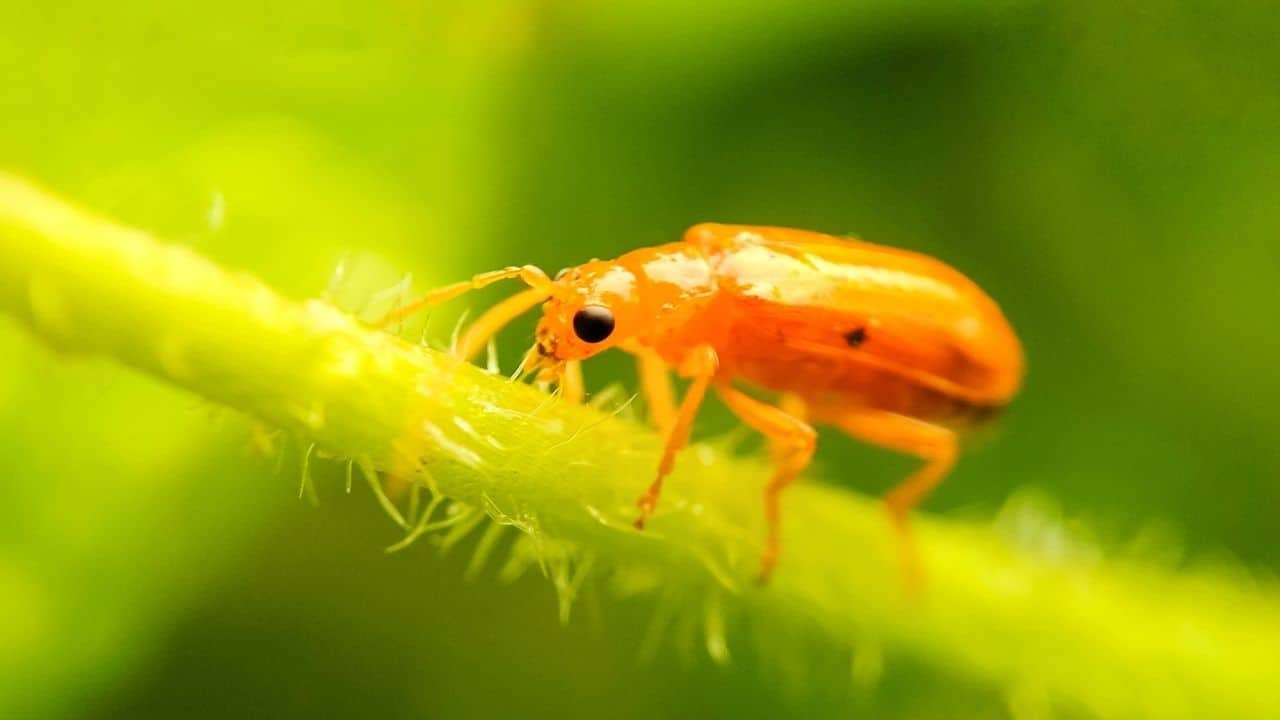 Although they are called red pumpkin beetles, the most common color of the adults is orange. They can vary in shade from a rusty brown to bright red.

They range from 5mm to 8mm long, or about the length of a housefly. Their abdomens may have thin white hairs.

Red pumpkin beetles are found all throughout Asia, Southern Europe, Australia, the Middle East, and Africa.

It originated in Asia and somehow spread throughout most of the world, probably through international shipping. For example, it’s thought to have spread to Greece in 1908 through vegetable shipments from Turkey.

Adults live for months and can hibernate. In that time, the females lay up to 800 eggs, laid in small groups at the base of plants.

In six to fifteen days, the eggs hatch. The grubs tunnel underground.

Except for tunneling up into vegetables, they spend most of their time underground one (2.54 cm) or two inches (5 cm) deep. In as little as 25 days, they dig deeper into the soil and transform into pupas.

However, they can spend cold months hibernating underground about a foot or 30 cm deep until the warm weather returns.

In seven to seventeen days, the pupas hatch into adults. They emerge from underground and never go back.

They immediately breed and get to eating. They fly from plant to plant.

Adults can breed up to five times a season. Their lifespan seems to depend on where they live, although many adults live long enough to dig into the soil to hibernate, but they usually live less than a year. 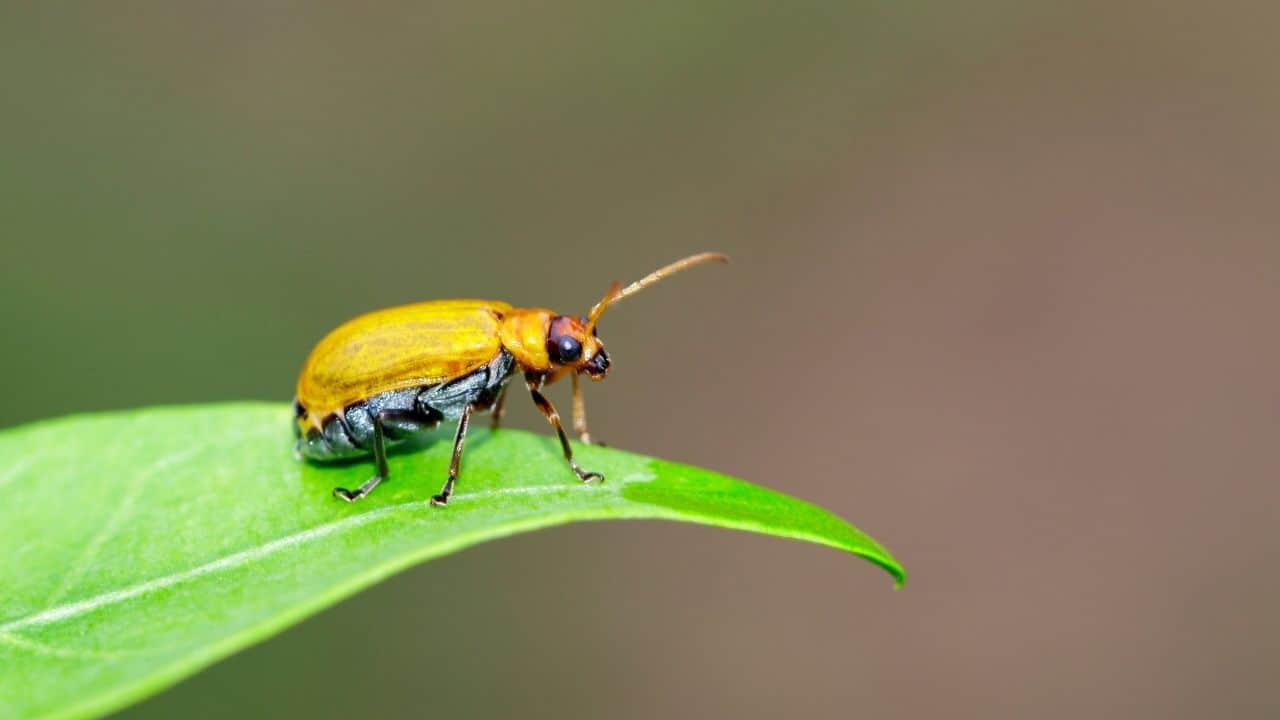 Red pumpkin beetles enjoy munching on a wide variety of vegetable crops, including:

Adults eat large holes in the leaves, which quickly kills the leaves. They can also devour seedlings, flowers, flower buds and eat part of the young vegetables.

This damage weakens the plant, making it more likely to catch fungal infections, which could kill the plant if the red potato bugs haven’t already killed it.

Grubs love eating the roots, leading to a plant’s withering and dying. Any vegetables that manage to grow are stunted and inedible.

They also eat any parts of vegetables that touch the soil. They can tunnel up into the vegetables.

However, it’s not always apparent that vegetables contain grubs. They are harvested and sold, bringing a bad surprise to whoever buys the vegetables.

There is not a general consensus on what chemical or natural pesticide to use to kill red pumpkin beetles.

A 2014 comprehensive study on all of the studies done on red pumpkin beetles published in the Academic Journal of Entomology came to no conclusions as to what best to do but did give some praise to phosphamidon, carbaryl, extract from the plant Parthenium hysterophorous and neem oil at a 7.5% solution. 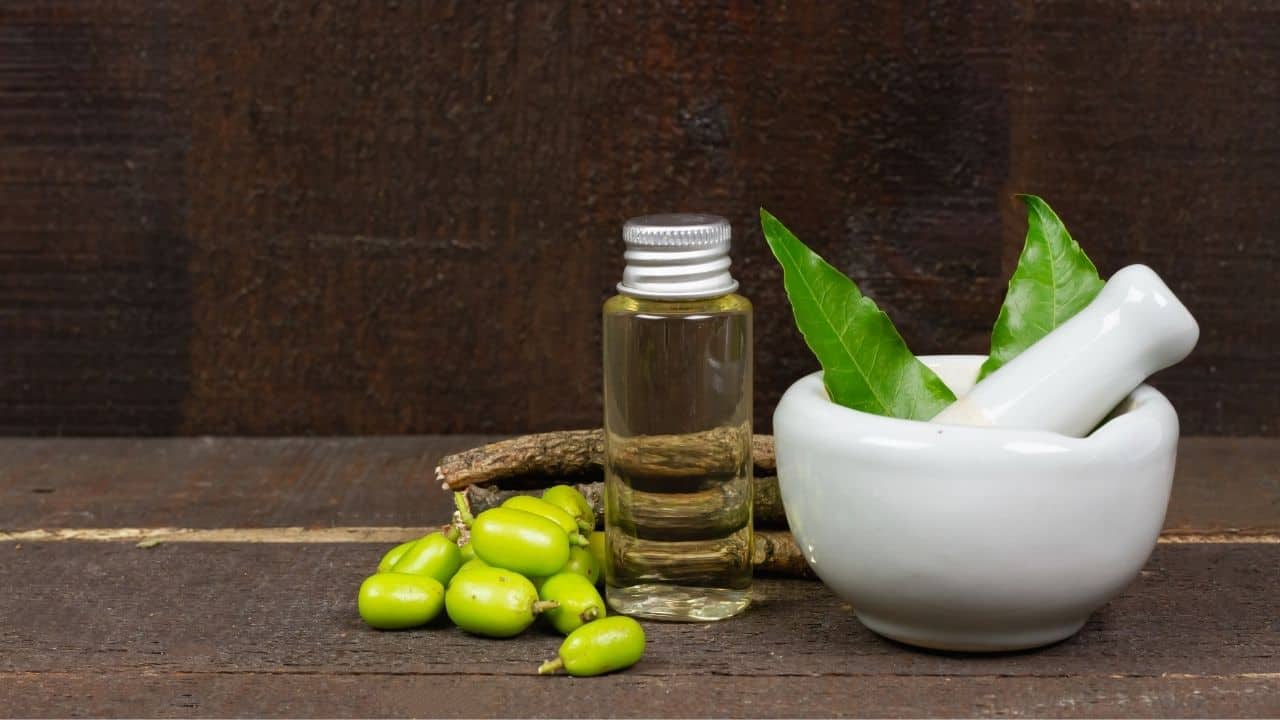 Traditional materials used to treat red pumpkin beetles had varying effects, but none are recommended for use today.

Deltamethrin is the active ingredient in many commercial insecticides and is widely available.

One thing that is known is that red pumpkin beetle eggs need to be moist in order to hatch. CABI notes that digging furrows around food plants that the beetles like to eat helps to dry the eggs out.

The plants are then watered by placing water in the furrows instead of directly onto the plants. The plants could suck up needed water through the soil, but eggs at the base of the plants remain dry and eventually dry up.

Before planting any new plants or seedlings, be sure to weed the plant beds, because eggs or beetles may be on the plants. Burn or otherwise get rid of these weeds.

Also, keep vegetables that red pumpkin beetles like far apart. Don’t grow cucumbers next to pumpkins, for example. This keeps the beetle populations down.

When an infestation of red pumpkin beetles is eliminated, do not plant any new plants for at least one month after harvesting.

When you do put in new plants, use fast-growing varieties, since they have more resistance to red pumpkin beetles.

Are There Orange Ladybugs with Black Eyes?

There are two harmless species of orange ladybugs with black eyes and white spots that can be found in the UK, the orange ladybird and the cream-spot ladybird. Ladybugs are called ladybirds in the UK. They come in shades of orange, although they often tend to be a darker orange.

Are There More Than One Species of Red Pumpkin Beetles?

There is another species of beetle called the red pumpkin beetle, with the scientific name of Raphidapalpa fovecollis. It is related to Aulacophora foveicollisand is also a pest of food crops. It’s found in Asia, Africa, Europe, and Australia.

Are Red Pumpkin Beetles Found in the United States?

So far, red pumpkin beetles have not been spotted in America. If you do find one in North America, please report it to the USDA’s Animal and Plant Health Inspection Service.


The Least You Need to Know

Although it might be good luck to see a ladybug, that bright orange beetle with beady black eyes is no ladybug.

It’s a destructive pest of many food crops known as the red pumpkin beetle (Aulacophora foveicollis).

It’s best controlled with a combination of manmade or natural pesticides and good gardening management.