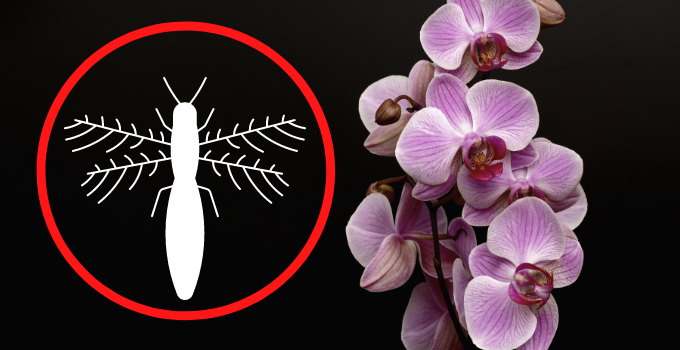 Having houseplants is usually a wonderful experience – until the day that you find the leaves have been eaten by some kind of pest. Granted, this may not be extremely common, but it is an issue that some owners find themselves having to deal with.

This is extremely devastating for those with a showy flower such as the Orchid. A pest infestation can completely destroy those beautiful, unique flowers you worked so hard to maintain.

One such pest that loves to prey upon the Orchid plant is the thrip. But, what are they, and how can you go about removing them without injuring your flora? All will be explained in this article!

You may have a number of questions. What is a thrip, and why do they target the leaves and flowers of an Orchid?

Can they be found on floras kept indoors, or are they exclusively found on garden plants?

We wish to focus on how thrips specifically can affect members of Orchidaceae, but let’s start with a brief overview of what a thrip is.

Thrips are found within the family Merothripidae, or Thunder flies, with a pair of wings and slender, dark bodies.

They’re almost impossible to see with the naked eye, taking on the appearance of a dark spot without a hand lens. They tend to attack garden plants and occasionally feed off of flowers, both inside and out of the home.

Thrips will feed off of a plant’s fruit, flower, or leaf by puncturing it and sucking out the juice until it becomes crippled or dead. So then, why do thrips target Orchids?

WHY ARE ORCHIDS SO ALLURING TO A THRIP?

Orchids are widely known for their eccentric appearance! Their flowers, in particular, are unlike any other plant as they are fused to take on a three-parted shape.

They also tend to come in an array of bright colors such as pink, yellow, purple, or blue. That unique appearance is meant to attract pollinators – but unfortunately, this can also bring in pests such as the thrip.

In fact, thrips are believed to target plants with yellow, blue, orange, or white hues. The Orchid does follow this description! All in all, thrips are drawn to the showy display with a tasty, juicy plant.

Now that you understand briefly what a thrip is and why you could find this pest on your indoor Orchid, let’s move on to identifying and removing them! 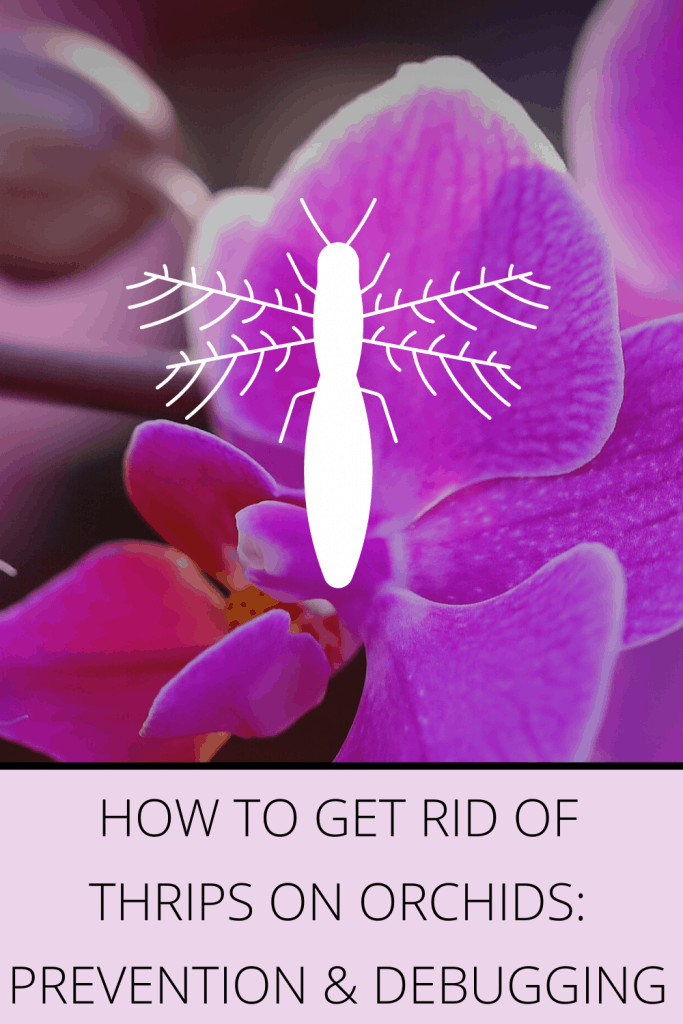 IDENTIFYING THRIPS ON YOUR ORCHID

We mentioned before that it’s extremely difficult to see a thrip entirely without a microscope or hand lens. This is due to the fact that they are roughly between 0.5 and 5 millimeters in overall body length.

So then what are you supposed to do? Can you see them before they cause irreversible harm? The answer is yes!

Oftentimes, the first moment where someone truly notices that their plant has been attacked by thrips is when the leaves and fruit have been deformed, particularly in the newer growth.

One thing we haven’t mentioned yet is that they exist in groups. When you find one thrip, chances are that there are anywhere from five to twenty five more on your plant. You can safely identify them from checking on the foliage of your Orchid.

Specks that look either black or a dark silver are a great way to know that your plant has a thrip infestation. The little black dots are fecal matter that has been left over from the insects as they gorge.

Another physical distinguishable feature might be small scars located on the top regions of the leaves. These scars are white, and usually a sign of the Western flower thrip, or Frankliniella occidentalis.

You might also want to take note of any speckling found within the inside of the flowers, as this is another common location.

We’ve found a quick tip that might be useful for conducting your own thrip investigation!

Take a white sheet of paper and the plant that you believe that may be under attack. Gently shake the plant, namely the flowers and leaves, over the piece of paper and see what happens.

If you notice those small black, silvery, or even yellow dots gathered on the paper, you can properly diagnose that your Orchid has thrips.

But, now that you’ve located the pest, how do you get rid of them, particularly without damaging your beautiful Orchid?

HOW TO RID YOUR ORCHID OF THRIPS

Upon realizing that you have thrips eating at your beautiful Orchid, you may be tempted to take extreme action. We highly recommend that you refrain from getting out the insecticide if you can help it.

Thrip infestations aren’t always on the extreme side, especially when caught early enough. There are some preliminary actions that you can take before opting for harsher methods!

STEP ONE: HOSING DOWN

Most pests can be removed without doing much at all. Using the trusty sink or hose, you can gently place your plant underneath the running water. In most cases, this will at least rid the individual of at least a few bugs.

While doing this, make sure that your flora doesn’t become flooded. The soil won’t respond well to too much water at once. It is also beneficial to keep in mind that extremely cold water could send your Orchid into shock.

After trying to dislodge any bugs with the faucet, you can gently wipe down each leaf. This will sometimes allow you to rid the plant of even more pests in a way that isn’t all that invasive.

Still have some bugs affecting the growth of your Orchid after a simple rinse off? That’s perfectly fine. You can add a few substances that aren’t worrisome in terms of harmful chemicals.

Neem oil is a fan favorite of most plant owners dealing with pests. This non-toxic substance can be added through the use of a spray bottle. Leave it on for ten minutes and carefully wipe it off.

A handful of pests, such as the thrip, dislike the smell of Neem oil, thus making it the best solution for smaller infestations.

In more extreme conditions, the first two steps might not be enough to fully rid your Orchid of every single bug. When that’s the case, you’ll have to resort to more extreme measures.

When applied carefully and in the right doses, they won’t actually cause harm to your Orchid. Insecticidal soap is a more concentrated solution, and yet less intense than insecticide.

Use the soap to cover the entirety of your Orchid, applying every ten days until all pests have been removed. You can use it in combination with a mild insecticide, which should be administered in the evenings since sunlight will cause a burning reaction.

Both of these options should be considered after you’ve tried the milder methods. If you have to go about a harsher treatment, don’t worry! Just follow the instructions and your Orchid should be just fine.

There are a few ways in which you can try to keep a thrip infestation from happening in the first place. The first suggestion is quite simple!

Checking on a fairly regular basis is a great preventative measure and can save your Orchid from long-term damage. Another method involves hosing down any plant before it comes into your home.

If there are a few bugs on the individual, you’ll save yourself later on down the road. Although fairly straightforward, simply keeping an eye on your plant can end an infestation at the start!

OTHER PESTS AND DISEASES TO WATCH OUT FOR

Hopefully, this article has been able to give you a piece of mind when it comes to the potential infestation of your beloved Orchid plant.

When caught early on, it doesn’t take much to treat the individual with minimal damage being sustained.

Now that you’re an expert at thrip damage control, here’s a list of other pests and diseases that could attack your Orchid, many of which we’ve written articles about! Just as with thrips, most cases are salvageable.

Getting rid of a thrip infestation will benefit you as well! The adult and larval stages can actually bite humans, some of which lead to welts and rashes. Fortunately, there are no known diseases that people can get from being bitten.

Where do thrips come from?

Interestingly enough, the earliest documentation of a thrip insect was drawn by a Catholic priest in 1691 by Phillippo Bonanni. This took place in Italy! As of today, thrips are found throughout North America.

What are thrips attracted to?

Thrips have been found in buildings that are either relatively hot or cold, depending on the time of year. Other than that, they are drawn to floras and veggies found in the garden, as well as plants that are blue, orange, yellow, or white. 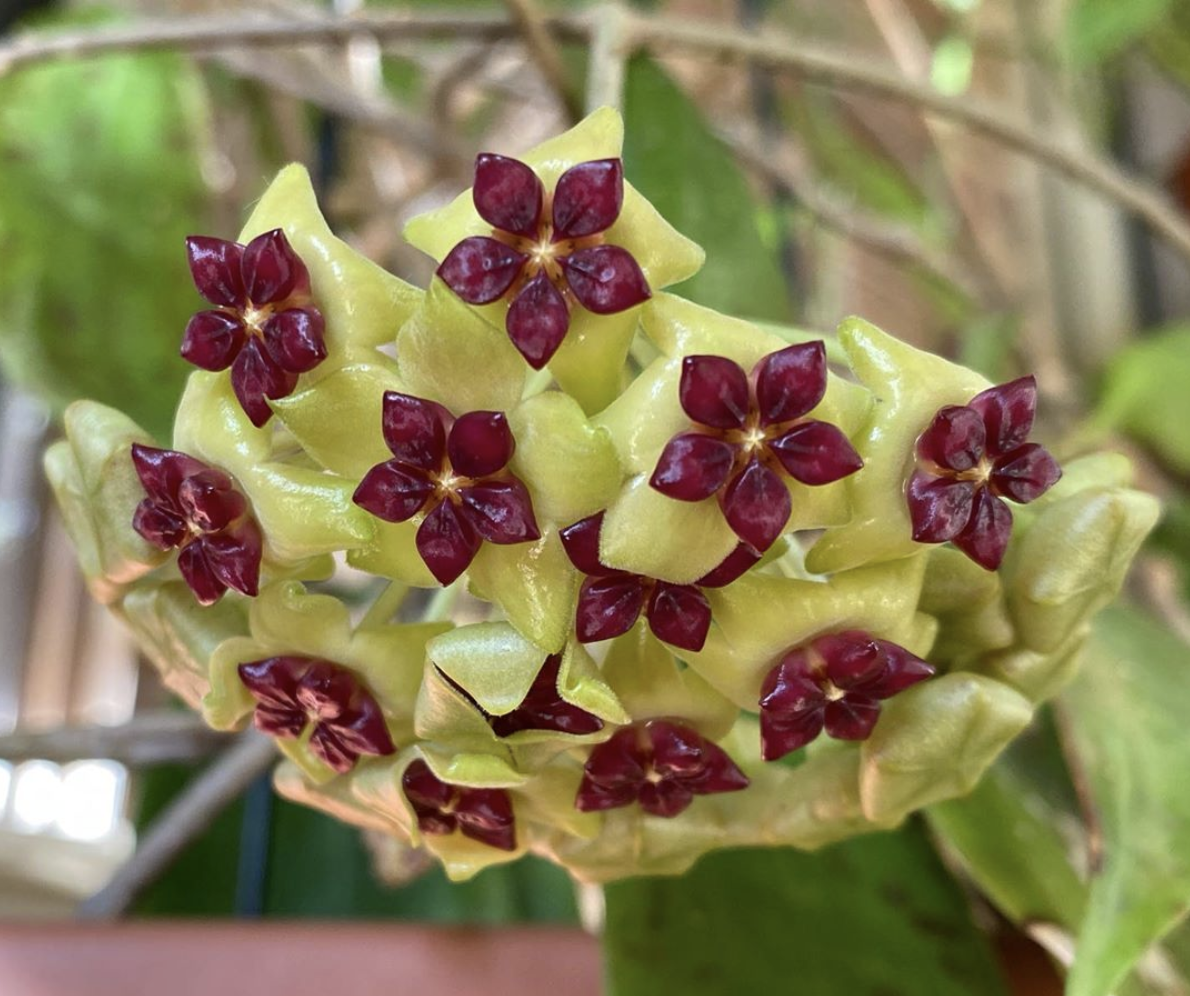 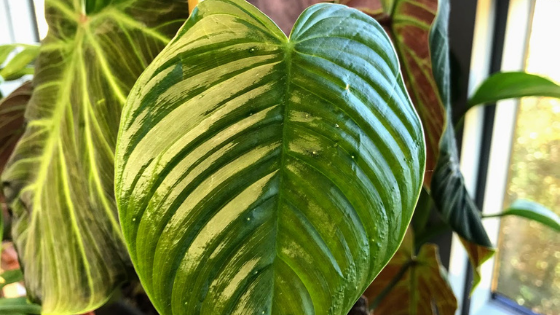