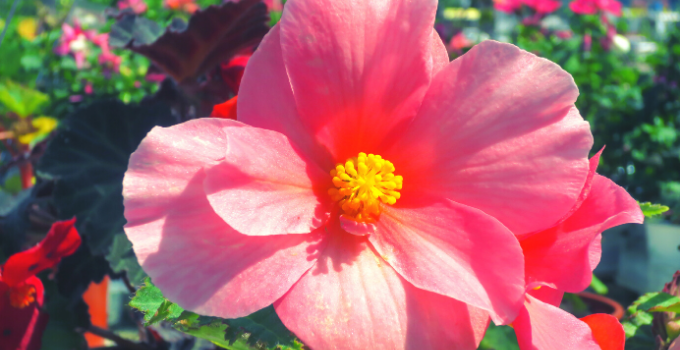 Scarlet Begonias are also known as Begonia Coccinea, and it is part of one of the most diverse families known as Begoniaceae. This plant is a native of the Atlantic forest located in Brazil. Due to the stunning appearance of the flowers and foliage on this plant, it is grown as a decorative piece for home decor.

Scarlet Begonia loves to be kept under partial shade or full sunlight. The plant thrives in soil that is well-drained and has a pH ranging from high to moderate. This plant must only be watered once or twice a week; in other words, water it moderately in the warmer seasons.

Scarlet Begonias have few stems that have a bamboo-like appearance and can grow up to one meter tall. The stems have leaves that are 4-6 inches long and 5-8 inches wide.

The leaf surface has a mixture of colors ranging from green grass ting to red. These leaves are arranged in an asymmetrical manner on the stems. Because of its thick stems, this Begonia is known as a fibrous Begonia. 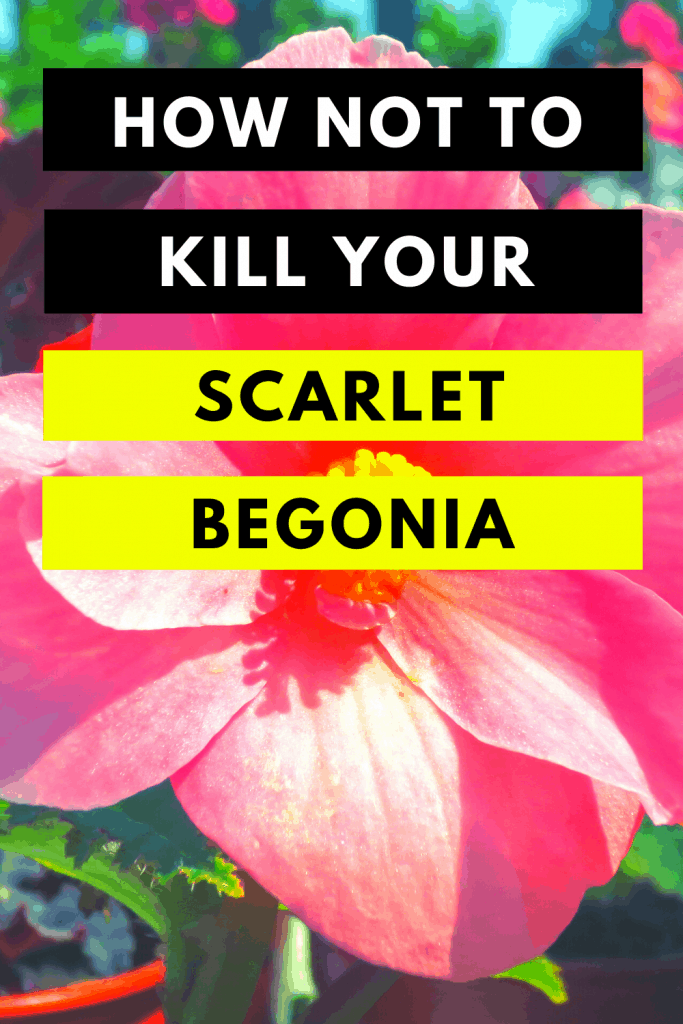 Soil plays an essential part in plant growth. When it comes to Scarlet Begonia, they prefer humus-rich soil that is well-drained. The soil should be sandy as well as loamy and must have a pH range of 6.1 to 7.5.

The plant tends to thrive in soil that is slightly acidic or slightly alkaline.

Mucky, dry, and infertile sand should never be used for this plant as it cannot grow in those soil conditions.

You can start preparing your garden by using the soil you already own. However, make sure to add organic matter, such as:

This will help make the soil loose and easier to work with. These organic materials will allow drainage and add further nutrients to the soil, which will allow the soil to remain healthy by promoting the growth of earthworms and other organisms.

Scarlet Begonias do not have a high water demand. They require moderate watering, meaning they should never be watered too much or too little. Not providing enough water can dry out and kill the plant.

For overwatering, it can have the opposite effect on the plant’s growth by causing issues with the leaves and flowers as this plant is extremely sensitive to overwatering. Water the plant whenever you have observed that the plant-soil has become dry. Avoid drenching the soil in water.

You can use irrigation tactics such as drip irrigation to avoid drenching the soil in water.  Remember, as much as overwatering can be bad for the soil, the same can apply to not watering it enough. This is because a lack of water does not let the plant take in proper nutrients and minerals through the roots.

If your plant is wilting, then do not panic as wilting plants can easily be recovered by providing the plant with enough water. But, if you overwater your plant, then your plant will die.

Scarlet Begonias need proper sunlight to grow. They require either direct sunlight or partial shade for its stunning foliage. The amount of sunlight it requires depends on the temperature and season.

You should place your Scarlet Begonias in a bright window as bright light will help intensify the leaf colors and promote the growth of flowers.

During the summer seasons, the plant thrives under partial shade as it won’t cause the leaves of the plant to scorch under direct sunlight.

Almost every plant will grow well under the bright sun if it is not exposed to extreme temperatures. Scarlet Begonias are more tolerant of sunlight than other plants, but it still needs to be provided with shade on the hottest days.

Scarlet Begonias tend to suffer in dry air, so it is best to keep the humidity levels balanced by misting the plant or putting a tray of moist pebbles under the pot.

You should fertilize Scarlet Begonias only once a month during the spring, summer, and autumn seasons. Use a fertilizer that is diluted; you can easily do this by taking a ratio of 1-part fertilizer and 3 parts water.

Before repotting, you will have to pot the plant properly for growth. To do this, you simply need to use a basic soil mixture known as a peat-based mixture or a general potting mixture. For extra drainage, add some clay pot fragments at the bottom of your plant’s pot.

Continue to then move the plant into a new pot every spring or summer until it reaches its maximum pot size. However, Scarlet Begonias are better off being slightly pot-bound, but if you decide to repot it, then only do it during the spring and summer seasons.

Remember to not add too much soil around the roots as it can cause waterlog and cause the roots to rot. Preferably use clay pots, rather than plastic pots, as they tend to dry up faster.

If you carefully prune your Scarlet Begonia, then it will help keep the plant alive and neat so that it can be hanged in baskets. You should prune your plant once it has grown as tall as 6 inches. To prune your plant, follow these steps:

Scarlet Begonias can be propagated either by cutting or through seeds. To propagate the plant through cutting, follow these steps:

The roots will take up to three to six weeks to appear. Once the roots have come in, uncover the pot and begin to water the plant slowly and also use liquid fertilizer once or twice a week.

Do not overwater the plant. In about six months, move the plant into a slightly larger pot and change the soil as well.

To propagate Scarlet Begonia through seeds, follow these steps:

When the plant has grown after six months, repot it into a new pot that is slightly larger than the old one. Continue to treat the new plant as mature Scarlet Begonia.

Scarlet Begonia has stunning blooms that complement its equally stunning foliage. It is said to be a heavy bloomer as it often provides several flowers once it starts to bloom.

The flowers are red in color and look stunning in every house setting. They appear in clusters on red stalks and grow from summer till mid-august. This plant also has fruits that have a triangular capsule appearance, and the size of the fruit is three inches long.

Scarlet Begonias are easy to grow as they do not require a lot of maintenance and can be grown indoors and outdoors. They have a moderate growth rate throughout the year and can grow up to be at least one meter (3.3 feet) tall.

Scarlet Begonia flower petals are mostly in danger of botrytis infection. This infection often leads to the growth of rotten fruits as they become water-soaked and soft. The fruit then quickly starts growing mold on it, and this attracts further harmful organisms.

Other parts of the plant can also get affected, such as the stem or bulb. This fungal disease can cause the leaves to also gain spots. If you have other plants growing around, then the fungus can release its spore that will disperse in the wind and travel to other plants.

You can treat this infection by either throwing away the infected plant or removing parts of the plant that have been infected, such as the leaves, fruits, and stems. Also, reduce the humidity levels around the plant and apply fungicides to your plant.

You can also use fungicides, but it won’t be as helpful. However, applying it beforehand on your plant can prevent these leaf spots from forming in the future.

Powdery mildew is despised by every plant owner. This is a fungal disease that tends to attack every species of plant. Even powdery mildew has different species and can attack a wide range of plants.

To know whether your plant has been infected by powdery mildew, all you have to do is observe the leaves. If you spot a layer of mildew forming on the top of the leaves, then it is time to get rid of that area of the plant as the spores can travel in the air and infect other parts of the plant as well.

Powdery mildew can cause your plant to not grow properly and will reduce its fruit yield. Since this fungus thrives in warm, dry climates and high humidity, try to reduce the level of humidity around the plant.

Mealybugs also tend to be one of the most common problems faced by any gardener. Mealybugs tend to infest several species of plants, which is why they become a hazard in places where a variety of plants are being grown.

It is important to take action as soon as possible once you know your plant has been attacked by mealybugs as they grow fast. Mealybugs are not easy to spot since they’re almost invisible when present on leaves.

The best places to catch them are the tightest spots in your plant, so look at them and get rid of the mealybugs the minute you spot them. You can easily remove them with alcohol by putting some on a cotton bud or pad and wiping the plant with it.

Aphids are common among several plant species as well. These pests tend to not leave any plant alone once they have spotted them, especially newly growing plants.

Aphids may be the cause behind why your leaves turn yellow or tend to curl up as these are signs of aphid infested plants. To get rid of them, you will have to remove the infected part of the plant. To avoid further infestation of these pests, use less fertilizer.

Here are some basic tips you can follow to properly grow your Scarlet Begonia:

They tend to only live for 4-5 years. When the plant begins to die, just cut off a stem from the plant and grow a new one.

How do I ensure that my Scarlet Begonia will keep blooming?

Will my Scarlet Begonia thrive if it is potted?

Scarlet Begonias can be kept as indoor plants and also as outdoor plants. Thus potting them will not cause them any harm.

Should I plant my Scarlet Begonia indoor or outdoor?

You can plant it anywhere you like as long as you provide it with proper living conditions; it will thrive both indoor and outdoor.

Are Scarlet Begonias harmful to consume for animals?

Scarlet Begonia is harmful if consumed by both animals and humans. Thus make sure to keep pets and children away from it.

How deep should I plant my Scarlet Begonia?

Dig a hole at least 2 inches deep and plant your Scarlet Begonia in it.

Why won’t my Scarlet Begonia grow?

If you’re providing your plant with excess shade, this can cause the plant to not grow. Move it to an area where it can get partial sunlight or keep it under full sunlight.

Scarlet Begonias are stunning to look at and even easier to take care of. Unlike many plants, Scarlet Begonias do not have high demands; thus, keeping the plant as an indoor decoration can make your house even more beautiful.

Scarlet Begonias are known for their stunning leaves, so even if you have difficulty with blooming this plant, you will still have a pot filled with the unique leaves. 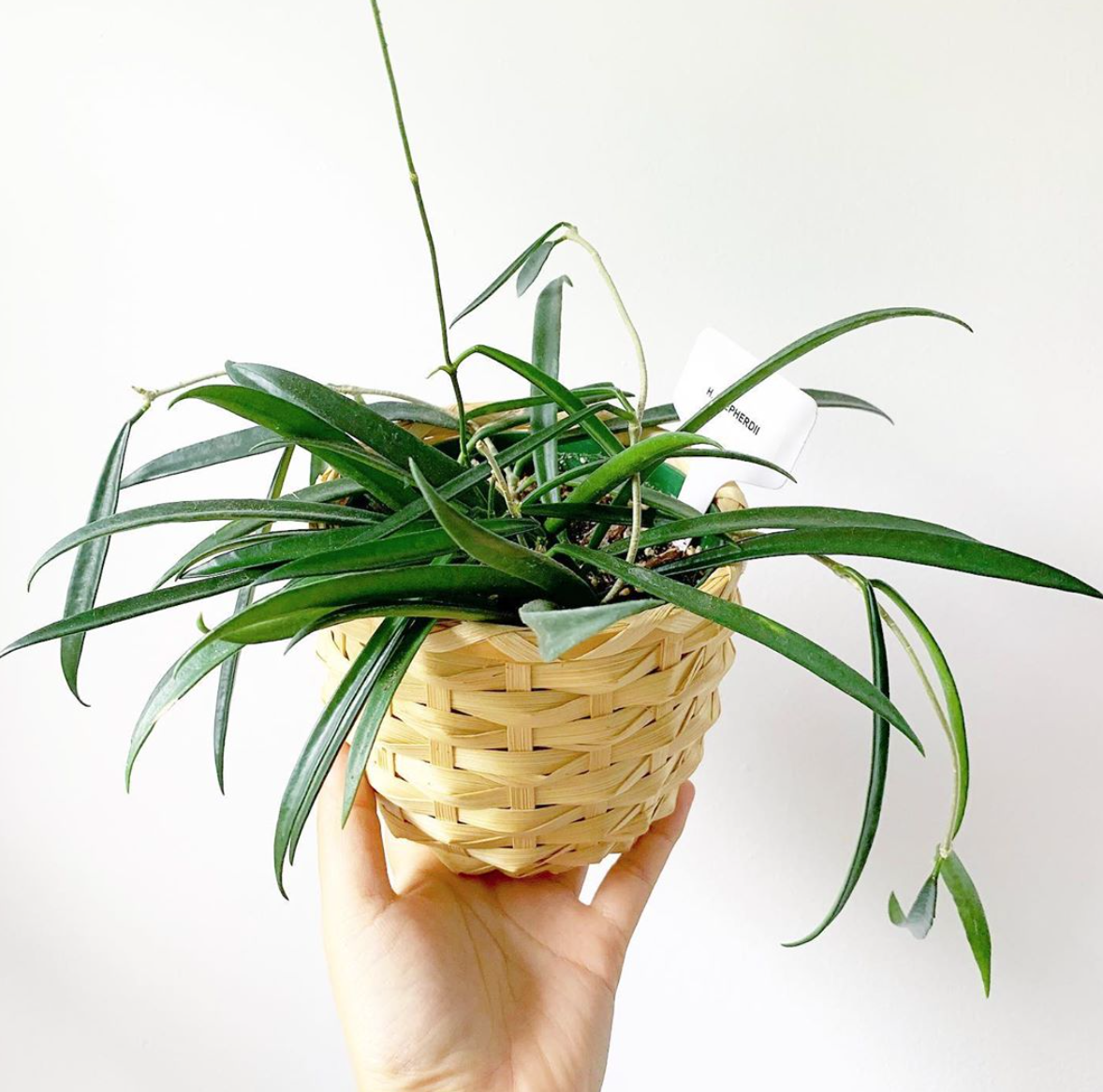 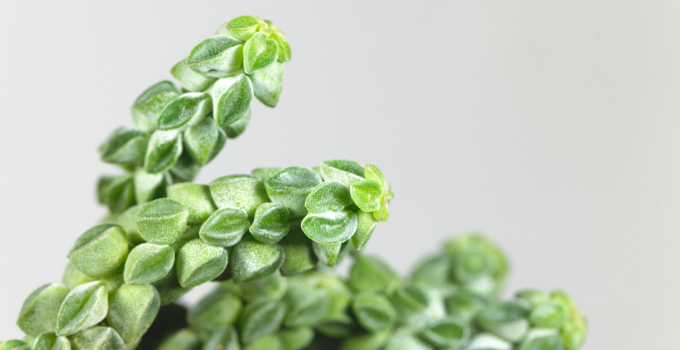 Next
Peperomia Columella Care: Here's How You Get it Right

[…] colors and shapes. We’ve put together end-to-end plant guides for several other varieties like Scarlet Begonia, Begonia Pavonina, or Begonia […]