Growing plants indoors or outdoors is one of the most incredibly relaxing things you can treat yourself with. These gifts of nature are not only beneficial for you but a blessing for everyone.

Plants are known to have a vast range of uses, which includes home decor and furniture to life-saving medicines.

However, these beauties may occasionally be attacked by pests and diseases. Two common problems include spider mites and powdery mildew.

What is the Difference Between Spider Mites and Powdery Mildew?

While spider mites are smaller, form a web-like webbing, and primarily cause leaf discoloration, powdery mildew is the settlement of a distinctive type of dust on the plant leaves and shoots. Spider mites and powdery mildew are equally problematic for plant growers. What is the Difference Between Spider Mites and Powdery Mildew

An Overview Of What Spider Mites and Powdery Mildew Are

Spider mites are a type of Arachnids and are closely related to, as some might guess spiders and ticks.

Due to their minute size, you can only see spider mites under the magnifying glass. They have over 200 species, all different from one another in terms of appearance, color, and size. 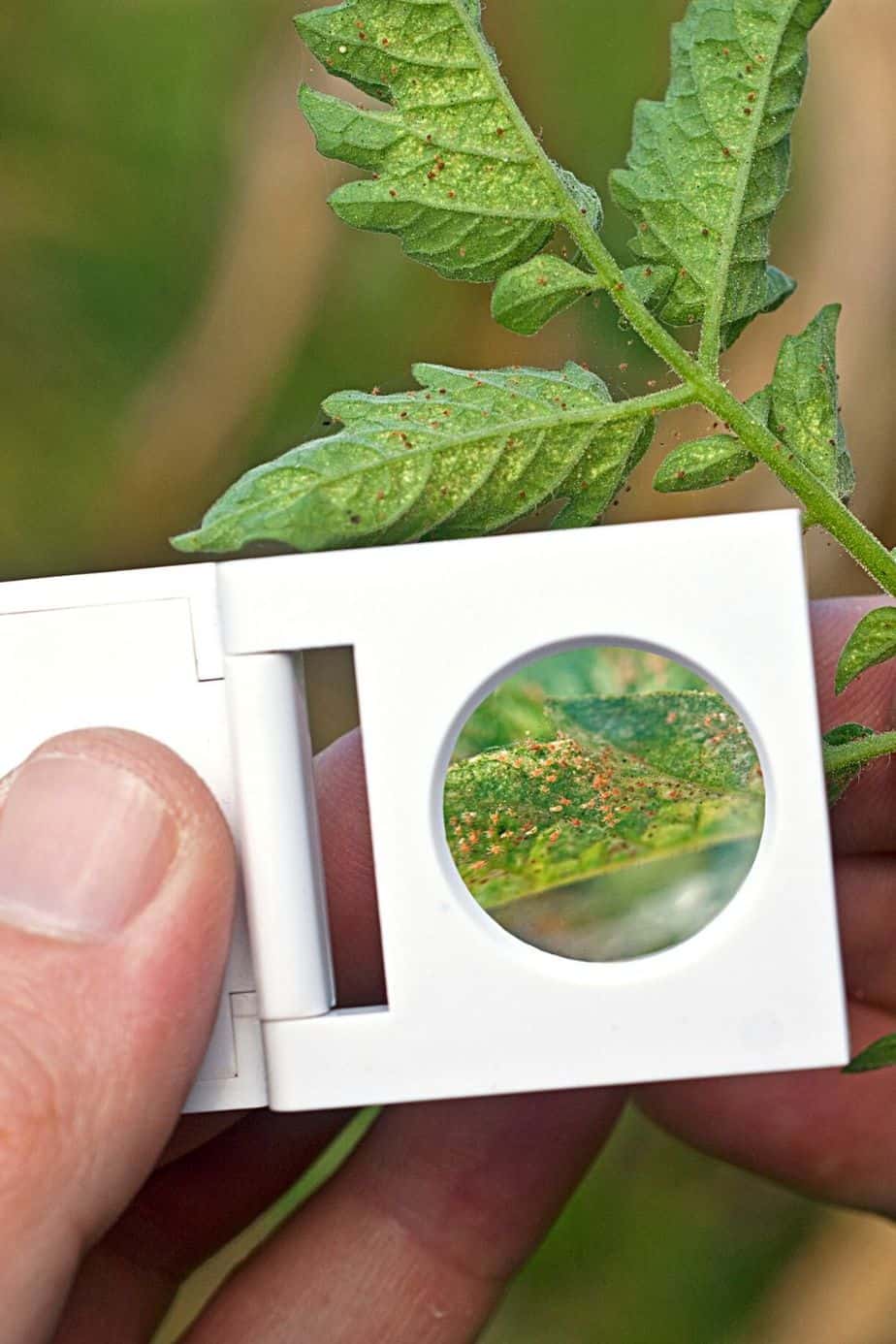 Due to their minute size, you can only see spider mites under a magnifying glass

The other frequent plant issue is the formation of powdery mildew. This disease occurs worldwide, affecting thousands of plants each year.

According to Colorado State University, powdery mildew is very common. Succulents are extra susceptible to this disease.

The powdery mildew appears as a whitish powder-like growth mainly on the surface of leaves, young shoots, flowers, and fruits. Looking into the Details

If you are still confused about powdery mildew and spider mites, do not fret as I will list down the main differences between these two.

This will help you understand and appropriately deal with each of the problems.

The Damage Spider Mites and Powdery Mildew Cause

The spider mites actively feed on plants during the hotter seasons. They suck on the plant’s nutritious nectar and deplete its nutrients.

As a result, the affected plant starts developing yellow spots; this is known as stippling. As the plant is further stripped of its nutritional elements, the spots get larger and eventually morph into one another to form multiple discolored areas.

This fungal disease is equally, if not more, destructive. The leaves affected by powdery mildew gradually turn entirely yellow and mostly die and fall off. The decreased number of leaves considerably lowers the number of carbohydrates synthesized by the plant. Therefore, the growing fruit, if any, is also adversely affected.

The shade the leaves provide is lost very early and that results in the plant becoming sunburnt. The scorching heat may also damage the plant’s remaining leaves.

Moreover, powdery mildew-stricken leaves may twist upon themselves, buckle, or distort. Overall plant growth is also retarded, and the fruit quality and yield are significantly lowered.

The appearance of the affected plants is a confusing factor. Leaves appear to be covered with dust when they are infected by powdery mildew and spider mites.

However, the differences can be seen fairly quickly when observed closely.

Whitish dust settles on the underside of the leaves when the plant is attacked by spider mites.

To distinguish the dust formed by spider mites from other organisms, you need to look at it using a magnifying glass.

The formed dust looks like they’re moving. The spider mites may also form a telltale spider web-like webbing on the plant. 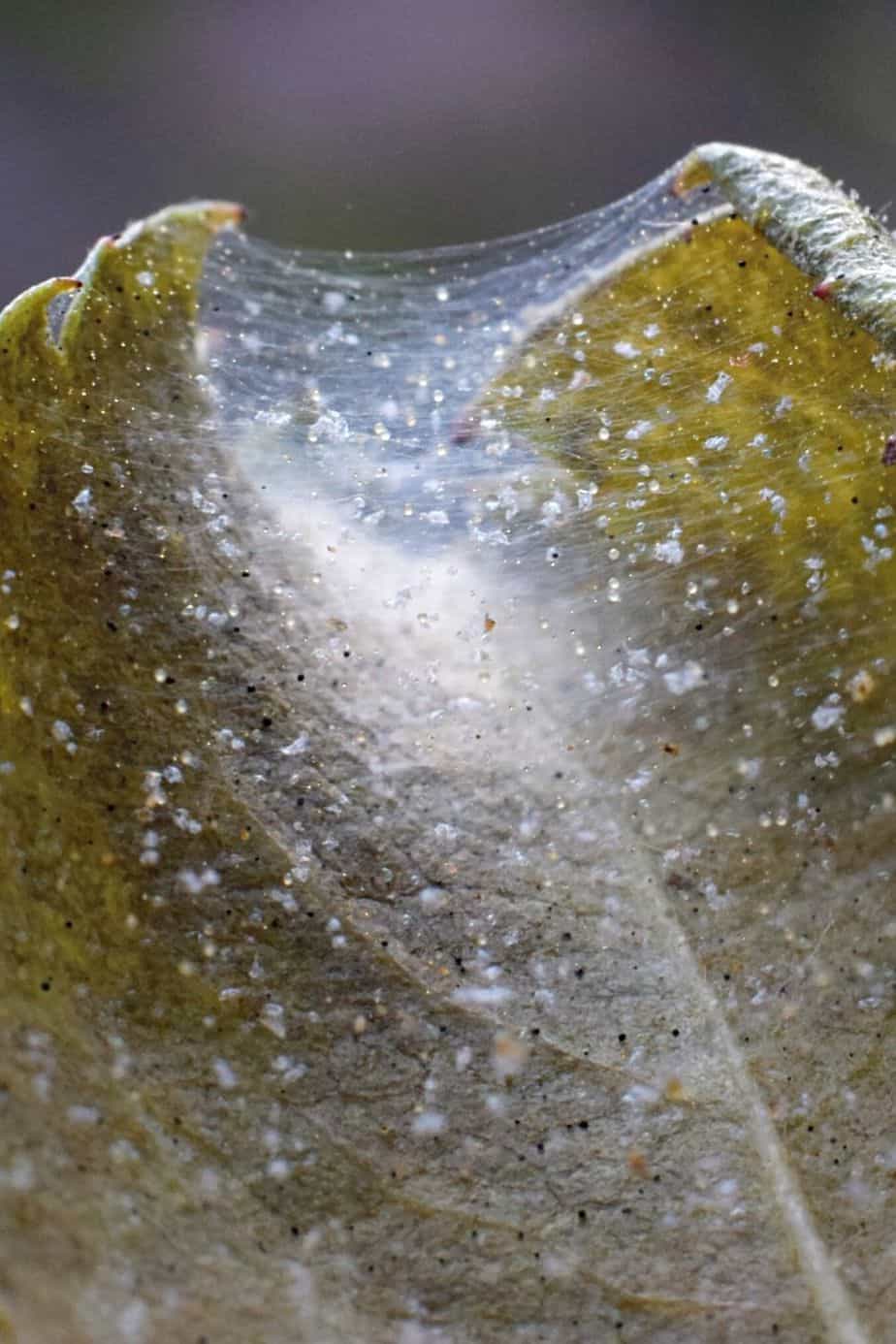 Spider mite-infested plants have a web-like webbing on them

They produce these webs to protect themselves and their newly formed eggs. A rather easy test will tell you whether your plant is infected by spider mites or not.

Hold a paper underneath the plant, shake it, and if black specks fall on the paper, your plant is infected by a spider mite infestation.

The plants attacked by powdery mildew look like flour has been dusted on them.

The dust pattern is initially circular and then appears as white spots which primarily form on the vines, leaves, and fruit. 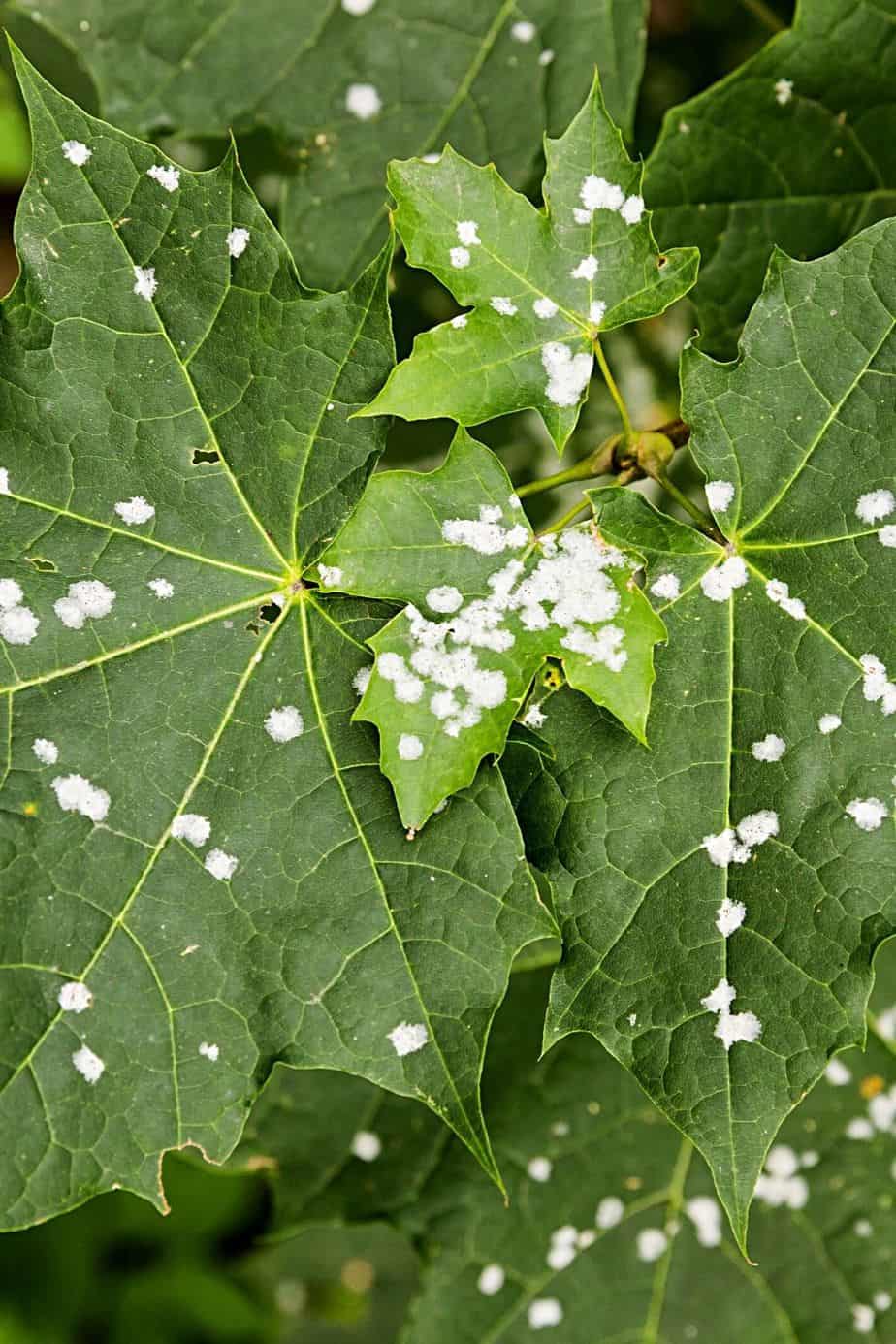 In early stages, a plant infested with powdery mildew has white spots on its leaves

Another distinctive feature is that powdery mildew mostly covers the upper surface of leaves, unlike spider mites. However, as it progresses, it may form on the undersides too.

The Sources of Spider Mites and Powdery Mildew

A spider mite infestation can occur from a significant number of sources. The primary source is the plants themselves; transmission may occur from one infected plant to another healthy plant.

Additionally, the mites may latch on to your clothes and shoes or even your pet’s fur.

Other sources include garden centers and poorly maintained plants.

This disease has a fungal origin. Therefore, it is primarily transmitted by fungal organisms, the most popular being Erysiphe and Podosphaera.

The other less frequent infectious agents are Microsphaera, Phyllactinia, Sphaerotheca, and Uncinula. It travels through the air, helping the fungus fly off from one damaged leaf to another fresh leaf.

How to treat Spider Mites

There are a great many ways to treat a spider mite infestation.

You can hose down the plant under a sink or shower faucet. Please ensure that you wash off all affected parts to entirely eliminate the infestation.

Another excellent way is to apply neem oil to the affected foliage. Neem oil is an excellent organic pesticide that kills unwanted organisms and improves the overall look of the plant.

Its most significant advantage is that it is non-toxic to birds, many beneficial insects, and other herbaceous animals.

I suggest diluting neem oil before spraying it onto the plant and wiping it with a microfiber cloth.

For the insects undeterred by neem oil, use the commercially prepared insecticide spray. However, please remember to spray in the evening only and avoid placing the sprayed plant under the sun.

The sunlight and spray may combine and lead to leaf-scorching.

How to treat Powdery Mildew

The simplest and most natural way is to dust off the affected leaves. Another distinctive powdery mildew infection characteristic is that the dust comes off easily when wiped off the plant.

If you want an alternate natural way, use some baking soda (sodium bicarbonate) mixed with some neem oil or horticultural liquid and apply it to the dusty foliage.

This way is most effective when applied during the early stages or right before the outbreak of the powdery mildew.

Another way is to use potassium bicarbonate which works considerably well even after the powdery mildew outbreak. It acts as a fungicide, and therefore, gets rid of the mildew.

The other options include vinegar, and surprisingly, mouth wash.

While ideally, vinegar needs to be diluted, mild mouthwashes may directly be used on the damaged plant.

Lastly, you can use a commercially prepared fungicide spray to get rid of the fungal powdery mildew.

If things get out of hand and no solution seems to work, I recommend removing the plant and placing it away from its fellows till it fully recovers.

Powdery mildew and spider mite infections are preventable and treatable. You may use a fungicide spray and an insecticidal spray, respectively.

How dangerous is powdery mildew?

Powdery mildew is usually a mild fungal infection that is not fatal. Mostly, it is resolved by using a fungicidal spray and the affected plants recover fairly quickly.

An effective and quick way to kill spider mites is to use neem oil or insecticidal spray directly on the affected foliage and other parts.