Geraniums are one of the easiest plants to grow, and their flowers can be a range of beautiful colors. Not only are they easy to grow, but they look so lovely in a window box, on the deck or patio, or in a hanging planter.

They truly are a beautiful plant—they have brightly-colored blooms and thick greenery that fills up negative space and makes the plant look healthy and full of vigor.

While geraniums are an excellent choice for a low-maintenance, easy-to-grow plant that rewards you with beautiful flowers, they can be quite susceptible to certain insects.

If you’ve ever come outside to water your geraniums and found the buds hollow and eaten, holes in the leaves, and general disarray, you know how frustrating it can be.

Geraniums can be particularly susceptible to two common pests that feed exclusively on their leaves and buds: the geranium budworm and the geranium sawfly. 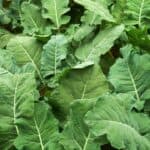 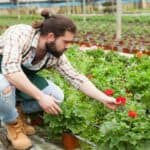 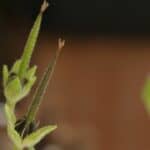 If your geranium has holes in the leaves or buds, you’re most likely dealing with geranium budworms or geranium sawflies. Control methods include handpicking, neem oil, insecticides like Spinosad, and using sterilized soil for planting.

We just mentioned that two pests are particularly damaging to geraniums—geranium budworm and geranium sawflies.

However, other common pests love to eat vegetation and leaves from any plant (including geraniums), like aphids, thrips, greenflies, whiteflies, etc.

For right now, we’re going to discuss the two main pests (budworm and sawfly) that love to make a lunch out of both geraniums and pelargoniums.

We’ll talk a bit about the insects themselves, the kind of damage they cause, and what kind of control methods are effective enough to prevent them from attacking your geraniums.

Geranium budworms, also known as tobacco budworms, can wreak havoc on your plants. They have the capabilities to cause some severe damage, so it’s important to stay vigilant or risk losing all of your plants. They also love nicotiana, tobacco, cotton, and petunias too.

They may look like caterpillars, but they’re actually the larvae of a small moth and don’t get much bigger than about 1 ½ inch. If you’ve ever seen tiny brown moths fluttering around your geraniums in the early evening, they’re laying eggs on the underside of the leaves.

These larvae are typically brown, but when they feast on the buds of your geraniums, they’ll actually take on the color of the blooms—that’s right, their bodies will tinge red if the flower buds and petals are red.

Budworms also have a yellow stripe down their body and tiny hairs that stick up, which would feel rough if you were to touch them.

The damage they cause is to the buds of your plants, hence the name budworm. They’ll literally eat every single bud from the inside out, leaving a hollow skeleton behind.

Sometimes, they will only bore small holes deep into the core of the bud. The bloom may still open, but its petals will be raggedy and have holes in them. Or, they won’t bloom at all because they’re too damaged to open.

If you think you may have budworms, you can head out around dusk when they’re most active. After they finish munching for the season, they fall off the plants into the soil and then pupate.

Budworms overwinter in the soil, so using specific control methods is essential to keep them from ruining your geraniums year after year.

One of the best techniques for controlling geranium budworms on your lovely flowers is the oldest trick in the book: handpicking, and then you can squish them or drop them into a bucket of soapy water.

Other than the yuck factor, handpicking is a very effective control method. Don’t worry, though,  because touching budworms won’t cause irritation or a rash, and the they don’t bite, so it’s perfectly safe.

Another control method is to prune and deadhead the damaged buds. This method is only ideal for minor infestations—otherwise, you could be left with only one or two healthy buds if the infestation is very bad.

You can also use insecticide. A popular method is Bt, also known as Bacillus thuringiensis. It’s a natural bacteria that kills caterpillars and worms. However, it may not be as effective as some other methods.

Bt also won’t work if the tiny worms have already bored deep into the buds. Since they’re already on the inside, Bt sprayed on the outside won’t work.

If the Bt doesn’t work, you can try a different natural insecticide called Spinosad. This will effectively kill the budworms and is more effective than Bt. However, we’re going to give you a warning: Spinosad will kill bees.

As you know, bees are essential pollinators that are becoming more and more endangered as the years pass.

Spinosad is an effective insecticide but should only be used after dusk, when bees aren’t pollinating. If it’s allowed to dry completely, it will be safe for the bees the next day.

If you prefer synthetic insecticide, reach for Malathion. However, be forewarned that this may also kill beneficial insects and pollinators, so only use it for severe infestations. You also may need to use more than one application.

Since these pesky budworms overwinter in the soil, an excellent control method is using sterilized soil to prevent them from coming back in the spring. You can use the microwave or the oven, or you can buy sterile potting mix.

The geranium sawfly is another pest that will be more than happy to munch on your lovely red or pink geraniums. They’re named “sawfly” because the female adults use an organ that looks like a serrated straw to slice open plants and lay their eggs in them.

They may be named “sawfly,” but they’re actually closer to a wasp, except they don’t have the standard segmented body and thorax of a wasp.

Sawflies are so specific in their tastes that the different varieties are named after the plants that they love the most, like rose sawfly, geranium sawfly, etc.

However, it’s not the adult flies that you have to be worried about, though. It’s their caterpillar offspring that cause the most damage.

Remember, they’re named the “geranium sawfly” because they literally don’t eat anything else—so stay vigilant with your geraniums because sawflies can and will happily make a lunch out of them.

You can identify the larvae because they’re usually a gray-ish green color with dark brown heads. They will feed on the leaves of the plants, leaving ragged holes that make your plants look like they’re half dead.

If you disturb them, they’ll drop right from the leaves onto the soil. This means that it can be hard to find them for handpicking.

Then, they’ll slowly inch their way back up the plant and start munching away on the leaves again, causing significant damage and reducing vigor.

They can be particularly damaging to young plants, which are more susceptible to damage.

The problem with geranium sawflies is that they’re not technically caterpillars, so usual control methods won’t be all that effective.

That means that the Bt we recommended for dealing with budworms won’t be effective against the sawflies. Unfortunately, they can be a bit tough to get rid of if you don’t have a lot of time to spend handpicking.

However, if you do have the time and the nerves of steel, handpicking is an effective method. These larvae are also a favorite of birds. To encourage the birds to make a feast of your sawfly larvae, start by putting up a bird feeder near your geraniums.

The birds will come for the feeder, but they’ll stay for the nutritious insect and larvae meal they get from the sawflies and other pests on your plants. Birds are a great way to control insect populations naturally, and bonus, they’re beautiful to watch.

While handpicking or birds may work for a small infestation, large infestations require more drastic methods, like insecticides.

You can use horticultural oil like neem oil. If that isn’t effective, you can use more potent insecticides, either natural or synthetic.

Try spraying the neem oil at least twice a week during active infestations for maximum effectiveness. However, be aware that broad-spectrum insecticides will also kill beneficial pollinators.

You can also try using the same Spinosad we recommended earlier or pyrethrin-based insecticides.

Another tip: try to use insecticidal control methods only before your geraniums start to flower.

That way, it’s only effective on any pests attempting to munch on the leaves and buds of the plant.

If you spray when they’re blooming, it could have a detrimental effect on beneficial pollinators.

Geraniums are susceptible to other pests, such as aphids, greenflies, whiteflies, cabbage loopers (cabbage moth), and cutworms, too.

To get rid of these pests, try insecticide or handpicking. For cutworms, place a three or four-inch cardboard collar in the soil around the base of the plant. This will prevent cutworms from felling your seedlings before they have a chance to flourish.

Another common pest of geranium is deer. They love to much on geraniums and will happily relieve your plants of their buds and leaves.

Geraniums are a popular flowering plant that many people love to put in hanging baskets on their deck, in potting containers on the front steps, or as a decoration, well, anywhere.

They have beautiful brightly colored blooms that can be the pride and joy of your flower garden when they’re properly cared for and thriving.

However, they’re also the favorite meal for many different insects. This includes the two most common culprits, which are geranium budworms and geranium sawflies. They can also be at risk for whiteflies, greenflies, aphids, even deer.

Control methods include handpicking, horticultural oil or insecticide (natural and synthetic), and also sterilizing soil to prevent pupae from overwintering.

Before long, you’ll have beautiful, bright, and colorful geranium blooms with no holes in the leaves or the buds, either. 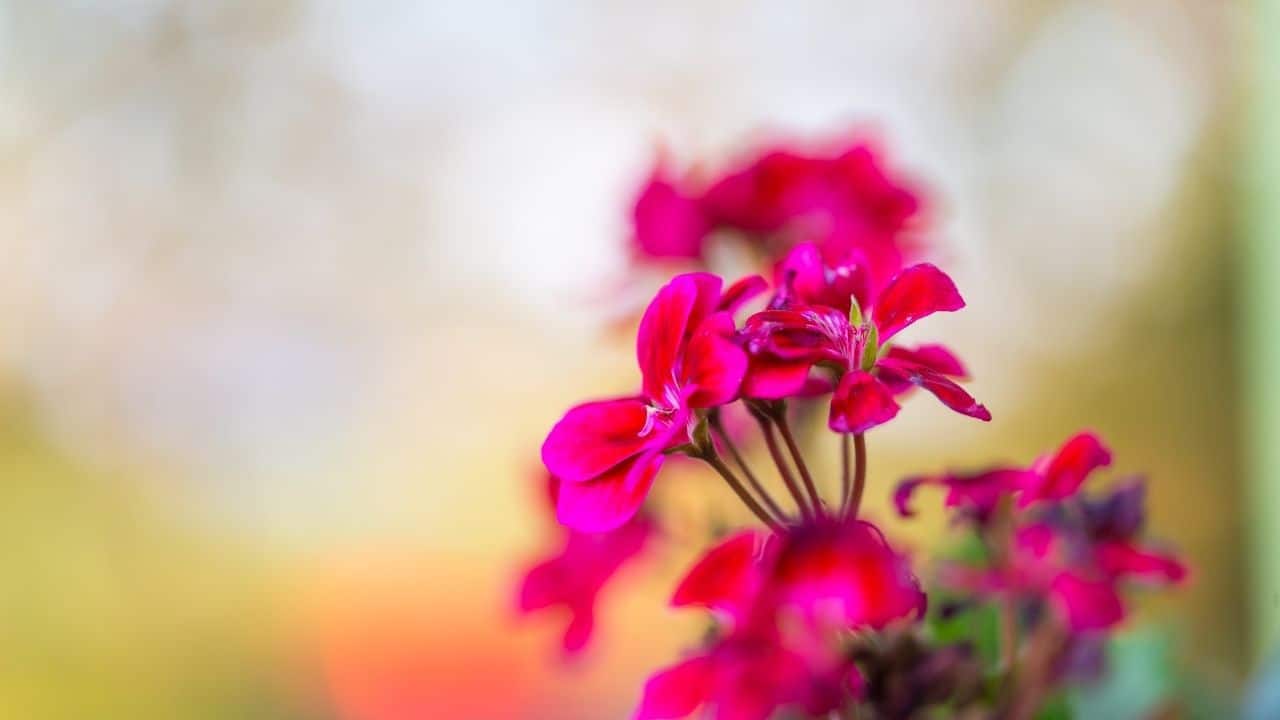