How to Dig Up Azalea Bushes? Do This! 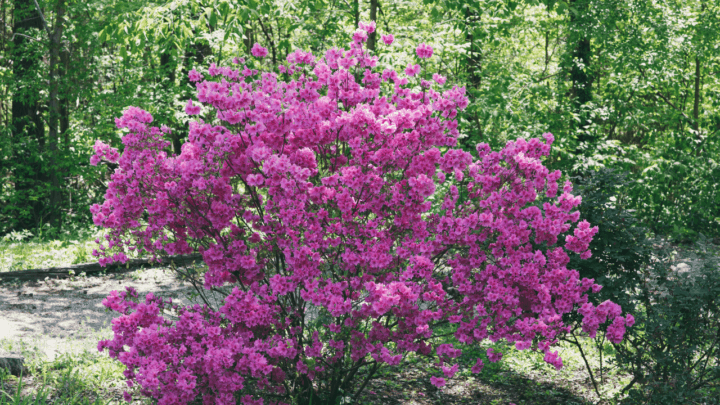 The Azalea Bush grows bright and beautiful flowers. Azaleas come in a number of colors, sizes, and shapes that will brighten your garden or your indoor plant corner.

These bushes belong to the family of Rhododendron.

There might come a time where you want to dig up an Azalea bush. Digging up Azalea Bushes is not tough compared to other bushes and I am going to tell you exactly how you can achieve that.

How to dig up Azalea Bushes?

You might want to dig up Azalea bushes because they are diseased or because you want to replant them. You should begin with digging the bushes by using a spade and pushing it deep into the ground. Now using a spade, remove the soil from around the Azalea bush and expose the roots. Once you see the roots, use both your hands and gently pull the whole plant out of the ground. While you pull the Azalea, ask someone to keep loosening the root system to make your task easier.

Steps to Dig Up Azalea Bushes

The first step is to measure the width of your Azalea bushes before you start digging. For this purpose, walk around your plants and draw a circle around them with a white garden spray or flour.

This will be your guide to know how much and where to dig your plant.

Measure the diameter using a measuring tape, as this will help you choose a suitable spade. When you have the right spade and correctly outlined the diameter, you are ready to begin digging.

Now start to dig into the ground, taking the outline as a guide. It is ideal to dig 1 foot deep (30cm) as the roots of the Azalea bushes reach about this depth.

If possible, dig out a root ball that is this deep. The Azalea root ball should be around half the diameter of your Azalea bush.

Move your spade all around the plant in a circle along the line. While you move your spade, keep it at an angle rather than keeping it straight down.

This is needed as you must break into the root system of the bush as you move around to loosen it up. Once you have dug and loosened the bush from the ground, you will need someone to help you.

Pull out the bush and slightly tilt it to one side and make the other person hold it for you. After this, start breaking into the roots of the bush while your partner pulls the Azalea out.

When you have pulled the whole Azalea bush, gently shake it to dust off the soil stuck on the roots. If the plant is healthy, wrap it in a burlap cloth so that the moisture stays in it and it does not dry out because of the Azalea being out of the ground.

Don’t forget to cover the hole you have removed the bush from with topsoil.

What to Do After Digging up the Azale Bushes?

After you have successfully dug out the Azalea bushes, there are two things you can do with them.

If you dug out the bushes because they were diseased or you have no need for them anymore, you should dispose of them. Simply wrap the bushes in a bag or cloth and throw them out.

On the other hand, if you dug out the bushes because you want to replant them somewhere else. You can transplant the bush in a new environment to help it keep developing further.

For replanting the Azalea bushes you recently dugout, the first step is to dig a new hole in the new place. The new hole should be of the same depth as the previous one but should be twice as wide.

Remember that you should not keep the Azalea bushes out of the ground for a very long time. This will dry out the Azaleas.

Now carefully place your Azalea’s root ball into the hole. Cover the sides of the hole with the right amount of soil.

The new location for your Azalea should be partially shaded and protected from direct sunlight. The soil you choose for it should be well-draining and moist with acidic pH.

During the early phase, the watering schedule for the Azalea bush should be weekly so that it can establishes itself. Once the bush has established, reduce the amount of water so as not to overwater it.

Also, if the bush was replanted in a pot such as a terracotta pot, remember to choose a container with drainage holes to eliminate excess water.

Frequently Asked Questions About How to Dig Up Azalea Bushes

When is the right time to dig Azalea Bushes?

The optimum time to dig oup Azalea bushes is when the flowers drop. If you do this in winter, the bush won’t get time to revive itself and end up dying because of the frost.

Is it easy to dig up an Azalea Bush?

How easily the bush comes out while digging depends on its age and size. Newly planted bushes that are not very big can be easily dug. While the bushes that are old  (around 3-5 years) will pose some difficulties. This is because the plant is fully developed and has strongly adhered to the ground it is in.

What tool is best for digging up Azalea Bushes?

The best tool to use for digging is a shovel. If the shovel is dull use a steel file to sharpen the edges of the shovel. A sharp shovel will easily cut the small roots making your digging task easy. A garden spade will be helpful to dig through the roots that are not easily accessible.

Next
Why Are There White Spots on My Blackberries?
Comments are closed.