Why is My Orchid Wilting? The Roots Hold the Clue! 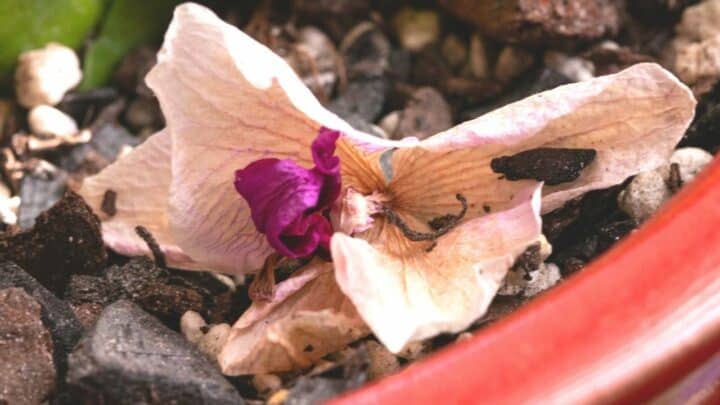 When orchids are in bloom, they put on a spectacular show, but like most things, it doesn’t last forever. They do die off and sometimes wilting is par for the course. Other times, it’s a tell-tale sign that something’s not quite right.

Why is My Orchid Wilting?

A wilting orchid can be a sign of a watering problem. Overwatered orchids wilt, dehydrated plants shrivel. Most orchid species have pseudobulbs that store water making them extremely drought resistant, but also prone to over watering. Temperature, humidity, and air circulation all help maintain a healthy root system, but to keep that up, orchids need to be repotted (usually) every year for it to have sufficient drainage.

An overwatered orchid will wilt. It can be a sign of the soil being so moist that it’s cutting off the oxygen supply to the roots, essentially drowning it.

The vast majority of orchids fair better when they dry out between watering.

Most varieties of orchid are extremely drought tolerant. The reason is they have pseudobulbs, which is essentially integrated water storage. If the soil’s dry, they have a reserve.

There are exceptions, such as the paphiopedilum orchid, which doesn’t have a pseudobulb. When that’s the case, you need to be careful to water only when needed. Every other species… when you think it needs watered, wait another day.

Let orchids use their reserves. Prick the soil with your finger to feel if it’s dry or moist. If it’s dry, water it, and if it’s moist, wait.

The Soil’s Past its Prime

Closely related to overwatering is the potting medium used to grow orchids. If it doesn’t drain well, it’s going to cause the roots to sit in standing water. That causes orchid leaves to wilt, but more serious damage including root rot are risks.

Orchids grown in containers need their potting mix changed. Sometimes, as frequently as every year. Without changing the soil, it’s more likely to compact, then lack the fast drainage orchids need.

The only way to know the potting mix needs changed is to inspect the roots.

That’s easier done if you use a double container for orchids. A plastic, slotted, and transparent orchid pot inside a standard pot with drainage holes is handy.

Simply lift the plastic pot, look at the roots and see what’s happening.

Healthy orchid roots should be a white to green color.

If the roots are dark, it means the potting mix is holding too much water. When that happens, the roots are sitting in standing water and that leads to root rot. When that sets in, the leaves will wilt, droop, and discolor.

A good potting mix for orchids should contain a mix of sphagnum peat moss, coco fiber, fir bark, and perlite.

If you haven’t repotted your orchid in a fresh potting mix in over a year and it’s only now starting to wilt, it’s probably time to repot it.

When you do, consider the size of pot the roots need.

A partial point of repotting in a fresh potting mix is to increase air circulation. If the plant is rootbound, go up a pot size.

High temperatures combined with low humidity causes orchids to lose water through their leaves faster than the roots can get water to them.

The result is wilting!

The preferred humidity levels for orchids is between 40% and 60%. Indoors, over 50% is difficult to maintain without damaging your decor.

Think cracks in the paintwork and peeling wallpaper.

Some methods of increasing a plant’s humidity levels are to mist it frequently, use a room humidifier, place your plant on a tray lined with pebbles, or for better beautification, group your plants together.

Grouping plants works better because it creates a microclimate. Better yet are pebble bases for a group of plants.

In the winter months, when artificial heating is being used, air becomes drier causing houseplants to struggle.

Wilting orchids in the winter months can be the result of just trying to keep your home warm and cozy. Houseplants don’t like dry heat.

It’s natural for orchids to wilt after flowering. You’d expect them to. They’ve just poured loads of energy into blooming.

When they’re ready to rest, they naturally wilt.

Wilted flowers will eventually drop off the plant. It won’t do any harm letting flowers fall off on its own, but if it’s really ruining the plants appearance for you, go ahead and pull it off.

When orchids wilt after flowering, it’s just telling you that the show is over. You don’t need to do anything different.

Something else to note is that when an orchid is in bloom, they do not like change.

If you bought an orchid when it was in bloom, it is likely that the environment change will cause a flowering orchid to wilt early. They prefer the growing conditions to remain the same.

Orchids are fussy towards the conditions they grow in.

Is it possible to revive a wilting orchid?

Absolutely! When an orchid wilts, it’s really just one of two problems. It’s either over-watered, or underwatered. If it’s dehydrated, give it a drink when the soil is dry. If it’s over-watered, that’s a bit more complicated. Overwatered orchids are more likely to have damaged roots. Keep the healthy roots, cut away the dead or dying roots. Repot in a suitable potting mix in a suitable size of pot and then take care of the temperature and humidity to help it grow back healthy.

Should I water when the aerial roots are dry or when the soil is dry?

Always the soil. Never be guided by the aerial roots. Most orchids are epiphytes so they will produce aerial (air) roots. They help nourish the plant, but when humidity is too low, the aerial roots can appear dehydrated. It doesn’t mean the plant needs to be watered. An orchid can have dehydrated air roots at the same time as the potted roots are sitting in moist soil. Don’t let the air roots guide your watering frequency. Air roots help nourish the potted roots (and the rest of the plant), but watering when the main roots don’t need to be watered will cause wilting, and other problems. Dehydrated air roots only need to be misted. Dry potting soil needs to be watered. 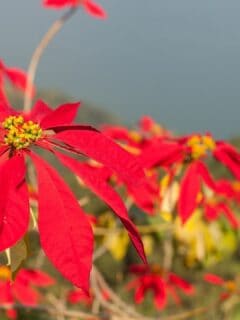