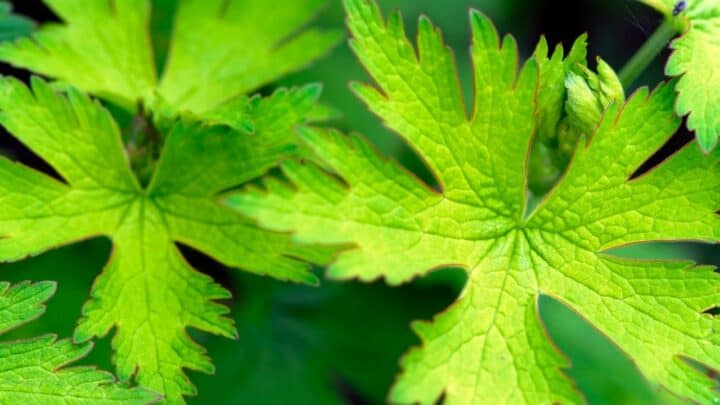 The lush green foliage that surrounds the bright flowers on geraniums makes them attractive. There’s no place for spots on geranium leaves.

The odd yellow spot from edema is one thing. Quite the other is to find brown scabby spots or pale green leaves with light brown dots growing gray fuzzy hair.

Not all spots are diseases and not all diseases are lethal.

Continue reading below to discover the types of spots on geranium leaves, how they’re affecting your plants’ health, and the fixes for each.

Geranium leaf spots start yellow, then turn brown. Without removal, they cause defoliation. Spots on geranium leaves can be indicative of edema, botrytis, geranium rust, alternaria leaf spot, or just be spots caused by the 4-lined plant bug feeding on your geranium leaves.

Geranium rust is a common fungal infection that causes small spots on geranium leaves. The spots start on the leaf’s underside.

At first, they have a pale green color, gradually the geranium leaves are turning yellow, then take a dark brown hue. As they darken, they enlarge.

The fungus is called Puccinia pelargonii-zonalis and it will spread. It’s difficult to identify this fungus, especially during its early stages.

In the later stages (when the spots turn brown) the fungus is easier identified by the brown dots in the center of yellow spots.

You’ll notice the brown centers on the underside of the leaf. On the topside, the texture of the leaf will be rough and it’ll have yellow spots.

If you see yellow spots on the top of a leaf, look underneath it to see if there are pustules forming.

Pustules are like pimples appearing on the underside of leaves. “Pus-tules” get their name because inside the small pimples is pus.

These need to be removed and the plant should be isolated to prevent rust from spreading.

Heavily infected leaves can be pinched off geraniums. Left untreated, it will cause premature defoliation.

A fungicide treatment may be needed if a lot of leaves are infected, but when it’s only mild, pruning geraniums will help increase air circulation, which reduces humidity levels.

Spots on geranium leaves caused by the alternaria fungus can grow to between a quarter to half-inch (0.5 cm to 1.25 cm) in size.

These form in clusters though and the sizes will be sporadic.

The majority of the spots will be smaller than one-third of an inch (roughly 0.85 cm), but these can come together creating what looks like one bigger spot.

On closer inspection, it can be multiple smaller spots grouped together forming a mass.

Unlike rust fungus that has a single brown central spot, alternaria leaf spots have one light brown spot with several inner dark brown rings within the spot. Around the edge, you’ll see a yellow halo forming.

Alternaria leaf spot only affects the foliage, not flowers.

The fungus is saprobic, meaning they cause the leaves to decompose. This infests organic material that’s lacking oxygen, which can be a sign of nitrogen deficiency.

While it will kill leaves early causing dead leaves to fall, spores survive and spread by the wind.

For that reason, infected leaves should be pinched off the plant and discarded. They aren’t suitable for composting.

Heavy infestations may require treatment with a fungicide. Caught early enough, complete removal of infected leaves should prevent it recurring.

Alternaria leaf spot becomes a problem on geraniums when temperatures are cooler for longer resulting in moist soil.

A lack of oxygen (often the cause of nitrogen deficiency) makes this more likely.

For that reason, never be tempted to use a bloom booster fertilizer that has extremely low nitrogen content but a high level of phosphorus, and potassium.

The lack of nitrogen can be the catalyst for alternaria leaf spot.

This goes by different names depending on when you find it.

Bacterial leaf spot needs to be treated before it reaches its secondary stages, infecting the stem roots, leading to wilting and eventually death.

The tricky part is identifying it because the spots are tiny.

These spots start out about an eighth of an inch in size, which is roughly 0.5 cm. The spots are brown and sunken and only show on the underside of the leaf.

Usually, the lower leaves are the first to be affected by the spots. These will wilt first.

If you find them on upper leaves near the tips of stems, it’s likely traveled through the stem, causing stem rot too.

If you aren’t regularly inspecting your plant, you’ll likely miss the first stage and find it when it’s too late.

The bacteria spread from the spots reaching the veins and spreads through the plant fast.

Once it reaches the water-conducting parts of plant tissue, it’ll make its way into the stem where it can then travel throughout the entire plant.

No geranium varieties are resistant to bacterial leaf spot, however, ivy geraniums seem to be more susceptible.

Once identified, prune infected leaves off. The bacteria can survive and it’s often spread easily on pruners or a gardening knife used to cut away infected leaves and stems.

Watering from above will splash bacteria from the fungal spores on spots to other leaves, causing it to spread faster.

In its very early stages, you’ll see brown spots with some slight fuzzy spores surrounding them. The fuzzy part of the spot is the mold.

This fungus spreads fast so if you start seeing clusters of fuzzy gray spots, this is likely the problem.

One of the most common greenhouse diseases is Botrytis cinerea. It can survive on dead plant tissue, tools, and even your workbench.

It favors moist, humid conditions, which is why you’re more likely to experience this when rooting geranium cuttings, or growing from seeds in a greenhouse.

Four-Lined plant bugs are heavy feeders that leave behind the smallest of leaf spots on geraniums and many other ornamentals and vegetables.

The spots are only 2 mm in size at most, but they appear in clusters.

The colors of the spots can be semi-translucent causing green spots to appear darker, a dirty yellow shade, or red spots on leaves.

All the spots will be similarly sized and have smooth edges, rather than anything fuzzy indicating mold, or inner darker spots indicating fungi spore growth.

Spots caused by the Four-Lined Plant Bug are mainly aesthetic causing no real damage to the plant.

Four-Line Plant Bug spots can be easily mistaken for another plant disease given the multitude of spots that appear.

Edema (oedema) is water blisters that form on the underside of leaves on geraniums and other broadleaved plants such as an overwatered Peace Lily,  Ivy Peperomia, and Monstera Adansonii.

The cause is the plant absorbing moisture from the soil faster than it can transpire through the leaves. It’s a physiological problem. The good news is it’s not a disease so it’s not going to spread to other plants. The not-so-good news is that it can be lethal.

These start out as small yellow spots between the leaf veins. The blisters get bigger, turn brown, form a scab, and cause the leaves to yellow. Eventually, the leaves fall off.

Affected leaves can be cut off the plant.

To fix the problem, lower humidity levels, drop back on watering and make sure the soil is well-draining.

Are fungicides needed to treat leaf spots on geraniums?

Depending on the damage, it’s possible to remove diseased foliage for healthy leaves to grow back in. When the infection is from fungus or bacterial infections, it is possible the soil or stems are infected. If the same type of spots appears on new growth, that’s when you’ll need to treat with a fungicide application.

Are spots the same as holes on geranium leaves?

Only one disease exists that causes holes in leaves and that’s shot hole disease. It affects fruiting plants, not flowering plants. Holes on the leaves of geraniums will be caused by insects eating through the leaves. Treat the plant with neem oil or an insecticide because holes in the leaves wound the plant making it susceptible to leaf spot diseases. 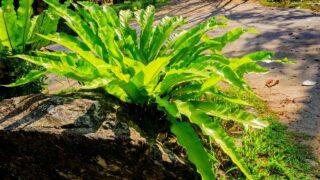 Previous
Why is My Bird’s Nest Fern Dying? - Let’s Find Out! 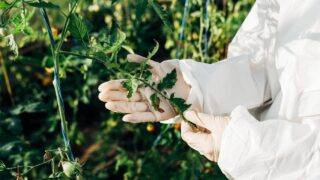 Next
Tomato Leaves Turning Black - Why?