Skip to Content
Monstera Variegata or Variegated Monstera Deliciosa is THE trend in the houseplant community. Variegation means that plants have white or sometimes yellow splashes on their leaves and also variegated sections on their stems and petioles – that’s the stalk where the leaf is connected to –  just to use the botanical correct lingo. 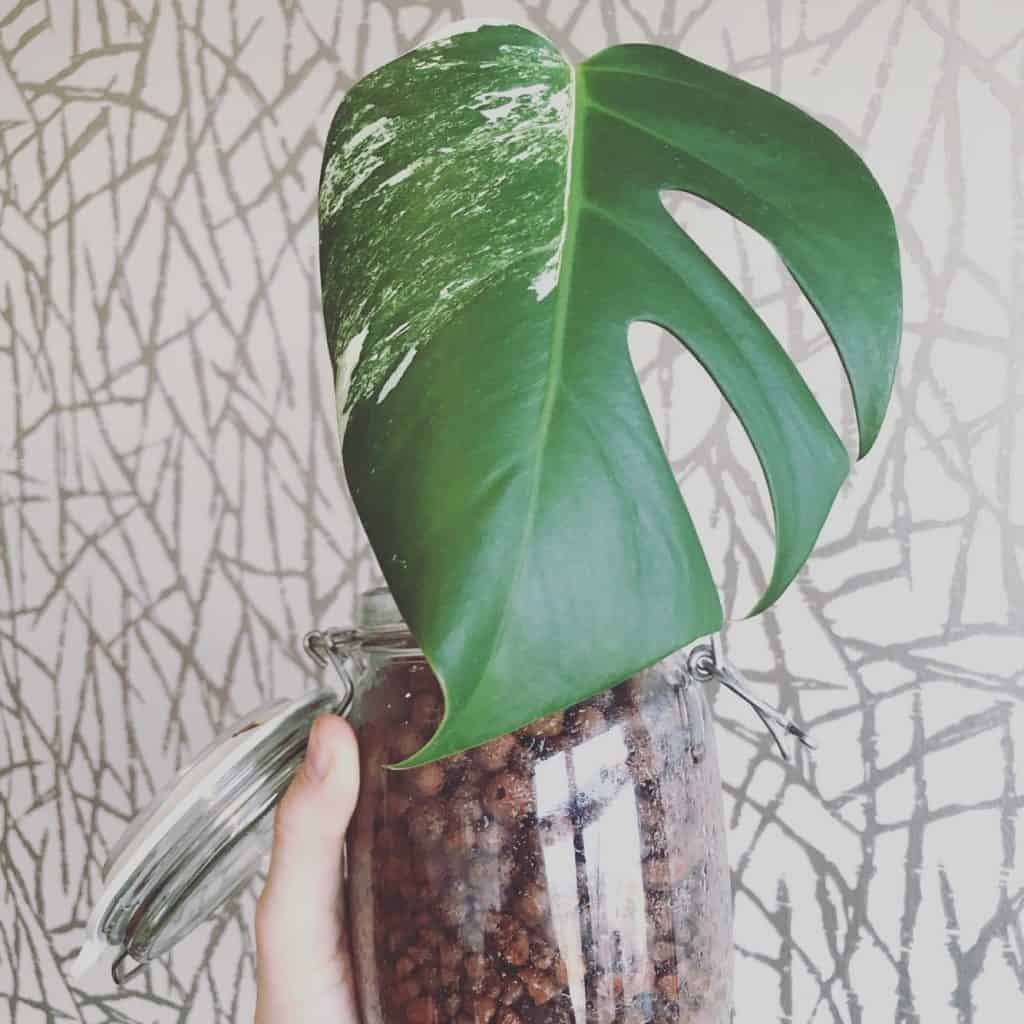 Variegation is different coloured zones in leaves, stems and petioles of plants. As mentioned this happens rarely in nature. Such plants are called chimaera. There are two kinds of plant tissue present in such plants. The variegation can be propagated but both kind os tissues have to be present for the propagation to be present.

Propagation from seeds is not successful in most cases. The white or yellow is caused by a lack of chlorophyll in some plant cells. It is caused by mutated cells. If it occurs randomly it is called chimeric. It can also happen genetically. When it happens genetically seeds and also green shoots from the plant will continue to produce the same colour scheme.

Random mutation is less stable and offsprings and shoots will not produce the same colouring. The random mutation occurs more often than genetic mutation but is generally more difficult to stabilize.

Apart from random and genetic variegation, there is a third form caused by viral infection.

The green colour itself in plants is caused by the content of plant cells. Their content is called chloroplasts. Chloroplasts are needed to conduct the chemical reaction known as photosynthesis. For this process to happen plants absorb water with their roots. Carbon dioxide enters through pores in the leaves into the plants.

HOW DO I KNOW MY PLANT IS VARIEGATED?

More often the cause is either malnutrition or even a disease called Mosaic Virus that is quickly spreading to other plants and usually kills its host.

Well but then: “How do I know that my plant is really variegated?”. The best indicator of a high likelihood of having a variegated plant is if you have bought a plant with variegation.

Variegated Monstera Deliciosas are often offered via the internet. There are multiple sellers on eBay, Facebook and Etsy and Instagram that are willing to part with their variegated specimens or cuttings from them for a hefty price tag.

As we said, variegation is very rare, so your chance of having a plant randomly producing variegation is about 1:100’000. So in order to get a variegated plant from a Monstera Deliciosa, you would have to make 100’000 cuttings and produce new plants.

And let’s remember, this is just the average. So whenever you think you spotted variegation on your non-variegated plants it is most likely something else. But it can and does happen. It’s just not very likely…

Interestingly some plants have stable variegations. As an example, the Monstera Thai Constellation has been created in labs ins Thailand for its variegation and is 100% stable meaning that it will not lose its variegation.

Plants like a Monstera Deliciosa Borsigiana Variegata can lose its variegation and will show more or less variation when growing. It is not uncommon for variegation to completely disappear.

Random Mutation: It is the most common type of variegation and the least stable. When propagation from green shoots or seeds the variegation will not return.

Genetic Mutation: Cells in the white sectors of plants lack pigments and block chloroplast biogenesis at various steps. The cause of this variegation can be caused by nuclear, chloroplast or mitochondrial geneses. White and green sectors can either have the same or different genotypes depending on the plant.

Viral Infection: It destroys color in either leaves or flowers. Often virus-infected plants show variegation in flowers but not in leaves. The virus can be transplanted by cuttings and root grafting but not through seeds. It is not easy to get rid of viral infections in plants. Tissue culturing and extreme heat treatments are two methods to get rid of a viral infection.

White Variegation: This is the archetype of variegation. A good example would be Monstera var Borsigiana albo variegata where albo simply stand for white. Albo from albus is derived from Latin meaning “white”.
Yellow Variegation: A known type of plant with yellow variegation is the so-called Monstera var Borsigiana Aurea Variegata or “Golden Variegated”. It produces green foliage with yellow splashes. Aurea it the latin female name for “golden”.
Venal Variegation: This type of variegation is defined by white or yellow veins in leaves. It is caused by a lack of tissue that sits above the veins.

WHAT VARIEGATED PLANTS ARE THERE?

This is a list of plants available with variegation: 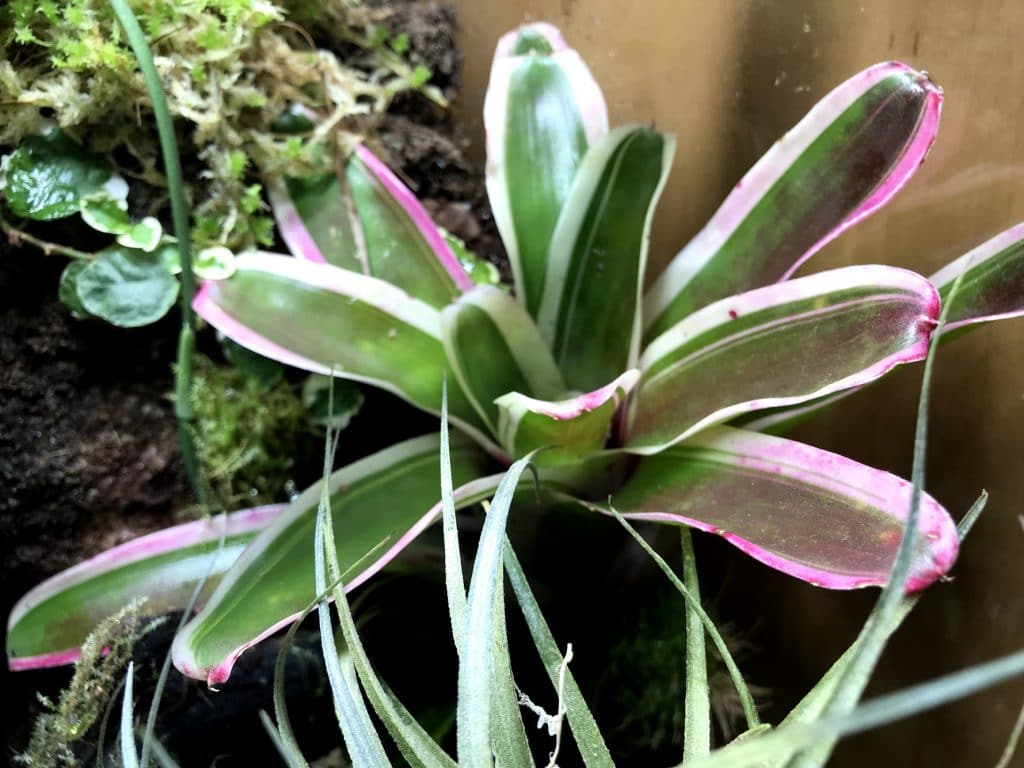 What can be signs of variegation? Let’s find out:

These are the most common signs of a variegated plant:

After having learned what types of plants are known to be available as variegated plants, let’s have a look at the most common questions about variegation in plants:

How can I promote variegation?

How do I increase variegation in my plant?

It is known that cutting back variegated plants to where they had more variegation might helpt to increase variegation in successive growth. Eg. if your Monstera plant is variegated and produces a completely green leaf you can cut it back to the last variegated leaf and hope for the new growth to become more variegated.

How do I avoid too much variegation?

Although variegation is mostly wanted looked for, there can be too much variegation. Completely white leaves contain almost no to absolutely no chlorophyll.

If you are not cutting back such leaves you are risking that your plant is continuing this growth pattern and will at some point not be able to maintain itself due to the lack of proper photosynthesis of green cells containing chlorophyll. You can thus cut back 100% white leaves to the last variegated leaf with green sections and hope for the new growth to be different.

Yes, they do. Variegated plants have less chlorophyll and therefore less surface area that can conduct photosynthesis. They, therefore, need a lot more light than regular plants and grow a lot slower. However, be wary that they are also more prone to get sunburned as the white parts on the leaves are also more sensitive than the green areas.

Can you force variegation?

Yes, in some cases it is possible to force variegation. A good example is the now frowned upon Philodendron Pink Congo. This plant is believed to be produced by chemical induction.

It is said that it will only hold 12-24 months and then revert fully to green but is said to produce bubble gum pink leaves in their new growth. Also if a specific virus is known to produce a certain kind of variegation it can be sometimes used to reproduce the now desired variegation.

Where do I buy a Variegated Monstera Deliciosa?

Your best source to find Monstera Deliciosa Variegata is eBay. Many sellers around the world list their variegated plants there for a good reason. They often sell for rather high prices. Further sources are Facebook Groups, Plant Webshops and Instagram Plant Accounts.

Read about a stunning houseplant that looks great even without variegation. It is called Begonia maculata and has white dots on the upper side of the leaf and a red back.