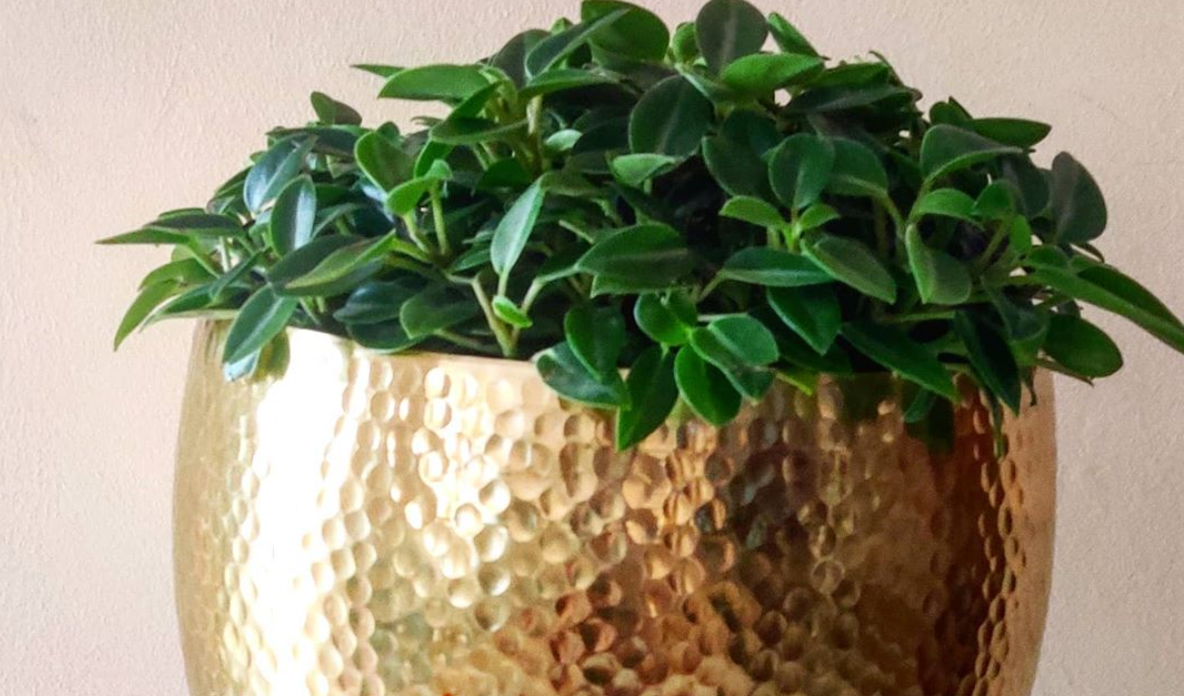 Every plant has a role to play in my garden. Some plants are show stoppers, like my Hoya Latifolia.

Some plants are indoor accents, like my Iron Cross Begonia, some make great centerpieces like my Anthurium Plowmanii, while yet others texturize the background like my Begonia Obliqua.

Peperomia Trinervula has a unique role in texturizing the foreground in my garden, and that is a very important aesthetic function to have!

Peperomia Trinervula Care entails using a well-draining mix using peat, compost, mulch or humus, bits of bark, and some drainage material such as pumice or perlite. It grows best in bright indirect light and temperatures between 60 – 80ºF (16 – 26ºC). Water Peperomia Trinervula as you would water a succulent only once the soil is completely dry. Keep humidity at 40 – 50%.

It’s a fast-growing vine with small and fleshy lance-shaped leaves and red-tinted stems.

I’ve grown several pots of it as it branches beautifully and fills out odd spaces readily. I even grow Peperomia Trinervula as a bushy topsoil cover for some of my tall and lanky potted plants and it trails off the edges quite nicely.

A versatile plant native to Venezuela, Trinervula in my opinion deserves more attention than it receives compared to other species in the Peperomia family.

Peperomia Trinervula care is centered around treating it like an epiphytic semi-succulent and it will do well. 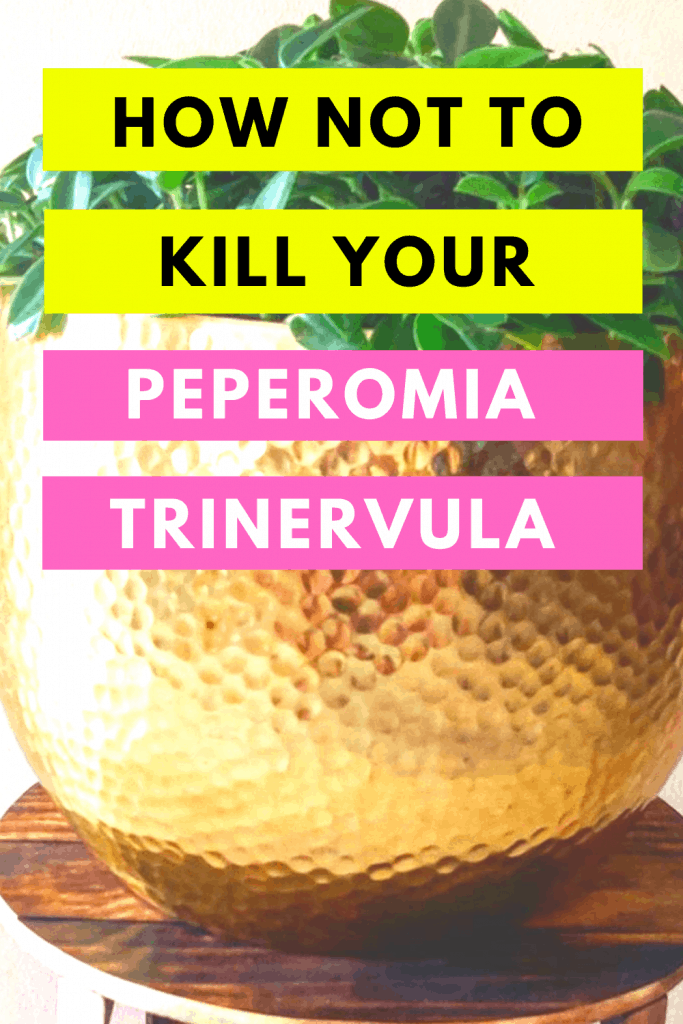 Peperomia trinervula care like other varieties in this species is governed by its epiphytic nature drawing nutrients from the air, rain, water, or from debris accumulating around it.

You need to grow Peperomia trinervula in a  well-draining soil mix dense in organic nutrients and very porous.

This is to ensure that the roots breathe and excess water leaves the pot very quickly without accumulating at the bottom. Finally, the organic matter retains moisture whilst keeping the roots warm and humid.

A combination of peat, compost, mulch or humus, bits of bark, and some drainage material such as pumice or perlite makes for a great mix.

An effective Peperomia trinervula care hack is to get a high quality succulent mix from the store and add perlite for extra aeration.

If you can, try to grow Peperomia trinervula in slightly acidic soil with a pH ranging from 6.0 to 6.6.

Pro tip: throw in a single layer of pebbles or gravel or kiln-fired brick bits in the bottom of the pot. This is great for drainage and also allows for easy damage-free transfer during repotting.

Being a green-leaved variety, Peperomia trinervula care needs plenty of light exposure, but also must be protected from direct rays.

These are outdoor plants that love well-lit situations but wilt in direct rays, especially in summer. If you grow Peperomia trinervula as an undercover or huddled in the midst of other plants, that sort of arrangement works great to filter the rays.

Peperomia trinervula care is made easy by the fact that the plant tries to communicate with you. Watch your plant closely for signs like dull pale leaves or leggy growth, which means too low light, and sudden drooping or burned leaves, which indicates direct sun.

For proper Peperomia trinervula care, first, get the soil conditions right. Once you’ve nailed the well-draining porous texture of the soil, make sure there’s less of the soil mix altogether. Now you’re ready to water the plant.

The right moisture balance for Peperomia trinervula care is to water deeply and dry out the soil partially between waterings. Pinch the top 1-inch of the soil to check if it’s completely dry before watering again.

This is the best way to avoid root rot caused by overwatering and/or poor drainage. The most common cause of death of this plant is waterlogging.

A word of caution: a lot of internet material will advise you that peperomias like moisture. This is a misleading statement because peperomia varieties differ widely in their care requirements.

Peperomia trinervula care resembles that which is given to succulents. They can hold water very well in their fleshy stems and leaves.

You should grow Peperomia trinervula in moderately warm environments. It prefers temperatures ranging from 60 – 80ºF (16 – 26ºC).

If you live close to the equator you can grow Peperomia trinervula outdoors throughout the year. Otherwise, it’s best to grow them in pots and bring them indoors in the colder months away from the cold drafts.

Peperomia trinervula care can get tricky in cold weather countries. It is not a temperature tolerant tropical plant; I’ve had no success with it when temperatures go below 55ºF (13ºC). The fleshy plant dies down rapidly.

One Peperomia trinervula care tip is to keep it away from drafts of air-conditioners and heaters. They stress easily under extreme temperature fluctuations.

In summer months an occasional wash down of the leaves is advisable. Just make sure you do it on a watering day and only in the mornings.

For indoors, you don’t need a humidifier unless it’s desert dry in your growing room. The plants take well to occasional misting with soft water, especially during dry weather.

One Peperomia trinervula care hack it to stick to an organic feeding routine. Include rich organic manure in the soil mix and to replenish the topsoil in the growing months.

I am personally not a fan of chemical fertilizers for epiphytes but if you have been using them in your garden, you could go for a triple diluted solution than what’s prescribed. So, for example, if the Rx ratio is 5ml per gallon of water, make it 5ml per 3 gallons of water.

My Peperomia trinervula care schedule includes a balanced succulent fertilizer (which I pick up from a local store) once a month during growing months and I stop feeding the plant in winter months.

The most interesting part of Peperomia trinervula care is propagation. Almost every part of the plant propagates readily.

I’ve seen that accidentally broken leaves or stems if left undisturbed in the soil readily take root. It is easily propagated from leaf cuttings, stem tip cuttings, and plant division.

You can grow Peperomia trinervula to about 7 inches tall after which the erect stems start trailing. It spreads as wide as you want it to trail.

This plant is a medium to fast grower. Under the right conditions, they cover the ground quite fast. By right conditions I mean warm equatorial weather. In the colder zones growth will be slower.

Because of its wonderful branching habit it gets the compact bushy appearance very soon. You can even prune it to encourage branching.

Be sure to propagate the cutting. The flowers of the Peperomia trinervula are spiky green and quite inconsequential although when the whole plant is covered in spikes in the flowering season it does look interesting.

Peperomia trinervula doesn’t mind a cramped potting condition as with most epiphytic succulents. But don’t mistake this to mean tightly packed soil – it’s quite the opposite.

The root systems of these plants are relatively small, so in relation to their size, they don’t need large pots.

The roots bind themselves well to the soil mix. The stems are delicate and tend to break while repotting. Therefore, I prefer not to repot this plant at all. Instead, I propagate abundantly.

If a plant looks overgrown in its pot I simply carry out a plant division and separate it into two of three different pots.

This is similar to the above leaf cutting method. Many online gardening stores just sell plant tips for home propagation. Just take a healthy stem tip with 3 to 4 leaves and follow all the remaining steps as above.

As the Peperomia Trinervula is a succulent type plant, sap sucking bugs or pests could be an issue. We’re talking mealy bugs, aphids, scales.

Some of the other common problems seen when you grow Peperomia trinervula are listed below:

Fading Dull Leaves: If you grow Peperomia trinervula for its deep green foliage this isn’t something you want to see. It’s probably due to low light. So move the pot to a bright spot.

Leaves dropping off suddenly: There are a couple of reasons for this.

Firstly, if your Peperomia trinervula is exposed to cold draft the leaves will fall off. You know what to do next. Immediately bring the plant indoors.

Secondly, I would immediately check for a root rot indicated by the base of the plant being soggy and dislodged from the roots.

An important part of Peperomia trinervula care is watering and soil. If the plant is young there’s, unfortunately, little you can do to save it. If it’s a mature plant with several branches, salvage healthy stems and repot them in a sterile airy mix.

Stunted growth for months: It may be time to repot with more nutrients. Add a balanced soil supplement for foliage plants or succulents and improve lighting conditions.

Leaf edges burn: Either direct sun exposure or chemical salts in the water can burn up the leaves. Using RO water helps not just peperomia but all delicate houseplants in general.

Leaves discolour and plant is slow growing: Yellowing of leaves is a typical sign that the isn’t getting enough nutrients. Give it a light balanced fertilizer to improve the NPK levels for a few weeks. Using rainwater regularly is also helpful because it’s full of minerals. If it’s a mature plant, you can repot it with a lot of good slow-release organic manure.

When you grow Peperomia trinervula, think succulent, and chances of success will definitely improve.

Is peperomia trinervula a succulent?

The plant has leaves that are slightly thick like succulents, but they are essentially epiphytes. Most of their needs are like succulents with the difference that they need more humidity than succulents. Certain other varieties of Peperomia however have even more succulent-like features.

How to grow Peperomia trinervula to look bushy?

Peperomia trinervula is a low growing trailer and doesn’t get tall. If you want a bushy look propagate it using the node rooting method I’ve detailed in the propagation section. I’ve had great results twirling the stems back into the soil inducing more shoots to spring out from the sides improving the volume of the foliage.

Can you grow Peperomia trinervula under artificial light?

They can grow under fluorescent light kept on for about 12 hours a day.

Peperomia plants are safe for humans and animals. They do not bring any harm if ingested. However, it is best to keep them away from children and pets.

One thing I have often felt when I grow Peperomia trinervula is that it is so ‘giving’, and yet not attention-grabbing.

Despite having thrown in several pots of this plant all over my garden people rarely stop and ask me what it is.

It’s not exactly a specimen plant, but one that no home gardener can do without! The glue that holds all your great exotic garden species together by greening up the gaps. 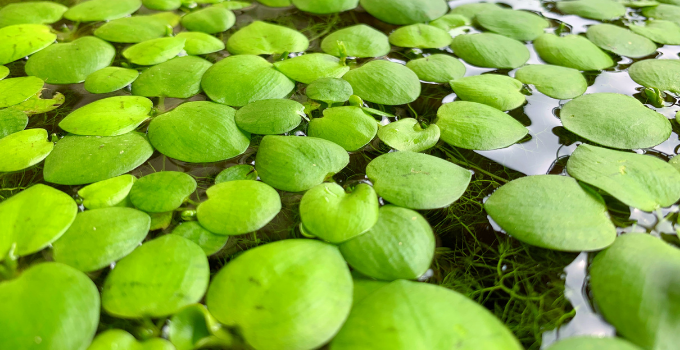 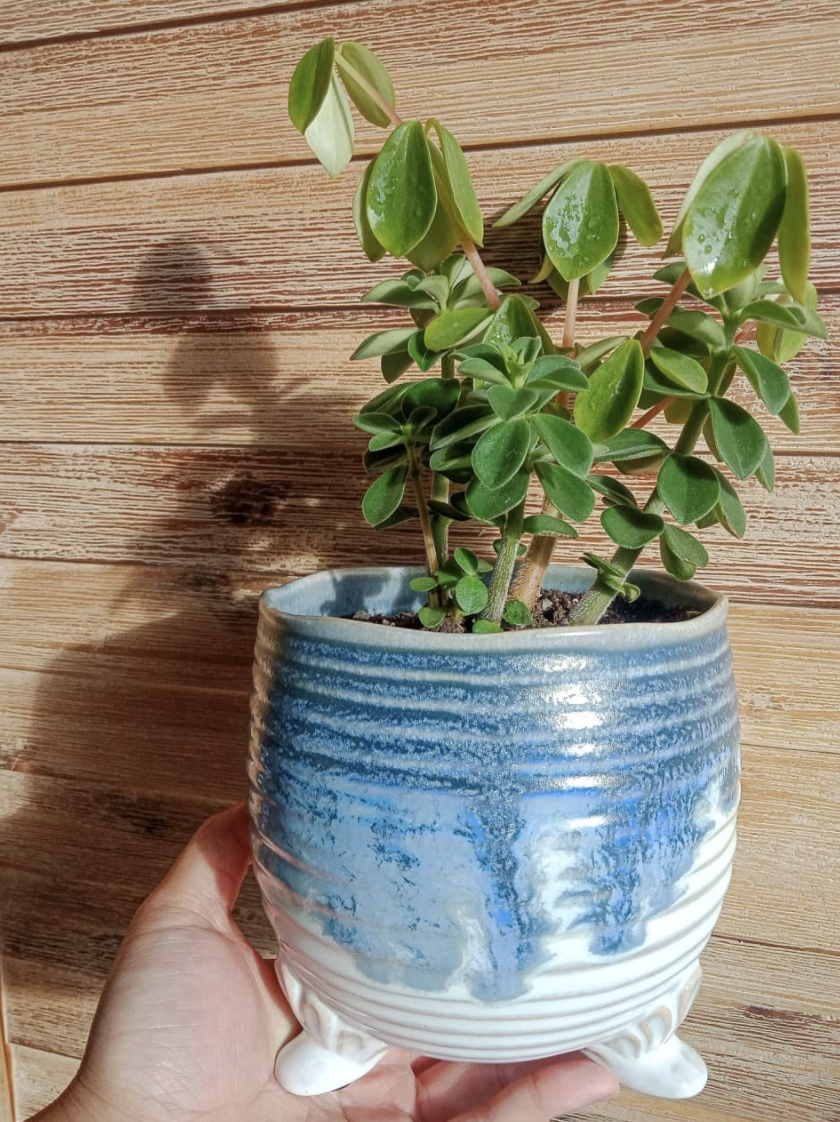