Who knows what goes through a cat’s mind, ever? What delusions of grandeur are brought to the fore when you establish a palmate jungle in your living room?

It is probably comforting to know, when your feline friend inexplicably takes a bite out of a dangling palm frond, that the indoor environment you have created is safe from toxins.

You may, however, need to assess whether your palm is safe from the cat!

Are palms toxic to cats?

Most palms that are commercially available as houseplants are non-toxic to pets. The exception is the Sago Palm which is not a palm at all but a cycad. All parts of this plant are toxic to the point of being potentially fatal to your cat. Even humans need to wear gloves when working with a Sago Palm. There are other palm-like plants, such as Dracaenas and Yuccas, that also contain toxic substances that are harmful to cats. 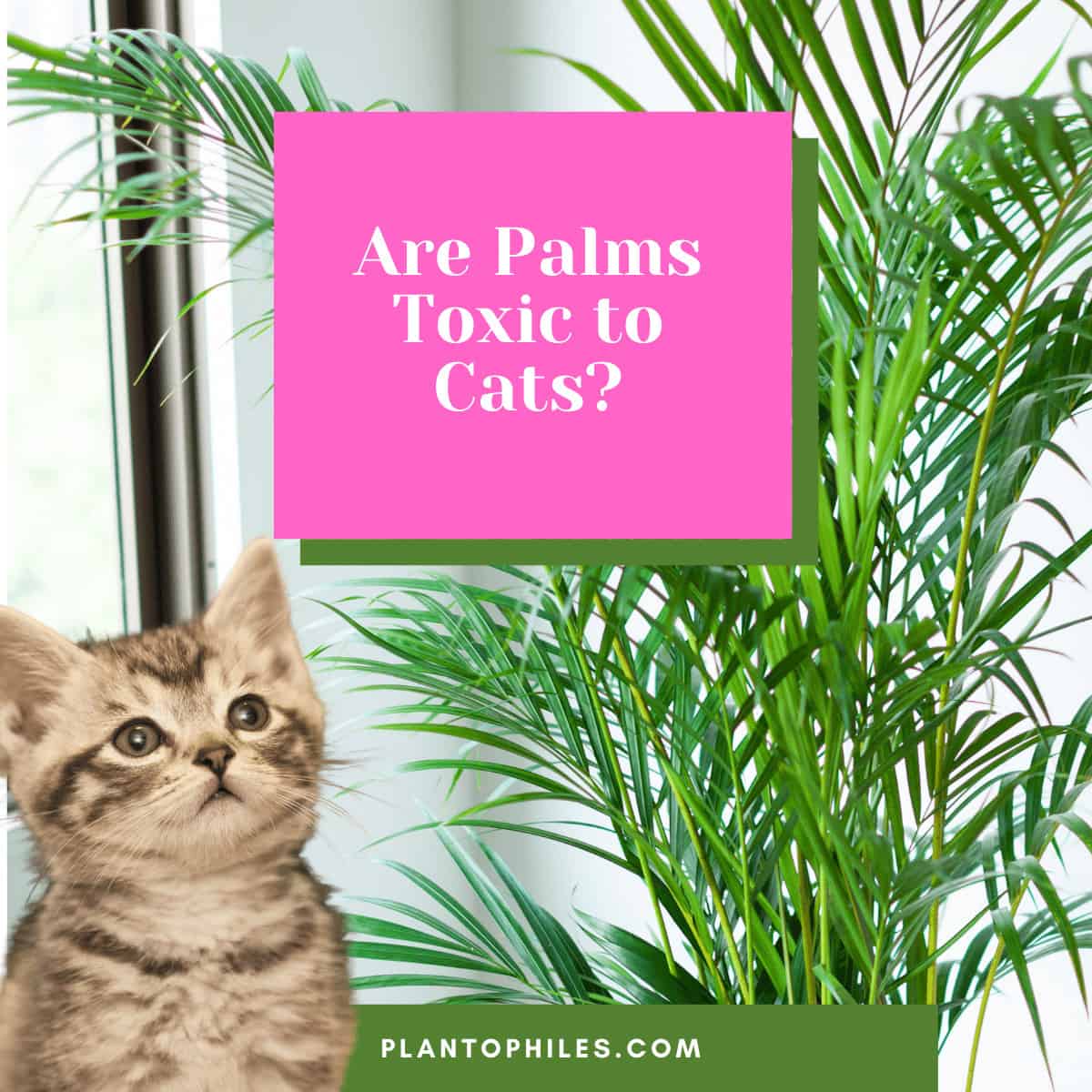 Are Palms Toxic to Cats?

The attraction of palms

Images of palm trees are synonymous with dreams of being marooned on an island paradise. When you are snowbound, one look at a healthy indoor palm that will transport you thousands of miles to the sun and sandy beaches of the tropics.

Interior designers use the image liberally to create a relaxed atmosphere. The prevailing trend of the 2020s, so far, has been botanical prints, with palm leaf graphics much sought after.

No doubt your cat has similar thoughts. A bored cat will see the fronds as playthings. The slightest air movement will transform your plant into prey.

The leaves look and taste like grass and your cat may even be tempted to take a bite to settle its stomach. They do eat palm fronds. Evidence has been found in litter trays.

Thankfully, most palms that are commercially available are less of a danger to your cat than it is to them.

Popular garden palms that can be dangerous for cats

Several of the larger palm species will grow easily in the warmer zones of North America.

Examples include the Pheonix and Washingtonia or Mexican Fan Palm.

As young plants they develop defense mechanisms against predatory animals.

Spikes and thorns of varying lengths form on the fronds, and even the fruit. The razor-sharp leaves are capable of inflicting serious injury to human and animal flesh.

Although the spiky exterior should act as a deterrent for any curious cat, some have been known to ignore these obvious cues and climb up palms or forage in the fallen leaves.

The spikes invariably harbour fungi and other harmful bacteria which will spread infection through any open wound.

These palms are difficult to prune, but it is essential that this be routinely carried out. Falling leaves are heavy and have sharp edges.

Heavy palm fruit also poses a danger. Some seeds weigh up to 50 pounds, and have been responsible for damage to property.

The fruit of the Caryotas or Fishtail palm is smaller but toxic enough to cause skin irritation when handled without gloves or tramped on barefoot. If consumed they will cause abdominal distress.

Dangerous palm look-alikes that cats should stay away from

The Sago ‘Palm’, also known as the Coontie or Cardboard Palm, is not a palm at all but a cycad. It has a large, untidy stem and relatively few, stiff prickly fronds which point upward. It does not flower but produces fruit and seeds.

It is a slow-growing plant that can grow to 15 feet outdoors, in the right environment. Sago Palms make attractive houseplants and are popular with bonsai enthusiasts but need to be kept well away from curious cats and other small inhabitants of your home.

Seen from your cats’ viewpoint, the trunk may be attractive as a scratching post but the leaves are prickly and largely stationary so would not have any allure. The seeds however are shiny oval objects that could spark curiosity.

Even in its tiniest form, every part of the plant is toxic to man and beast, the seeds being the most toxic part. They contain cyasin, a carcinogenic and neurotoxic substance, that induces vomiting, diarrhea, seizures and liver failure.

The severity of the poison’s effects will depend on the pet’s age, overall health, and how much it has ingested, relative to its size.

The irritation in the digestive system can cause severe dehydration, and impaired liver function can cause permanent systemic damage, over time. It is not a given that the poison will cause death but it is best to consult a vet as soon as possible.

Dracaenas are popular houseplants. There are over a hundred varieties, some of which resemble palms.

The leaves are toxic to small animals.

They contain a bitter substance called saponin which, fortunately, causes the leaves to be unpalatable. This substance is found to varying degrees in a number of plants, including soapwort which is used to make soaps. It is not toxic to humans.

The effects of saponin poisoning are similar to those of the cyasin in Sago Palms.

It is advised that you contact a vet immediately if you suspect the cat has eaten any leaves and is exhibiting any symptoms. If addressed early, the treatment is straightforward.

There are yucca plants that have a similar appearance to palms when they mature. There are 40 species of yucca, and many are popular as house and garden plants.

Unfortunately, they are toxic to cats and dogs, for the same reason as the Dracaenas. The leaves contain the steroidal substance, saponin.

Read the full list of plants that are toxic for cats.

Frequently Asked Questions About Are Palms Toxic For Cats

What is a good palm to grow indoors if you have cats?

There are 10 species of Lady Palms, which originate from the Asian Pacific, that are beneficial for cat-run households. They are more compact than the more popular palms and are non-toxic.

Their overriding property is their ability to absorb ammonia in the air. In other words, they neutralize the smell of kitty litter.

They could be placed near the cat litter tray and effectively do away with any unpleasant odors in the area.

What other popular houseplants are toxic to cats?

Dieffenbachia and Philodendrons, together account for over 500 species of plants, several of which have been cultivated as houseplants. Included in these is the ever-popular, Monstera Deliciosa.

Sadly, they are a danger to humans and pets.

They produce toxins in their sap, known as calcium oxalates. These in turn form ‘raphides’, which are small, spiked structures.

Dumb Cane and Mother-in-Law’s Tongue may give clues as to the effects of this substance.

If taken in by mouth, the substance will cause small abrasions, irritation, and subsequent swelling of the tongue and the area around the esophagus. This could lead to difficulty breathing and possibly respiratory distress.

Treatment includes washing out the mouth and eating a soothing snack such as ice cream or frozen yogurt to counteract the irritation.

If the toxins come into direct contact with the skin, they will cause irritation and a burning sensation. Washing or rinsing the area thoroughly will alleviate the symptoms.

You do not want to get this substance in your eyes!