Philodendron Goeldii requires moderate sunlight that falls indirectly. It likes to grow in moist sphagnum moss or peat-based soils. This plant prefers humidity that is above average (higher than 60%). It grows well at temperatures ranging from 50-86 degrees Fahrenheit (10-30 degrees Celsius)and doesn’t like to be in cold weather areas.

They tend to grow without any limits and can be grown indoors and outdoors in USDA hardiness zones 9-10. As Philodendron Goeldii matures, it develops vines that use other plants to help them grow in the upwards direction.

A few easy steps for Philodendron Goeldii care will transform it into a healthy plant, and this guide would help you understand your plant better. 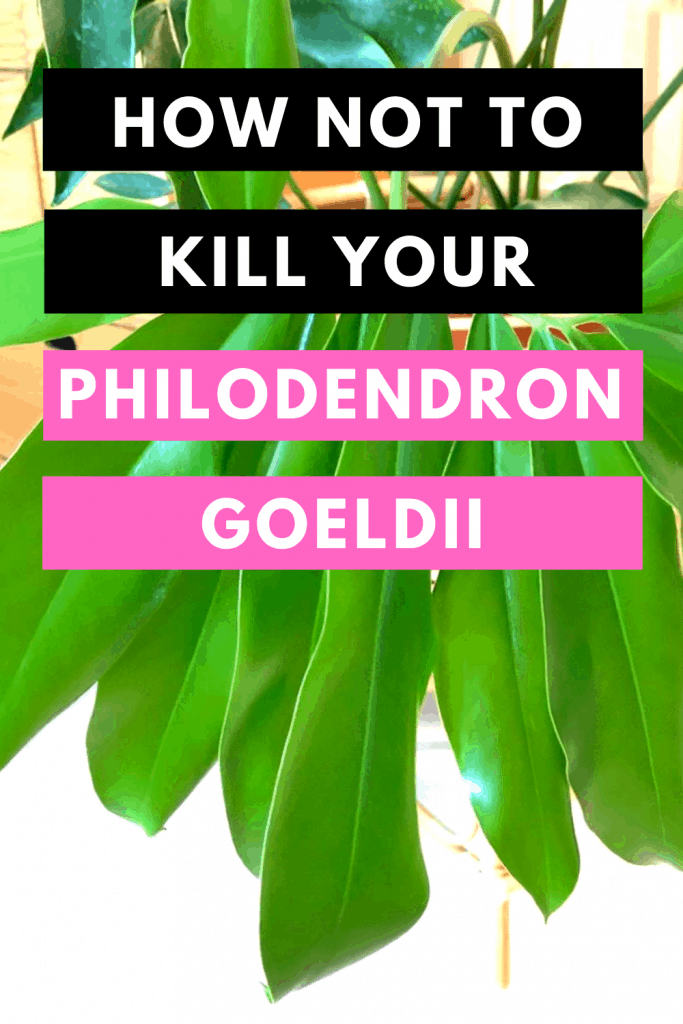 Philodendron Goeldii prefers to have its soil moist as well adequately drained. The soil must contain organic matter, for example, sphagnum peat moss.

The sphagnum peat moss consists of decaying matter and dead insects, which has extraordinary qualities that would help retain water and maintain the soil’s pH.

The soil pH must range from 5-8 for their healthy growth. The soil must be slightly acidic or slightly alkaline; otherwise, a mishap would affect the plant considering the sphagnum is also acidic.

Watering should be done twice a week, and whenever you water, try to make sure there is a break between the watering for the soil to dry and absorb the water.

In the growing stage, since Philodendron Goeldii prefers moist soil, it means that the soil is to be provided water until fully saturated, and you can see the moisture with the eye on the surface.

Philodendron Goeldii just like most plants, is sensitive to overwatering. Overwatering may lead to root rot.

The best position for the Philodendron Goeldii to receive the required light would be near a north-facing window or the doors where there is little light.

While in winters, in case the Philodendron Goeldii is grown outdoor, make sure to take it inside but provide adequate sunlight.

But make sure Philodendron Goeldii is not exposed to low temperature; otherwise, there is the risk of wilting or leaf drops.

This also applies to the Philodendron Goeldii, who are placed outdoors or those in the garden.

For Philodendron Goeldii, keep in mind that they grow well in moist soil, which means that the humidity level must be high. Anything ranging from 60%-80% in the morning and night is acceptable.

Ensure this with a humidifier or by placing it in a tray filled with water.

For the maximum growth of their lush green leaves, the best solution would be to use medium-balanced fertilizers with a ratio of 10:10:10 of nitrogen, phosphorous, and potassium.

But if your plant needs some extra nutrition, add manure considering its rich in organic matter.

Make sure to provide fertilizer once every month, especially in summer and spring. While in winter, it’s best to stop giving the fertilizer to Philodendron Goeldii.

The pot should be larger than the previous pot, approximately 2,3 inches larger. Make sure the new pot is big enough to settle the soil and root ball adequately. Also, make sure the soil is well-drained.

Pruning Philodendron Goeldii is not necessary, considering they don’t take up space. But if you want to do pruning, then make sure to do it lightly. This would help to make the plant bushier and full of life.

Only cut out the yellow leaves or the infected ones.

Some leaves indicate their health; make sure you prune the unhealthy ones. Pruning can be done at any time of the year for Philodendron Goeldii.

Several techniques allow us to grow Philodendron Goeldii quickly, like layering and cutting techniques that will enable us to carry propagation.

Another method would be layering; there are different types of layering that can be used to propagate your Philodendron Goeldii. I’m going to discuss a few ways which are widely used.

Philodendron Goeldii can also be propagated via seeds, but this is rarely done since the seeds are not easily accessible. But if you want to try this method, make sure you remove the seeds from the inside when the fruits have fully grown.

Plant them in the soil. It can be done at any time of the year.

Philodendron Goeldii can grow up to a height of 8 inches (20 cm) and a width of 4 inches (10 cm). With proper care and nutrients, you will see the result in beautiful lush green leaves that grow in a spiral.

Philodendron Goeldii grows annually but is intolerant to too much direct sunlight and cold winters.

Excessive sunlight would burn the leaves, while in winters, they cannot withstand lower temperatures as they would wilt.

This must be one of my most easygoing plant. I really just placed him and left him in a corner without much care. Once the statement plant of my home, he was replaced by my alocasia and displayed in a corner. Never one to complain, he has been growing at his own pace amidst low light setting and sometimes forgotten watering schedule .This is a tribute to plants like him and also to people we sometimes take for granted and kind of forget. By the way, check out those leaves decked out like a spiral wheel on one petiole. Think I will need to show him off again at a more prominent corner. ? #philodendronfriday #philodendrongoeldii #thaumatophyllumspruceanum #philodendronfanatic #aroidaddicts #philodendronfanatic #urbanjungle #urbanjunglebloggers #houseplantplantclub #plantsmakepeoplehappy #instaplants #houseplantcommunity #planttherapy #plantlover #greenthumb #houseplantplantclub #instaplant #indoorjungle #apartmentbotanist #livingdecor #house_plant_community #apartmenttherapy #sgplants #sgplantslover #plantpeoplesg #sgplantclub #plantsareamazing

It is a common disease amongst all the plants. Leaf drop occurs due to several reasons, including having a shock from being repotted or even transported from one place to another.

There is also seasonal change as plants become vulnerable during the winter season.

Dry weather can also cause leaf drop. Due to Philodendron Goeldii plant being humidity lover, it needs moisture, so if not provided, that would affect the leaves. And finally, some pests and diseases can also cause this drop.

To prevent it, it is best to give them their essential care.

Root rot is a disease that tends to grow in damp soil, and its main target is the plant roots. They tend to shorten the life span of the plants. Wet soil causes a decrease in oxygen intake, weakening the bases and allowing root rot to spread to the plant.

The second cause is when another fungus is present, contributing to spreading the root rot to the plant. The damp conditions allow providing support to the fungus, which then does its work.

The Philodendron Goeldii can be saved by restricting yourself from over-watering the plant, and the soil must be well-drained so that there is no room for the root rot. Chemicals like methyl bromide should be used to prevent it and finally prune the infected ones to eliminate the rot.

Mealybugs are also common as they are small, soft-bodied insects, and they are visible to the naked eye with their white appearance in clusters. They suck the juices of the plant and cause wilting of leaves, fruits, and flower buds.

They produce honeydew that forms a sooty mold fungus and invades the plant to destroy it. Use neem oil and insecticidal soap on the plants to keep them safe. Otherwise, wash them with water if the bugs are not significant in numbers.

Aphids are small insects that travel from one plant to another. They are also visible by the naked eye and can be seen on the plant stem in clusters. They cause damage by secreting honeydew and drinking from the plant sap.

This sugary content again leads to the formation of the sooty mold fungus. Which then cause the dropping of leaves, dead stem, and flowers. To keep Philodendron Goeldii safe, use neem oil and insecticidal soap on the leaves.

Spray water onto the leaves to wash them away. Chemicals can also be used to spray on them but make sure the plants are not sensitive to them. Then prune away damaged parts or use the help of rubbing alcohol.

Spider mites are tiny creatures that are not spotted easily on the plant. But their symptoms are seen as holes present on the leaves, or there are dead yellow spots on the surface. Spider mites are usually seen as red, black, or brown.

To prevent them, make sure to provide the leaves with enough water and humidity in the air to stop these insects from growing because they thrive in dry conditions. Otherwise, use the help of neem oil and insecticidal soap for their treatment.

There are two types of scale insects that we need to be careful of. One would be hard-scaled while the other one would be soft-scale. The hard-scale are the most difficult to remove as they cover themselves with a layer to protect themselves from other insects.

To keep the plant safe, use the help of rubbing oil on the leaves, use a sponge’s service, and then wherever you see a scale insect, dap on it and make sure to clean away the plant after they’re killed—Cut away the stems of plants where they are present in large groups.

Philodendron Goeldii is toxic to both pets and humans.

Coffee ground is a good remedy as Philodendron Goeldii is a slow-growing plant. It would help to boost their growth.

How to make Philodendron Goeldii bushier?

Philodendron Goeldii would require the help of pruning. Try to cut the end of the vines; this would make the plant look neater and also make them bushier as well.

How long does it take Philodendron Goeldii to grow?

Philodendron Goeldii roots would start growing properly after ten days, but the time could be extended to three weeks. But it must be provided with proper care and attention for fast growth.

Philodendron Goeldii can take full sun but also needs shade. Excessive sunlight can even burn the leaves, so it’s better to provide direct daylight for a limited time.

Philodendron Goeldii is a fascinating plant that is easy to grow and take care of. This is a rare species, also called Tree Philodendron, because it develops a trunk and sheds the lower leaves with time.

The leaves would grow and expand upwards as they tend to look aesthetic in your room.

The gigantic leaves with the spiral growth pattern would provide a unique appearance. This plant would make anyone happy with its fresh tropical look and fulfill your dream of an indoor jungle.