While good raspberry planting advice is plentiful, it can still be hard to find tips that are specific to where you live.

When it comes to planting, growing, pruning, and harvesting raspberries, the right season for completing these tasks varies depending on your location.

Although you may have come across information on pruning raspberries, you may still wonder whether it applies to the climate where you live.

When To Prune Raspberries in Washington?

Since approximately 60% of US-grown raspberries are produced in Washington State, you are certainly not alone in your quest for information about pruning raspberries in the Northwest.

Fortunately, you’ve come to the right place to learn when to prune the specific types of raspberries that you’re growing in Washington State.

When to Prune Raspberries in Washington

If you live in Washington State, prune your raspberry bushes early in the spring. When pruning, identify and remove the canes that aren’t sprouting buds or growing. But, if your raspberries are everbearing, you can still prune the top portion of the canes in the fall after a summer harvest.

Just leave the bottom half of the raspberry bush alone, as it will produce berries again the following summer. Summer-bearing raspberry varieties need to be pruned at the soil line after harvest. 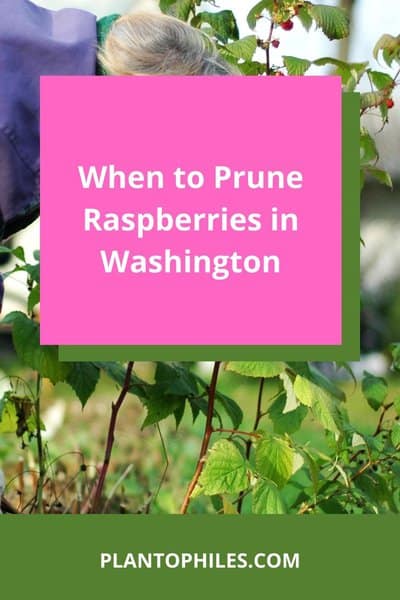 When to Prune Raspberries in Washington

Washington Raspberries Should Be Pruned in Early Spring

As a standard rule, raspberries should be pruned in Washington State between late March and early April.

When doing your annual pruning, you should remove any canes that are dead, weakened, or thin and leave the most vivacious canes for the upcoming harvest. 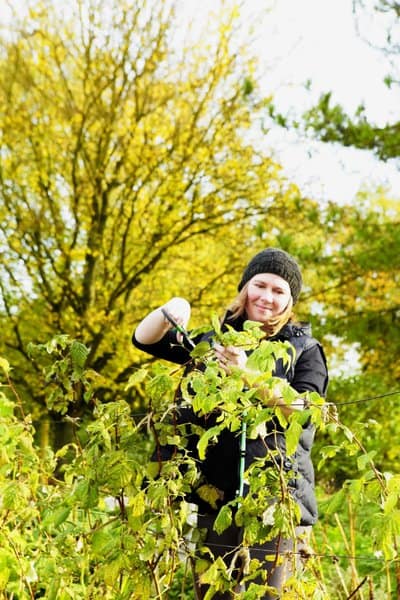 The dead canes could prevent sunlight from reaching the lower canes that may still be thriving, and the canes could become overcrowded.

Overcrowding results in the canes competing for vital nutrients, such as sunlight and water, which is why pruning is an absolute necessity.

Additionally, the moisture and shade produced by overgrowth create the perfect environment for mold and fungi to develop on your raspberry bush.

You should also remove any canes that are no longer budding or continuing to grow. These are usually the canes that have produced a recent harvest.

Although many people may mistakenly try to keep these canes as they are obviously fruit-producing, it’s best to make way for new canes to grow and produce berries the following harvest.

Everbearing Raspberries Can Be Cut Back in Late Fall

Washington home gardeners either grow raspberries that are ever-bearing or summer-bearing.

If you are growing an everbearing raspberry cultivar, such as Autumn Bliss, the timing of pruning works slightly differently.

Now, there are some gardeners out there that would advise cutting the canes of ever-bearing raspberry bushes down to soil level after that first especially amazing fall harvest, but doing so would naturally eliminate the possibility of a second — albeit not as stellar — harvest the following summer.

In the end, that’s your call to make, but why wouldn’t you want to enjoy a second harvest of delicious red berries?

Sure, the quality of the berries may be somewhat diminished by the summer harvest, but they are still sweet and juicy, nevertheless.

If you’ve decided that you’d like to preserve your ever-bearing raspberry bush for a second harvest the following summer, then you should only prune the top portion of the cane immediately after the fall harvest and allow the rest of your raspberry bush to continue to produce berries again in June. 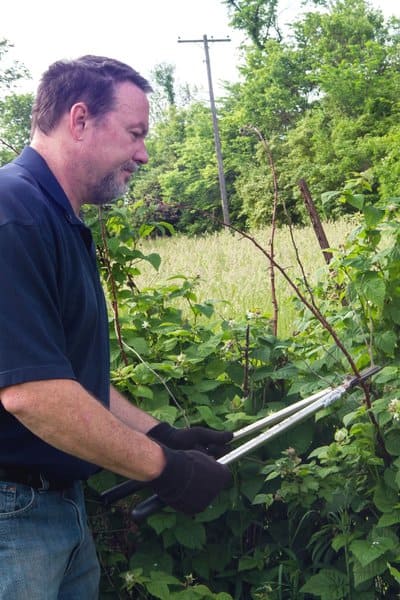 Summer-Bearing Raspberries Should Be Pruned After Harvest

On the other hand, if you are growing a summer-bearing raspberry cultivar, such as Summer, you should go ahead and prune the canes down to the soil line immediately following the June harvest. 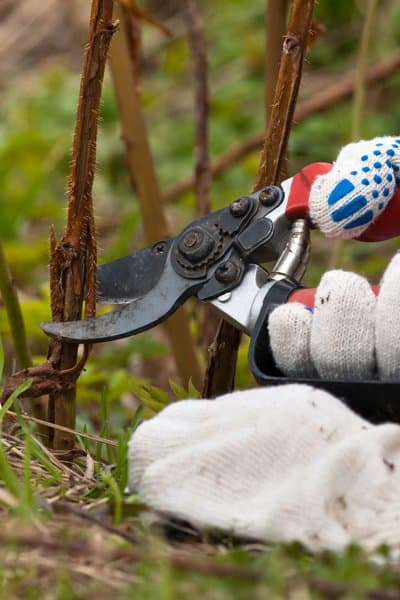 Summer-bearing raspberry cultivars only produce berries once in the summertime. After that first harvest, they’re essentially worthless.

So then, where does that recommended spring pruning come into play?

If you have any new raspberry bushes that have not yet come into harvest, they should be pruned early in the spring to prepare for the upcoming summer harvest — regardless of the cultivar.

Naturally, you don’t want your raspberry bushes to experience overgrowth amid spring rain and increased sun exposure after winter dormancy.

Spring is the ideal time for pruning as it falls between the winter dormancy period and the usual summer harvest.

The entire purpose of pruning is to ensure the health and prosperity of your raspberry bushes by allowing the thriving canes access to vital nutrients and reducing the risk of damaging fungi, which are prone to developing during the increased spring moisture.

It’s hard to imagine a better time to care for raspberry bushes than shortly before harvest.

Frequently Asked Questions about When to Prune Raspberries in Washington

How do you grow raspberries in Washington?

Raspberries need to be planted in full sunlight and thrive well when grown in a shallow hole set on a raised bed. The raspberries should be fertilized 4 to 6 weeks after planting.

What is the best way of pruning raspberries in Washington State?

When pruning summer-bearing raspberries in Washington, you should remove the canes at soil level following harvest. Then, in early spring, prune away the dead or weaker canes to strengthen and prepare the plant for that year’s harvest.


Afterword: When to Prune Raspberries in Washington

Finally, you landed in the right place for information on pruning Washington raspberries and were hopefully able to sort out the confusion as to the best time for pruning.

Washington State has a unique climate that supports the growth of many different raspberry cultivars, so pruning times depend on the type of raspberry bush that you’re growing.

Now, you’ll be able to enjoy a fresh batch of juicy red raspberries next harvest…and they may even be healthier and plumper than your neighbor’s raspberries.