Gardening can easily be placed on the back burner when you have a busy schedule, which can lead you to wonder whether your raspberry bush really needs to be pruned.

Surely, you already have enough on your to-do list. But what happens if you don’t regularly prune your raspberry bushes?

By the way, raspberries need full direct sun to thrive according to Minnesota University.

If you are still uncertain enough to ask these questions, then you’ve come to the right place.

If you don’t prune your raspberry bushes, they’ll continue to grow and produce fruit, but the resulting overgrowth results in the canes competing for sunlight and nutrients, which may cause the lower portion of leaves and buds to die as they block out the sunlight from reaching the thriving canes. 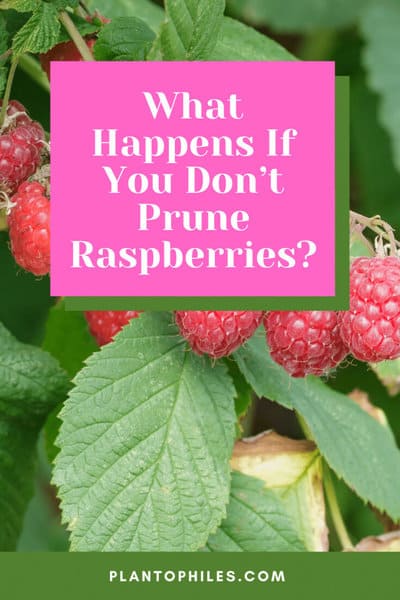 Any dead canes will take up unnecessary space and block sunlight from reaching otherwise thriving canes. Additionally, overcrowding can negatively impact air circulation, which can lead to the development of mold and fungi. Ultimately, you’ll have a less vigorous raspberry harvest.

Initially, the thought of an overgrown raspberry bush may not sound all that bad, but overgrowth doesn’t mean that the plant will produce more juicy red berries.

Actually, the opposite is true.

Once the bush becomes overgrown, the canes will start to act like their own worst enemies, as they compete with one another for sunlight, oxygen, and water.

Eventually, the top half of the plant will flourish, while the lower half will wither and die.

If the upper portion of the plant was already thriving, it would continue to do so, but you would lose out on any fruit that could’ve yielded from the bottom half of the plant.

But if the top half of the plant was dying or consisted of weaker canes, sunlight may not be enough to save the plant, and not pruning could possibly cost you the entire harvest… 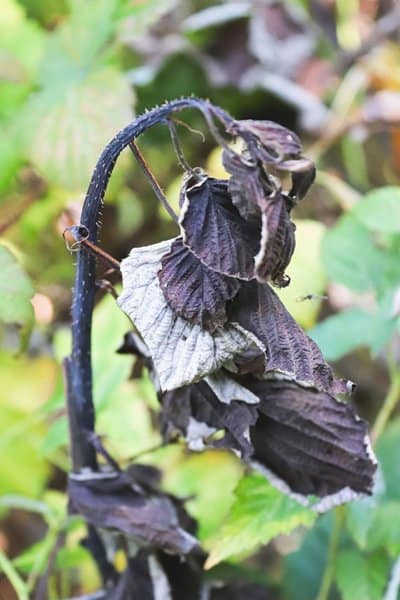 Of course, the strong will survive. It’s a fact of life…in most cases.

If larger dead canes are on the top half of your raspberry bush, these canes could prevent the thriving canes below from receiving the sunlight that’s needed for their continued growth.

Although it’s already too late to revive the dead canes, they inadvertently continue to receive most of the sunlight, while the canes underneath slowly die, too.

Eventually, you could lose your entire bush!

And all this could’ve been prevented had you pruned away the dead canes.

Mold and Fungi May Grow on Your Raspberry Plants

Sure, it’s already a given that plants are subject to the development of fungi, but failing to prune your raspberry bushes only further increases the risk.

Mold and fungi are known to thrive in dark moist climates, and the resulting overgrowth from not pruning your plants produces the ideal conditions for mold to grow. 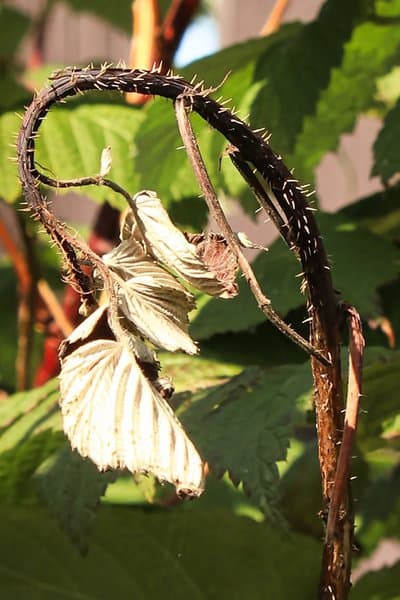 The overgrown leaves of unpruned raspberry bushes keep moisture trapped underneath and prevent sunlight from reaching the bottom half of the plant, which could easily lead to the growth of fungus and the potential loss of your raspberry bush.

The Raspberry Harvest Will Be Smaller

If nothing else happens as a result of not pruning your raspberry bush, you can at least expect to have a much smaller yield of juicy raspberries when it comes time to harvest your crop. 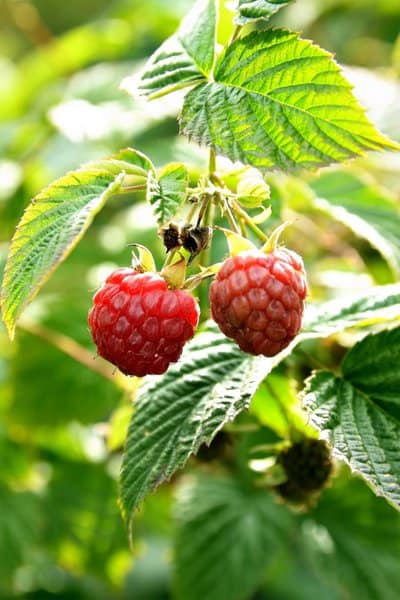 Since the overcrowding canes would’ve been competing for nutrients throughout the growing season, it’s only natural that some canes may not make it to harvest.

Aside from the weaker canes not surviving or producing fruit, many other canes which would’ve otherwise thrived will also die from lack of nutrients.

If the canes on the top half were already dead and blocked the sunlight from reaching the rest of the plant, you might be left with few raspberries – if any – at the time of harvest.

The raspberries that you are left with may not be as plump and juicy as they would’ve been had you cut away the weaker and dead canes, so the surviving canes could’ve received adequate nutrients.

Looking back, you’d realize that pruning would’ve been well-worth fifteen minutes of your time, as well as learning the best methods how to propagate raspberries.

Why Raspberries Need to be Pruned

The mere fifteen minutes that it takes to prune your raspberry bushes every year is vital for the health and well-being of your plants.

While you will need to wait until the following year anyway before seeing anything more than foliage, removing the dead and weaker canes is beneficial for your raspberry plants and increases the annual yield of your crop.

Where pruning results in a healthier bush and a more plentiful harvest, failing to prune your raspberry bushes comes with consequences.

Sure, the plant will continue to grow, but the canes will become overcrowded, which can cause your raspberry bushes to experience a whole range of problems.

When should you cut back raspberry bushes?

Raspberries should be pruned annually to prevent overgrowth. It’s recommended to prune raspberry bushes early in the spring, approximately two weeks after the summer crop has been harvested.

Do you need to cut back raspberry bushes in the fall?

Although it’s tempting to remove dying canes in the fall, it’s best to hold off on pruning until after winter as these canes can help the bush survive winter dormancy.

What’s the best way of pruning raspberry bushes in the summer?

Summer raspberries should be pruned by removing the small weaker canes and cutting off only the tips of the longest canes.


Afterword: What Happens if You Don’t Prune Raspberries?

Although you may indeed have a busy schedule, you should try to squeeze in time for pruning your raspberry bushes or hire someone to handle this task for you.

Failing to prune your raspberry plants could result in a much smaller crop or could even lead to fungi killing your plants.

Fortunately, raspberry bushes only need to be pruned once a year, so this isn’t a time-consuming ordeal.

Enjoying a full harvest of sweet raspberries is well-worth the hard work and effort of annual pruning.