Propagating your own plant is a great feeling, especially when it is an attractive plant like the Philodendron birkin.

With a sharp knife, some water, and the correct potting soil, you will soon be propagating your own Philodendron birkin.

How to propagate Philodendron birkin

Propagating Philodendron birkin can be done in three ways. The first is taking a stem cutting with a node of the plant and putting it in water so that roots develop, then planting it in soil and allowing it to grow. The second is to split a pup from the main plant and to plant that to grow on its own. The third way is air layering and consists of allowing aerial roots to grow by splitting the stem and cultivating the roots from that incision.

When you want to propagate your Philodendron birkin, you must decide what method you will use.

Making a stem cutting is possibly the easiest and certainly the most common, but read on, and you will be able to choose a different and more interesting for of propagating your Philodendron birkin. 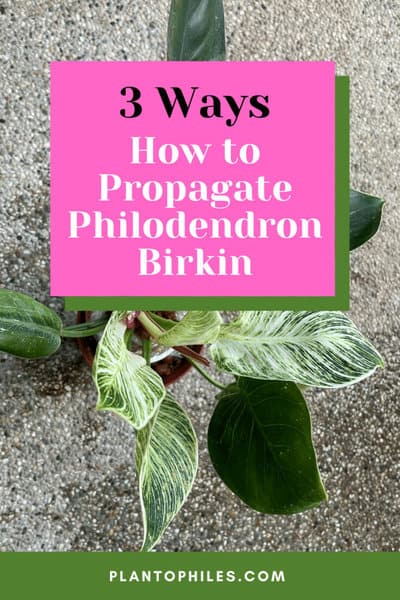 How to Propagate Philodendron birkin

How to propagate Philodendron birkin – 3 Different Methods – Step by Step

When you are going to propagate any new plant from a cutting, you must work with a healthy, growing plant according to Purdue University.

Use a sharp cutting tool, or a knife to cut the piece.

Sterilize it in boiling water for about five minutes, to avoid putting any germs onto the plant, which can affect both the original plant and the cutting. 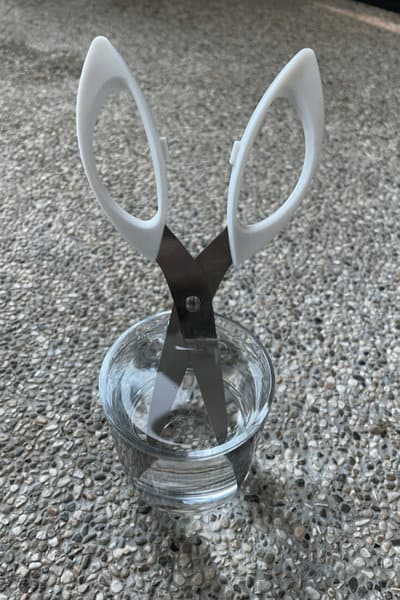 Sterilize the scissors, or blade 5 min in boiling water

Alternative methods to sterilize a blade are to use rubbing alcohol or by putting the blade in a flame for a few seconds whilst moving the blade back and forth.

To make a cutting, choose a stem section and make a mark about an inch (2.5 cm) below the growth node (out of which the leaf grows). Make another mark above a growth node bout 10 inches (25 cm) above the bottom mark. 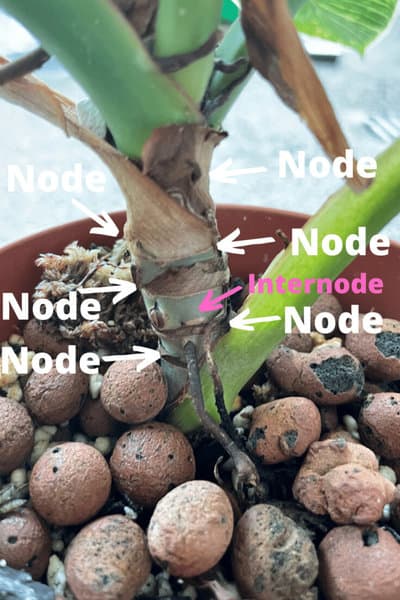 This is where the nodes are on the Philodendron birkin stem

This only works if you are working with a mature Philodendron birkin. The nodes usually are very close together and a less established Philodendron will not have that much stem to work with. But this is no problem as long as you have a node. The cutting itself can be just 1 inch or even less (2.5cm).

On the other hand the larger the stem and the more nodes you have the higher the chance of success will be. If one node is node activating another will do.

Cut the stem at the two marks. Make sure it is a clean incision. Cut diagonally, to increase the surface area of the cutting.

This way you will get two cuttings. The tip cutting as well as a stem cutting of Philodendron birkin.

You can propagate Philodendron birkin with a tip cutting but also the stem cutting itself will work.

If you only want to do one cutting you can just cut the tip section below a node. A node is necessary for propagating Philodendron birkin. Without a node the cutting will not turn into a new plant.

Leaves on the stem are optional. If the cutting has a leaf or two it will develop quicker into a new plant. But you can also propagate a stem cutting without a leaf. 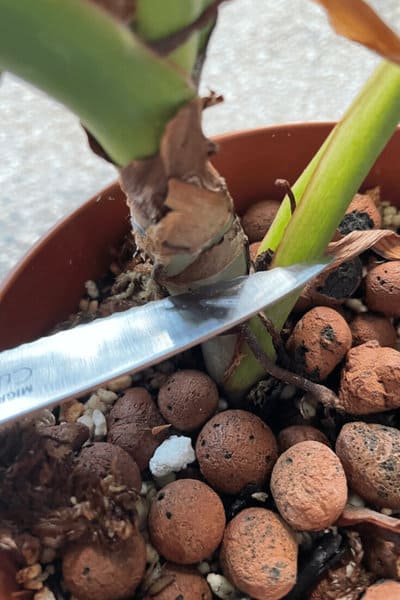 Philodendron birkin stem cutting with a node and leaves

Take off the lower leaves of the cutting, making sure that the growth node is clear. Put the cutting into clean water in a vase or container. You may need to suspend it by supporting it on a wire mesh cover over the jar it is in. 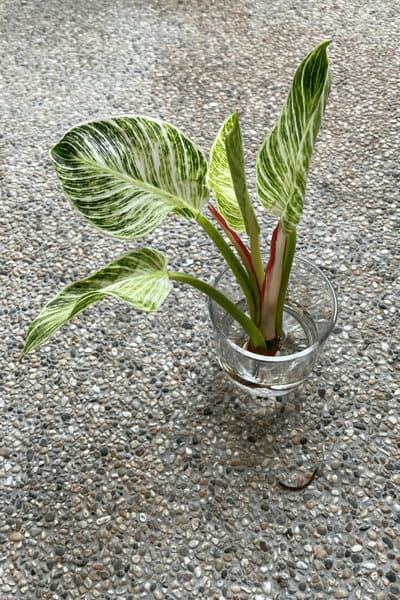 Alternatively at this step, you could also use Sphagnum moss or even soil as a medium for the Philodendron birkin cutting. Sphagnum moss works great if you put dry moss into the water and let it soak. Then you need to take it in your fist and press the Sphagnum moss really hard. This way it will be moist but not soaking wet.

You can also put your cutting directly into the soil. This method however is not recommended for the beginner as you cannot see the cutting and you will be left in the dark regarding what happens in the soil. After 2-3 weeks you should try and start to pull the cutting gently. If there is any resistance you have an indication that roots are starting to form.

Leave the cutting in the water until you can see roots begin to grow. This may take 2-4 weeks. During this time, make sure that the water remains clear, by replacing it at least every 2-5 days. 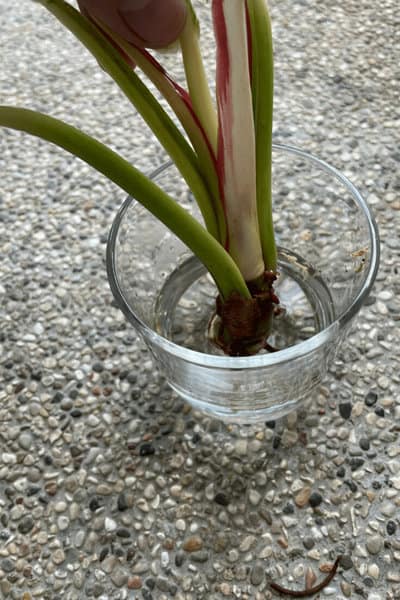 Step 4: Plant the plant into a pot with potting soil

Once the cutting has developed roots that are at least 2-4 inches long (5-10cm) you can put the cutting into the soil. This is usually when the main roots get additional smaller roots coming out of the sides of the main roots. 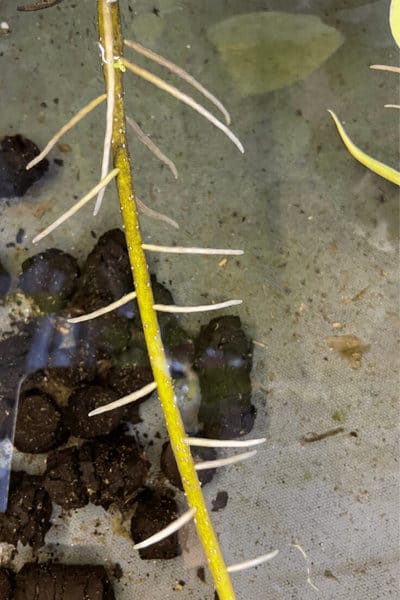 Prepare the pot or bed into which the Philodendron birkin will be planted. Choose a small pot that is suitable for the cutting and fill it with aroid soil using perlite, peat moss, charcoal, orchid bark, and some potting soil.

Take the cutting or leaf out of the water and shake off the excess water very gently. Make a hollow in the soil about 4 inches (10cm) deep and 2 inches (5 cm) wide. Put the cutting gently into the hole and cover it well.

Don’t tamp down the soil, but make sure the plant is standing firmly. Water the new Philodendron birkin after 24 hours. I do not recommend watering immediately as any damage to the roots has a chance of turning into root rot when wet. This way any damage has at least 24 hours to callous over. 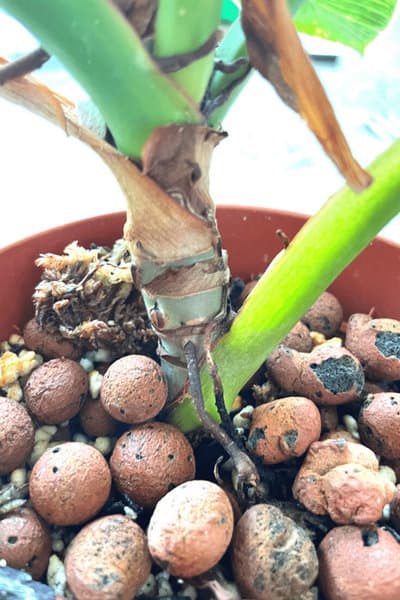 2. Propagation by dividing the plant

You can only divide a Philodendron birkin to propagate it if the plant is healthy and growing and has a side shoot or pup developing.

Keep an eye on your Philodendron birkin and wait until it sends out a smaller plant or pup. You should wait until the new section is quite established before dividing it.

Step 2: Remove the plant from the soil

Dig very gently around the roots of the plant, with a fork and your hands. Carefully remove the plant from the soil, roots, and all. Very carefully use your fingers to run through the roots, removing as much of the soil as possible.

Find where the pup and mother Philodendron birkin plant are joined at the roots. Very gently, pull the two parts apart. If necessary, use a sharp, sterilized cutting tool or knife and cut gently between the two parts, separating them carefully.

Replant the mother Philodendron birkin in the original spot. Make sure the roots are covered with soil and that it stands firmly.

You can put the pups into the water until the roots have strengthened. You can also rather put it straight into the soil in a pot. Make sure that roots go deep enough and that the plant is standing firmly. You will need to keep the pups damp for about 3 weeks until it is really established.

Using an air layering technique to propagate a Philodendron birkin means making an incision in the stem, so it is important to use an established plant with a substantial main stem.

Step 1: Make an incision in the stem

With a knife, make an incision in the side of the stem. It should be about 1-inch (2.5 cm) long and reach nearly halfway through the stem. 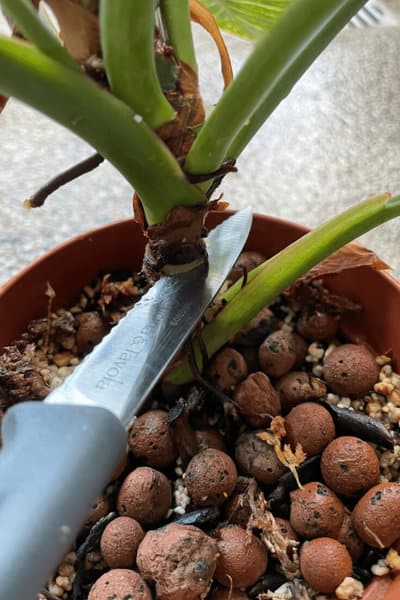 Make an incision on the Philodendron birkin stem

Use a very thin twig, or even a toothpick, and put it into the incision to keep it open. 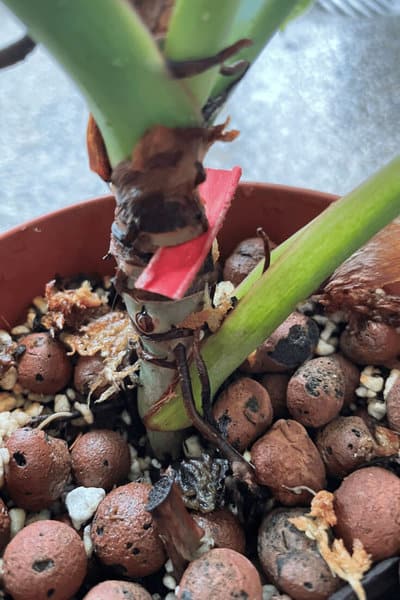 Pack damp pet moss or sphagnum moss around the stem over the incision. You can use a plastic cup to keep the peat moss in place. 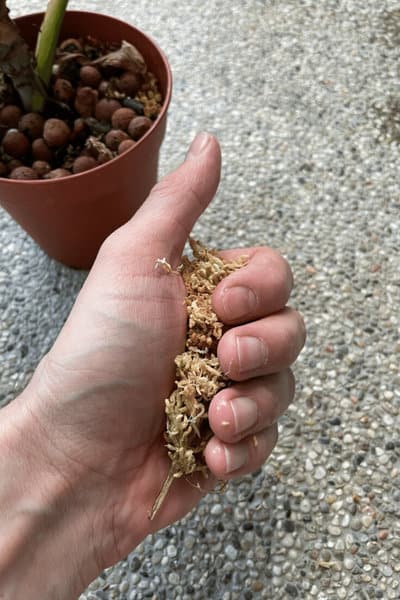 Cut the cup in half along one side and cut a hole in the bottom that will fit snugly around the stem. Place the cup around the stem below the peat moss or Sphagnum Moss. 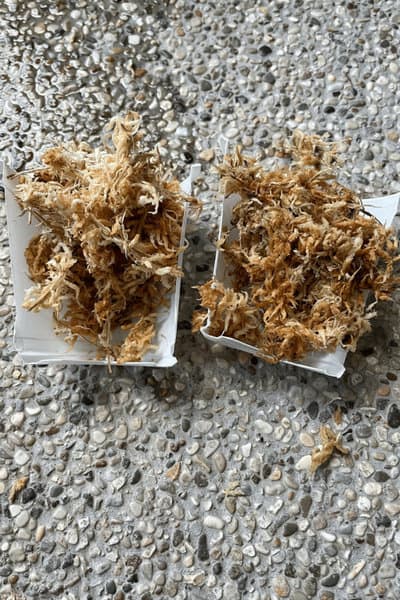 Leave the plant for 3-4 few weeks, until you see roots growing out of the peat moss. Remove the cup and moss and cut away the new plant. This can be planted into a pot. Make sure the roots are covered. Keep the soil damp for a couple of weeks. 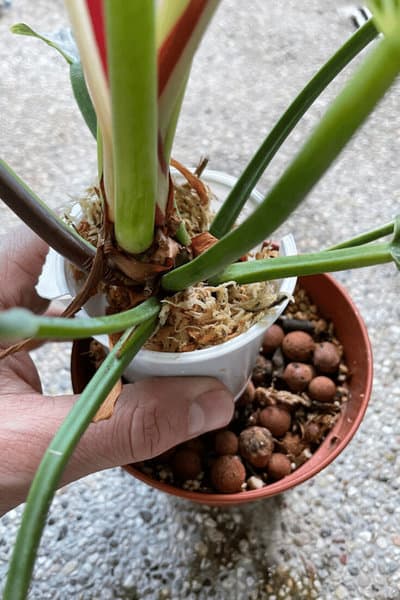 Frequently Asked Questions About How to Propagate Philodendron birkin

Is it easy to propagate a Philodendron birkin from a cutting?

Propagating a Philodendron birkin from a cutting is quite easy, as long as you carefully follow all the steps. You will need to take the cutting from the correct place, keep it in water until the roots are long enough and then plant it out carefully.

Is propagating a Philodendron birkin the same as growing it from seed?

Growing a plant from seed literally means getting seeds, planting them in the ground, or keeping them in damp cotton, until they germinate. The Philodendron birkin seeding must then be planted into a pot and the plant will grow. Propagating a plant means creating a new plant from an existing adult plant.

Conclusion About How to Propagate Philodendron birkin

Propagating a Philodendron birkin from a cutting, or by division, or through air layering is very satisfying and means you will have a new plant relatively quickly. Provided you take the necessary time and follow all the steps for the method you choose, you will be able to propagate the Philodendron birkin successfully.