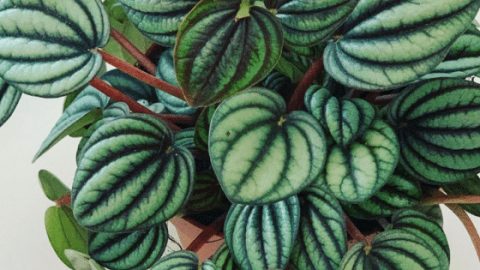 If you are a fan of uniquely patterned leaves, you definitely need a Peperomia Albovittata (pep-er-ROH-mee-uh al-boh-vy-TAY-tuh).

This plant is commonly found in the Netherlands. Similar to its cousins, this plant is a perennial that is known for its attractiveness and is one of the best house plant gifts.

The Peperomia Albovittata prefers its soil to be loamy, with a mixture of charcoal, worm compost, orchid bark, and coco fiber. The Peperomia Albovittata also prefers humidity levels of up to 50% since this helps them retain the water in their succulent leaves. Another requirement is the average indoor temperature of about 68 to 86 degrees Fahrenheit (20-30 degrees Celsius).

The patterned leaves in shades of green, purple, and black create a unique look. The patterns on the leaves give a 3D effect to the plant.

This plant has an epiphytic growing habit, and like many other Peperomia, it too is a succulent plant.

Peperomia Albovittata does not only have one name; it is also known as Ivy Leaf Peperomia, Piccolo Banda, and is often referred to as a radiator plant, which is a common name that is given to every species of Peperomia.

Peperomia Albovittata is an epiphytic plant, which means they grow best in a soilless potting medium. However, this plant can also thrive in a standard potting mix, but this potting mix should not contain peat moss.

You could also use a commercial cactus mix as an alternative; some of the ingredients you can add are:

If you tend to use regular potting mix for your soil, then use the half and half method by adding in lighter ingredients to the mix, such as:

Peperomia Albovittata does not need to be watered often as it is a succulent plant that tends to retain water. You can water your plant when the top two inches of the soil starts to feel dry.

Watering may seem like the easiest part of Peperomia Albovittata, but this is the step where people often end up going wrong.

Over-watering is a common issue with Peperomia Albovittata, as many individuals tend to panic and water their plants unnecessarily.

If you wish to avoid over-watering your plant, then keeping a water log for every month is a good idea.

You can also look for signs of overwatering by checking the leaves, roots, and stem.

I water my Peperomia Albovittata after seven to ten days, but I always check the soil for dryness to ensure that I water them even before reaching the seven-day mark, only if necessary.

Peperomia Albovittata grows well under bright, indirect sunlight. You should place them on a window facing east or west throughout the year.

Avoid keeping your plant under direct sunlight and reduce the amount of sunlight your plant gets during the summer season, as it can cause the leaves to burn.

If you place your plant in an area where it is receiving less sunlight, then it can become leggy as it will try to stretch towards the light.

When this happens, simply prune the elongated area of the plant as it will help it remain compact. Make sure to move your plant to an appropriate location once you notice this elongation.

Peperomia Albovittata prefers to stay in warm temperatures ranging from 68 to 86 degrees Fahrenheit (20 to 30 degrees Celsius).

During the winter season, the Peperomia Albovittata can tolerate temperatures as low as 59 degrees Fahrenheit (15 degree Celsius), but temperatures lower than this can kill your plant.

Thus, you need to move the plant indoors if you have placed it out-doors.

Try to keep the humidity levels around your Peperomia Albovittata between 40 to 50 percent to avoid any form of fungus forming on the plant.

Peperomia Albovittata does not require a lot of fertilization. Individuals face problems with over-fertilizing this plant but never under fertilizing it. I tend to use balanced water-based fertilizer with a 10:10:10 ratio only once a month.

Fertilizing your Peperomia Albovittata during the growing season is more important compared to any other season.

You need to be extremely careful with the fertilizer as excess fertilizer can cause toxicity of some nutrients, leading to your plant wilting or dying.

You can also use standard houseplant fertilizers with pellet, granular, stick, or liquid form. Peperomia Albovittata tends to respond well to liquid fertilizers.

You can fertilize your plant from spring to autumn, but never fertilize it during winter.

Peperomia Albovittata does not need to be repotted often and tends to grow better in pots that are a little bit small for them.

Thus, you can keep your plant in the same pot that you planted it in, as it is unlikely that any harm would be caused to it.

The general rule of thumb is to repot your plant after three years as it will prevent the potting mixture from becoming compact, which would reduce the soil drainage over time.

You can also repot your Peperomia Albovittata in a smaller or a slightly bigger pot (1 or 2 inches bigger) than the previous one.

When you repot your plant:

You do not need to worry about your plant getting damaged while pruning it as the likelihood of anything happening to it are really low. Use this opportunity to trim off any dead leaves and diseased areas of the plant.

The method of propagation you choose depends on your personal preference and what you find easy.

Slowly you will notice that new roots have started to form on the cut edge. You will then see new shoots growing, which will eventually have leaves of them.

Once your plant has several new leaves and roots, you will have to remove the covering around it and place it next to the rest of your plants.

If you used a propagation tray, then you do not need to move the plant into a pot quickly, as Peperomia Albovittata tend to have a shallow root structure, which won’t make the plant overly restricted.

The other method you can try to propagate Peperomia Albovittata is by stem cutting. This form of propagation must be done in spring as the plant will be in its growing stage:

This plant does not have attractive blooms; it is just long green spikes classified as inflorescence. However, the leaves are strikingly gorgeous.

Peperomia Albovittata is a small plant that tends to grow slowly. Once this plant has matured, you will notice its bushy appearance, but it can grow no more than eight to twelve inches tall (20 to 30 cm).

This variety standout among other houseplants because of the thick, succulent leaves that grow in shades of silver, green with heavy veining.

These leaves have the most stunning color mixture. The leaves are green in color, but they also have maroon veins visible all over them. Even the stem on this plant has a red color that makes the plant look fleshy.

For Peperomia Albovittata, the biggest problem they face throughout their life is their chances of encountering Pythium as it can quickly kill your healthy plant.

This fungal infection will cause the roots and stems of your plant to rot. This fungus thrives in anaerobic conditions present in waterlogged soil.

The Pythium can move from one stage to another quickly, allowing the roots of your plant to rot easily. If you observe your plant closely and notice black spots forming on top of the stems, then it might be a bit too late for you to recover your full-grown plant.

Some of the first signs of this fungal infection include drooping plant, wilting, or a generally less vibrant plant.

You can spot Pythium by carefully observing your soil and inspecting the roots of your plant. If the roots have become soggy and delicate, then you remove some of them so that the plant can survive.

Alternatively, trim the roots of the plant heavily and repot it into a new pot with a new potting mix.

The Cercospora leaf spot is lesions that show up on the plant. These lesions can be 1/8 inch in diameters when they have matured. They have a gray color to them and can also look brown with a purple border.

When a plant has several of these lesions on it, then it can easily wither or die. The best remedy for an infected plant is isolation from the others and the removal of all the infected portions of the plant.

It is best to remove the whole leaf, even if only a section of it has these lesions on it. Prune your plant aggressively to ensure it survives. Make sure to use sanitized equipment to reduce the risk of fungal infection.

Fungus gnats are black flies that are noticeable in the soil of the infected plant. They are small in size but can cause a lot of damage to your plant.

The larvae of fungus gnat feed on the roots of Peperomia Albovittata, which causes the plant to die. The adult themselves are not a direct danger to your plant.

To avoid fungus gnats, avoid watering your plant from the top and only pour the water straight into the soil.

Mealybugs have a white appearance and appear mostly on the lower surfaces of leaves and on roots. They build up a mold on leaves, which causes the plant to get infections; thus, causing stunted growth.

Mites are tiny pests that tend to remain undetected for long periods of time. This causes them to multiply a lot faster. You won’t notice your plant has been infected by mites until after they have done their deed.

Mites focus on necrotic areas of the leaves, which causes stunted growth. To control the spread of mites, you need to cover your plant in pesticidal soap or use a spray.

When you decide to keep a Peperomia Albovittata, there are a few things you must keep in mind to ensure proper growth, such as:

How often should I water my Peperomia Albovittata?

Peperomia Albovittata are succulent plants; thus, they do not require a lot of water. Even if you do not water it for a week, it will survive.

Should I mist my Peperomia Albovittata?

Peperomia Albovittata does not like to be misted often as it can cause fungus growth on them.

Why are the leaves of my Peperomia Albovittata wilting?

The cause of this issue can be related to either overwatering or underwatering. To know exactly which one, try to keep a record of the watering session by writing down how many times you have watered your plant in a week or month.

Peperomia Albovittata is a plant that is meeting the trends of indoor plants with its eye-catching leaves. This is considered to be an excellent plant gift for a house warming party because of the unique leaves.

This plant can be taken care of by almost anyone. Since the plant does not need direct sunlight, you can easily place it in one good position and won’t ever have to move it until necessary. 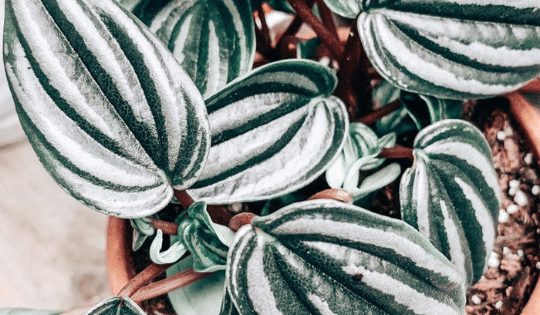 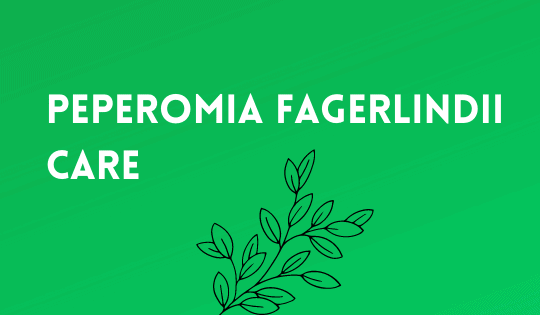 Next
Peperomia Fagerlindii - An Indoor Gardeners Guide
Comments are closed.